Animation Cowboy is an awarded design & animation studio that give a variety of visual solutions to companies & start-ups. www.anicowboy.com

Zuzu - Application Brand Video. About this application video production: Exercising is in everybody’s new year’s resolution every year, and yet most of them seem to give up on the first month of the year. 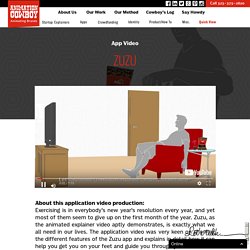 Zuzu, as the animated explainer video aptly demonstrates, is exactly what we all need in our lives. The application video was very keen on showing the different features of the Zuzu app and explains in detail how it can help you get you on your feet and guide you through your workout. It shows how it can even recommend the right workout regimen for your specific body type. It can customize your workout based on what you want with your body. The app video makes Zuzu look like the perfect fitness app that will finally keep us on track of our new year’s resolution to stay fit and healthy. Animated Video and Graphic Creation Blogs - Animation Cowboy. Breaking into the world of crowdfunding can seem daunting, especially on the upscale level of equity crowdfunding. 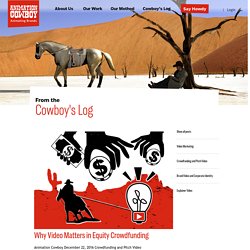 There are so many questions from how best to advertise to investors to how much focus should be put into the crowdsourcing campaign. However, the solution to all of your crowdsourcing woes is quite simple: video. Video has become one of the most effective advertising media for crowdfunding of all kinds, and a first-rate video is one of the best ways to bring in investors. Here are a few things that anyone interested in equity crowdfunding with video should know: What is equity crowdfunding? Meytal Cohen - Crowdfunding Video. About this crowdfunding video: Attention all heavy metal fans out there, the band Meytal is about to drop their debut album for everyone to hear. 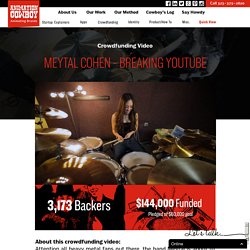 One of the founding members and drummer of the band, Meytal Cohen took it on herself to raise money for the band. With the help of Animation Cowboy, the band was able to upload a marketing video. Spaceek. Crowdfunding Animated Video Film Production - Animation Cowboy. Video is one of the best ways to help you connect to your audience emotionally and intellectually and keep them engaged as they explore what your crowdfunding operation is all about. 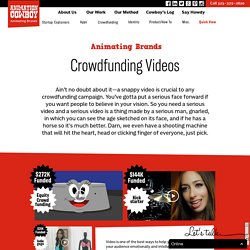 In fact, an in-depth look at kickstarter or any other crowdfunding website will reveal that crowdfunding operations tend to do significantly better—have more views, more contributions, and a higher rate of success—when they include video. Why video is so engaging to audiences? Here’s a quick round-up: Video catches the attention quickly. Whereas in order to grab the attention of someone browsing through hundreds of crowdfunding projects simply with text you would need to say something extremely exciting or surprising in your very first line of text—and even this still seems rather dull—having a video with an interesting or attractive thumbnail up can snag a viewer much faster and make them more interested in you from the moment they catch a glimpse of your project. 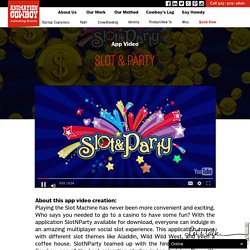 Who says you needed to go to a casino to have some fun? With the application SlotNParty available for download, everyone can indulge in an amazing multiplayer social slot experience. This application comes with different slot themes like Aladdin, Wild Wild West, and even a coffee house. Trymms - Explainer application video. About this startup app video: This generation lives in a world being run by mobile applications. 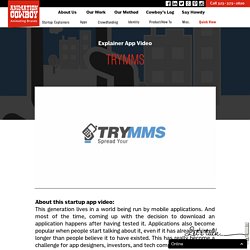 And most of the time, coming up with the decision to download an application happens after having tested it. Applications also become popular when people start talking about it, even if it has already existed longer than people believe it to have existed. This has really become a challenge for app designers, investors, and tech companies. But thanks to explainer video production companies, the introduction of the applications to the world becomes a piece of cake. The TryMMS application video was designed from the 2d animation studios of Animation Cowboy to boost the capability of the application in promoting your business. . © 2016 Animation Cowboy Ltd. | Heb. Winkapp - Product Explainer Video. Spaceek. Weevi - Explainer application video. After reviewing animation cowboy's full portfolio there was no doubt that Avi is incredibly talented and super skilled but only after we met to discuss our companies needs and vision I understood that he's much more than "just talented". 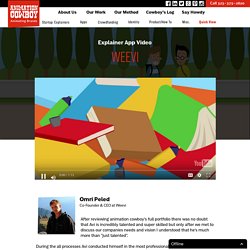 During the all processes Avi conducted himself in the most professional way there is when his deepest concern was keeping us happy and satisfied but still making sure we won't make any rookie mistakes. While creating a beautiful and a super creative video Avi managed to always keep us in the loop on every decision and keeping the highest standards as well. Avi is all about the product and how to present a complicated idea in an effective and understandable way while keeping it unique and beautiful. I highly recommend Avi and Animation cowboy. Once again, thank you from the all Weevi Team!! Omri Peled. 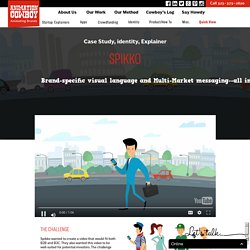 Startup Explainers Apps. Parkey - Explainer application video. About this best Explainer video: The struggle is real for the modern city dwellers and urban warriors in looking for the perfect parking space for their car. 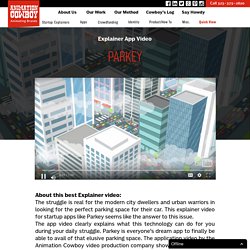 This explainer video for startup apps like Parkey seems like the answer to this issue. The app video clearly explains what this technology can do for you during your daily struggle. Parkey is everyone’s dream app to finally be able to avail of that elusive parking space. The application video by the Animation Cowboy video production company shows how Parkey can help us reserve parking spaces even while still being on the road. The animated explainer video makes you more excited over the benefits of Parkey and how it will help you deal with one seemingly small task, but which can effectively ruin or make your day. Go Back © 2016 Animation Cowboy Ltd. | Heb. The Way of the Monk - Application Identity Video. 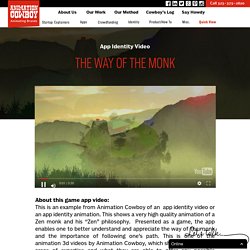 This shows a very high quality animation of a Zen monk and his “Zen” philosophy. Presented as a game, the app enables one to better understand and appreciate the way of the monk and the importance of following one’s path. This is one of the animation 3d videos by Animation Cowboy, which shows each of their areas of expertise and what they are able to offer any possible customer. It is a great marketing video for the app, as it enables the customers to get a glimpse of what it’s like and where they can download it from. . © 2016 Animation Cowboy Ltd. | Heb. Application Explainer Video Production Services - Animation Cowboy. Mobile applications are an exciting field because virtually anyone with a good idea and a bit of talent can design an app that changes the world.

In fact—as many designers, investors, and tech companies quickly realize—creating the app itself is not always the most difficult aspect of attaining success. The true challenge lies in getting your message out there. Jammmz - Product Promotion Video. Techsee - Animated Explainer Video. About this explanatory video production: Is your life on hold because you don’t have the slightest idea on how to get your new television or internet together? And would it even take longer because you need to call customer support? Even worse, they might mix all the information up, requiring you to wait for a technician to solve your problems.

With this marketing video in digital 3d animation, there was a precise explanation regarding the use of rubber bands versus micromagnetic balls in the correction of jaw movements, particularly in the world of orthodontics. . © 2016 Animation Cowboy Ltd. | Heb. Storalife - Product Explainer Video. About this startup Explainer video: Storing data is one of the most essential necessities nowadays--from text messages, emails, personal write-ups, photos, and videos. Various platforms offer storage for data in different size capabilities. These can be your personal computer, social media, cloud services, or maybe earlier forms of back up devices. All of us may have all of these kinds of storage platforms, but doesn’t it get too confusing? Can you still remember where you saved what? Novisign - Series of Product Explainer Videos. Cloud Endure - Explainer Pitch Video. Case Study, identity, Explainer We helped show investors that this simple solution to system downtime was worth their attention (and their funding!)

Webee - Explainer TV application video. About this educational video production: In this marketing video, Animation Cowboy, a 2d animation studio, highlights the benefits of Webee as an alternative app for young children’s TV viewing habits. It shows how Webee is superior to watching cartoons on TV, as it is an educational app that allows children to learn while having fun watching the cute cartoon characters at the sesame time. The pitch video also highlights the app’s various features, such as the Learning Management System that can help monitor and track the child’s learning progress.

They allow companies to explain new products, services, and ideas quickly and efficiently while being both entertaining and informative. They have become extremely common in a very short period of time--a fact that demonstrates both how effective and how necessary explainer videos are. Contact Explainer Video Production Company - Animation Cowboy. Animated Video and Graphic Creation Blogs - Animation Cowboy. Crowdfunding is becoming increasingly popular, and countless people are now using crowdfunding platforms to jump onto the bandwagon with their million-dollar ideas.

This is because crowdfunding has now made the once costly, lengthy, even painstaking process of fundraising for a business idea easy, simple and accessible to nearly anyone who wants to take a shot at it. However, the relative simplicity of crowdfunding also has its downside. Because there are so many people now using it as a means of funding projects, it can sometimes be difficult for potential donors to discern between legitimate business ideas and half-brained projects (or even jokes).