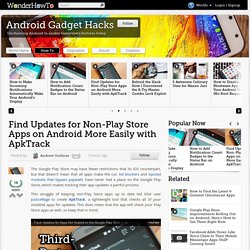 Ad blockers and Xposed modules that bypass paywalls have never had a place on the Google Play Store, which makes tracking their app-updates a painful process. This struggle of keeping non-Play Store apps up to date led XDA user JusticeRage to create ApkTrack, a lightweight tool that checks all of your installed apps for updates. This does mean that the app will check your Play Store apps as well, so keep that in mind. Step 2: Check for Updates.

The 5 Building Blocks of Visual Hierarchy in Web Design. Jerry Cao is a UX content strategist at UXPin — the wireframing and prototyping app. 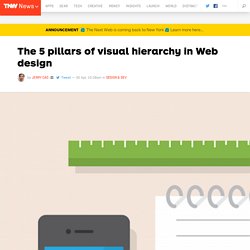 To learn more about how to create visually digestible interfaces, download the free e-book Web UI Design for the Human Eye: Colors, Space, Contrast. Visual hierarchy is the difference between a site that strategically influences user flow and decisions, and a site that just “looks nice.” An interface’s visual hierarchy relies on the same principles of aesthetics used by the Renaissance masters, but on top of that (or rather beneath it) there’s the subtext of secondary goals – promoting specific content, encouraging user signups and call-to-actions, and generally improving the overall experience so users enjoy their visit beyond just accomplishing their goals. Source: ShareFaith Seems like the Renaissance masters got off easy. OneLiners.co is Like 99designs for Company Taglines. When you spend days and nights working on a startup, it can be hard to condense the core of your product down to a handful of words. 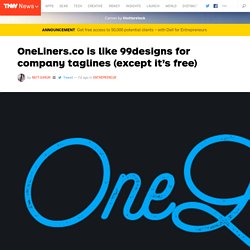 For frustrated entrepreneurs and marketers alike, OneLiners.co wants to help you crowdsource catchy taglines. How to Turn Your PC (or Other Device) Into a Retro Arcade with Lakka. How to Embed Classic MS-DOS Games in Your Tweets. Microsoft's Visual Studio Code Is Based On GitHub Atom. Microsoft released its first cross-platform code editor to great fanfare yesterday, but it’s not quite what it appears when you peek under the hood. 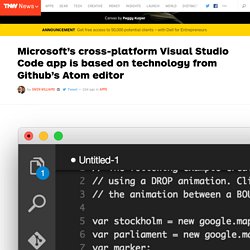 Visual Studio Code is based on technology found in GitHub’s open-source code editor, Atom. If you crack into the files, you’ll notice a number of binaries are named “atom.exe” on Windows and on OS X a peek inside the Application shows a number of Atom resources. Windows 10 is Now Available on Raspberry Pi and Arduino. Microsoft is aiming at making Windows 10 the OS for all connected devices, and now it’s aiming at the Internet of Things by releasing a build for Raspberry Pi and Arduino. 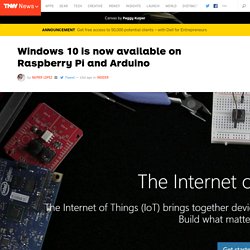 The developer preview for Windows 10 IoT Core insider will work with the Raspberry Pi 2, MinnowBoard Max and Intel Galileo. Otherwise, you can connect with other Arduino devices through Windows Remote and Windows Virtual Shields. You can download Windows 10 IoT Core here. And though Windows for the Internet of Things is just getting started, Microsoft’s has already prepared some projects you can work on. ➤ Windows 10 IoT Core Read next: Everything Microsoft announced at Build 2015: Day 2. You Can Now Try Office 2016. How to Free Yourself from Food Cravings with Intermittent Fasting. Declutter Your Entire Home with This 8-Week Plan. AntiAdware Gets Rid of Bundled Crapware on Popular Download Sites. The Biggest Concerns About GMO Food Aren't Really About GMOs. The Expandable Home Screen. Nine Things Every Steam User Should Know About. How to Stream or Record Your Games for Broadcast Online.

3 Crazy Excel Formulas That Do Amazing Things. Excel formulas can do almost anything. 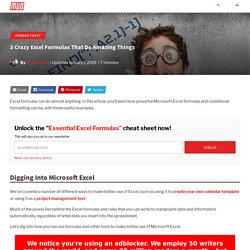 In this article, you’ll learn how powerful Microsoft Excel formulas and conditional formatting can be, with three useful examples. Much of the power lies behind the Excel formulas and rules that you can write to manipulate data and information automatically, regardless of what data you insert into the spreadsheet. 2 Android Tools To Turn Your Boring Phone Videos Into Awesome Clips. Video is an interesting thing. 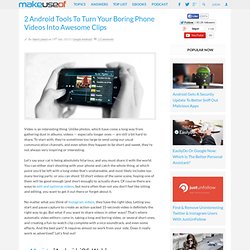 Unlike photos, which have come a long way from gathering dust in albums, videos — especially longer ones — are still a bit hard to share. To start with, they’re sometimes too large to send using our usual communication channels, and even when they happen to be short and sweet, they’re not always very inspiring or interesting. Let’s say your cat is being absolutely hilarious, and you must share it with the world. Cool Websites and Tools [July 18th 2013] Stealing Passwords With An Android App Is Easy: Learn How To Protect Yourself. Advertisement You read that headline right: If you and I were on the same WiFi network, I could probably log in to some of your sensitive accounts — and I’m not even a hacker. 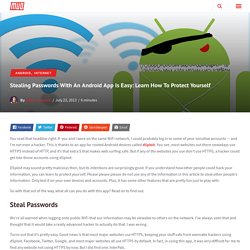 This is thanks to an app for rooted Android devices called dSploit. VapourWeb. New GO TaskManager EX Add-On Lets You Erase Android App History Items. If you’ve been using Android, you must have come across the name GO Launcher EX at some point. 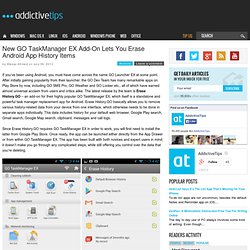 After initially gaining popularity from their launcher, the GO Dev Team has many remarkable apps on Play Store by now, including GO SMS Pro, GO Weather and GO Locker etc., all of which have earned almost universal acclaim from users and critics alike. The latest release by the team is Erase History.GO – an add-on for their highly popular GO TaskManager EX, which itself is a standalone and powerful task manager replacement app for Android. Erase History.GO basically allows you to remove various history-related data from your device from one interface, which otherwise needs to be done in separate apps individually.

This data includes history for your default web browser, Google Play search, Gmail search, Google Map search, clipboard, messages and call logs. BZR Is A Sleek Portable Music Player With Support For 480 Formats. Almost everybody likes listening to music, and that’s why OS vendors ship a media player bundled with their operating systems, just like Windows Media Player comes with Microsoft Windows out of the box to let you quickly play your local music library. 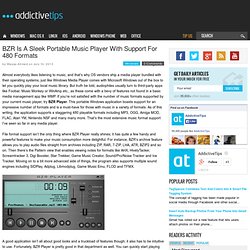 But truth be told, audiophiles usually turn to third-party apps like Foobar, Music Monkey or WinAmp etc., as these come with a bevy of features not found in a basic media management app like WMP. If you’re not satisfied with the number of music formats supported by your current music player, try BZR Player. This portable Windows application boasts support for an impressive number of formats and is a must-have for those with music in a variety of formats. As of this writing, the application supports a staggering 480 playable formats including MP3, OGG, Amiga MOD, FLAC, Atari YM, Nintendo NSF and many many more. That’s the most extensive music format support I’ve seen so far in any media player. Nucleus Adds A Menu Bar With A Quick Dropdown Terminal To Windows. Nucleus is a desktop application that brings a universal menu bar to Windows. Although, still in active development and available as an alpha release, Nucleus carries a host of features from the menu bars of some popular operating systems like Mac OS X and Ubuntu Linux, successfully bringing them to Windows.

If you haven’t worked on such an OS before, the menu bar, unlike the Taskbar in Windows, displays a horizontal bar at the top of the screen, from where you can perform different system-related tasks. Nucleus is a portable application, therefore you don’t need to install it on your system. Simply download the ZIP archive from the link provided below, extract the included files and run the program. When launched, it adds a small menu bar at the top, sporting a really nice dark gray theme. To the far left of the bar is the main menu, from where you can exit Nucleus, reset its layout, restart or shutdown the computer, and open the Settings panel. Compare Two Fonts By Superimposing One Over The Other Using Tiff. Selecting the right font for a project can get to be quite tough, and not simply because of the large variety of fonts that exist. For the untrained eye, spotting the differences between certain similar-looking fonts can be really difficult because you might not know what to look for.

If you think about how some fonts have very subtle differences to begin with, you might wonder if it is at all possible to distinguish one from the other without some tedious examination. Tiff is a web app that makes this process simple. Floating Touch: AssistiveTouch-Like Persistent Launcher For Android. If you’re an Android user who has at any point admired something about iOS, then you probably didn’t have to wait long before someone developed an app to mimic that same feature for your device. Floating Touch is one such Android app that doesn’t just imitate AssistiveTouch on the iPhone, but actually does it better by giving users the freedom to choose what controls are added to their screen (a little like previously reviewed Easy Touch). What if Pixar's films are all part of one epic, apocalyptic narrative? Pixar famously scatters easter eggs throughout its films that point to the movies that came before them and to the movies that are coming next.

It seems like a way for the always-charming movie studio to have a little bit of fun with its fans — but what if those easter eggs were more than just casual connections? One theory suggests just that by compiling a single master narrative through all of Pixar's feature films, from the first Toy Story through Monsters University. In the theory, published Thursday by blogger Jon Negroni, Pixar's films fall into roughly three groups within the same universe: first are films with intelligent animals, second are films with complex machines, and third are films in an apocalyptic future filled mainly with insects and mutant animals. The narrative spans a history from medieval times to the present day and well beyond, detailing a complex series of evolutions and inventions that make it all possible.

Pearltrees tips. 20 Tools for Creating and Delivering Amazing Presentations. If you're in business, you need to know how to create captivating presentations. Whether you're trying to convince your boss to support a new campaign, talking with a prospect to close a deal, or building a new piece of marketing collateral, you need to know how craft a presentation that won't put people to sleep. The best (and easiest) way to do that?

Use the right tools to create and deliver your presentation.