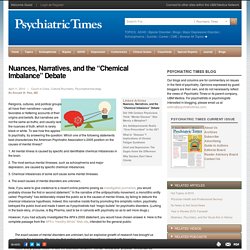 But narratives are not the same as truths, and usually lack the nuances of truth, which is rarely black or white. To see how this applies to psychiatry, try answering the question: Which one of the following statements best characterizes the American Psychiatric Association’s 2005 position on the causes of mental illness? Are Mental Illnesses Caused by "Chemical Imbalances?" - Pete Earley. FROM MY FILES FRIDAY: Is there such a thing as a “chemical imbalance?” 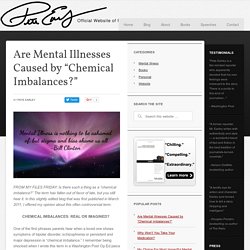 The term has fallen out of favor of late, but you still hear it. In this slightly edited blog that was first published in March 2011, I offered my opinion about this often controversial term. One of the first phrases parents hear when a loved one shows symptoms of bipolar disorder, schizophrenia or persistent and major depression is “chemical imbalance.” I remember being shocked when I wrote this term in a Washington Post Op Ed piece and was confronted by someone who told me there is absolutely no scientific evidence that mental illnesses are caused by chemical imbalances in the brain.

Immunotherapy fights cancer better with both arms of the immune system, say researchers. The treated mice developed immunological memory; when the researchers injected them with tumor cells months later, their immune systems destroyed them. 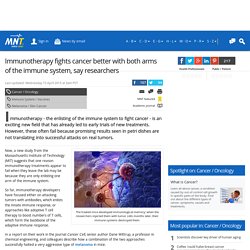 Now, a new study from the Massachusetts Institute of Technology (MIT) suggests that one reason immunotherapy treatments appear to fail when they leave the lab may be because they are only enlisting one arm of the immune system. So far, immunotherapy developers have focused either on attacking tumors with antibodies, which enlists the innate immune response, or approaches like adoptive T cell therapy to boost numbers of T cells, which form the backbone of the adaptive immune response. In a report on their work in the journal Cancer Cell, senior author Dane Wittrup, a professor in chemical engineering, and colleagues describe how a combination of the two approaches successfully halted a very aggressive type of melanoma in mice. Making IL-2 hang around longer boosts anti-tumor antibody therapy So Prof. 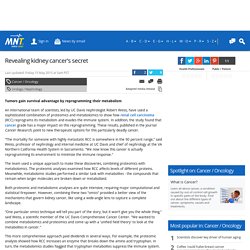 In addition, the study found that cancer grade has a major impact on this reprogramming. These results, published in the journal Cancer Research, point to new therapeutic options for this particularly deadly cancer. Scientists discover key driver of human aging. Salk Institute findings on premature aging syndrome could lead to slowing or reversing the aging process. 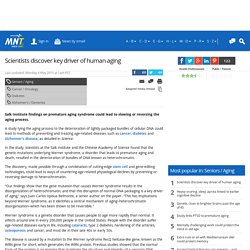 A study tying the aging process to the deterioration of tightly packaged bundles of cellular DNA could lead to methods of preventing and treating age-related diseases such as cancer, diabetes and Alzheimer's disease, as detailed in Science. In the study, scientists at the Salk Institute and the Chinese Academy of Science found that the genetic mutations underlying Werner syndrome, a disorder that leads to premature aging and death, resulted in the deterioration of bundles of DNA known as heterochromatin. The discovery, made possible through a combination of cutting-edge stem cell and gene-editing technologies, could lead to ways of countering age-related physiological declines by preventing or reversing damage to heterochromatin. Werner syndrome is a genetic disorder that causes people to age more rapidly than normal. Researchers provide further insight into male bias of autism.

A 2:1 or 3:1 male to female autism spectrum disorder prevalence bias is frequently reported in studies. 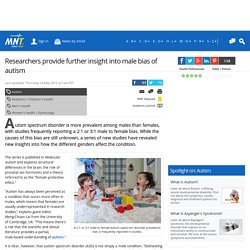 The series is published in Molecular Autism and explores structural differences in the brain, the role of prenatal sex hormones and a theory referred to as the "female protective effect. " "Autism has always been perceived as a condition that occurs more often in males, which means that females are usually underrepresented in research studies," explains guest editor Meng-Chuan Lai from the University of Cambridge, UK. "This means there's a risk that the scientific and clinical literature provides a partial, male-based understanding of autism. " It is clear, however, that autism spectrum disorder (ASD) is not simply a male condition.

"Delineating the role that sex and gender play in the characteristics of autism, across multiple levels, may inform both our ability to identify the condition and lead to a greater understanding of its developmental psychology and biology," says Dr. Yoga and chronic pain have opposite effects on brain gray matter. Chronic pain is known to cause brain anatomy changes and impairments, but yoga can be an important tool for preventing or even reversing the effects of chronic pain on the brain, according to a National Institutes of Health (NIH) official speaking at the American Pain Society's annual meeting. 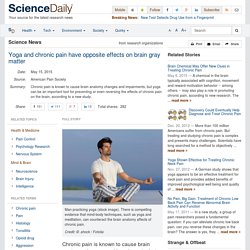 M. Catherine Bushnell, PhD, scientific director, Division of Intramural Research, National Center for Complementary and Integrative Health, NIH, explained in a plenary session address that many chronic pain patients show associated anxiety and depression as well as deficits in cognitive functions. In addition, brain imaging studies in rats and humans have shown alterations in gray matter volume and white matter integrity in the brain caused by the effects of chronic pain.

"Imaging studies in multiple types of chronic pain patients show their brains differ from healthy control subjects," said Bushnell. Kids with ADHD must squirm to learn, study says. For decades, frustrated parents and teachers have barked at fidgety children with ADHD to "Sit still and concentrate! 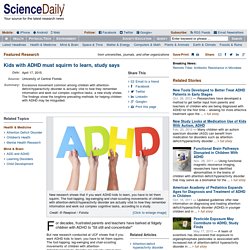 " But new research conducted at UCF shows that if you want ADHD kids to learn, you have to let them squirm. The foot-tapping, leg-swinging and chair-scooting movements of children with attention-deficit/hyperactivity disorder are actually vital to how they remember information and work out complex cognitive tasks, according to a study published in an early online release of the Journal of Abnormal Child Psychology. The findings show the longtime prevailing methods for helping children with ADHD may be misguided. "The typical interventions target reducing hyperactivity. Antibody's unusual abilities might inspire vaccine strategies. The antibody shows promise both for stopping E. coli from adhering to cells and for dislodging it E. coli bacteria showing the appendages used to adhere to other cells. 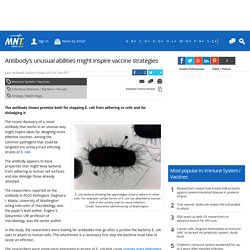 For example, certain forms of E. coli can attached to human cells in the urinary tract to cause infection. Credit: Sokurenko lab/University of Washington. Cancer cells 'disguise themselves as immune cells' to spread via lymphatic system, study finds. The study shows how cancer cells take on the guise of immune cells to gain entry to the lymphatic system. 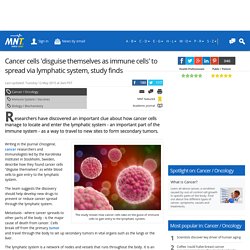 Writing in the journal Oncogene, cancer researchers and immunologists led by the Karolinska Institutet in Stockholm, Sweden, describe how they found cancer cells "disguise themselves" as white blood cells to gain entry to the lymphatic system. The team suggests the discovery should help develop new drugs to prevent or reduce cancer spread through the lymphatic system. Metastasis - where cancer spreads to other parts of the body - is the major cause of death from cancer.

Cells break off from the primary tumor and travel through the body to set up secondary tumors in vital organs such as the lungs or the liver. The lymphatic system is a network of nodes and vessels that runs throughout the body. Cancer cells frequently use the lymphatic system to travel to other parts of the body. Superbug warning to drug giants. AP (June 26, 2014) — Despite the ick factor, some doctors have called fecal transplants a near miraculous treatment for recurrent infections from an antibiotic-resistant, often deadly, superbug.

(June 26) Video provided ... watch video TheStreet (May 9, 2014) — The National Institute for Drug Abuse, or NIDA, has asked the Drug Enforcement Agency for more marijuana. Drug perks up old muscles and aging brains. Whether you're brainy, brawny or both, you may someday benefit from a drug found to rejuvenate aging brain and muscle tissue. Researchers at the University of California, Berkeley, have discovered that a small-molecule drug simultaneously perks up old stem cells in the brains and muscles of mice, a finding that could lead to drug interventions for humans that would make aging tissues throughout the body act young again. "We established that you can use a single small molecule to rescue essential function in not only aged brain tissue but aged muscle," said co-author David Schaffer, director of the Berkeley Stem Cell Center and a professor of chemical and biomolecular engineering.

"That is good news, because if every tissue had a different molecular mechanism for aging, we wouldn't be able to have a single intervention that rescues the function of multiple tissues. " The UC Berkeley team reported its results in the current issue of the journal Oncotarget. Depressed stem cells lead to aging. BioMed Central. Medical News Today: The Latest Health News. NSF - National Science Foundation. Proceedings of the National Academy of Sciences. Stanford News. EurekAlert! Science News. ScienceDaily: Your source for the latest research news. Psychology Today: Health, Help, Happiness + Find a Therapist. Child Development Advice And Parenting Help For Parents.