Body. 1 The opening line of Shelley's 'Hymn To Intellectual Beauty' 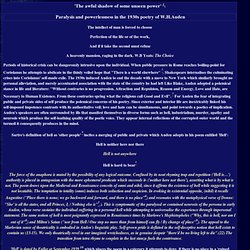 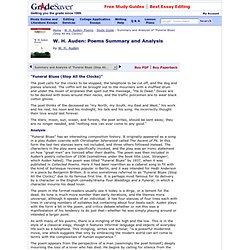 The coffin will be brought out to the mourners with a muffled drum and under the moan of airplanes that spell out the message, “He Is Dead.” Doves are to be decked with bows around their necks, and the traffic policemen are to wear black cotton gloves. The poet thinks of the deceased as “my North, my South, my East and West,” his work and his rest, his noon and his midnight, his talk and his song. He incorrectly thought their love would last forever. W.H. Auden: A few thoughts. W.H.Auden, Collected Short Poems 1927-1957 (London: Faber, 1966) This semester at university I opted for a module on British Poetry post-1930 and thus over the coming weeks I will hopefully be disciplined enough to delight or bore you with my ramblings on works by writers such as Auden, Larkin, Plath, Ted Hughes plus various others (Heaney, Muldoon anyone?). 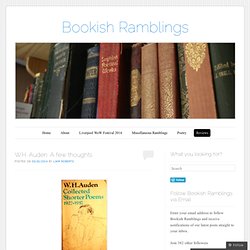 I’m thrilled to get the chance to study and discuss such wonderful writers and can’t wait to get my teeth into them! Exciting times. This week we set the ball in motion by looking at W.H.Auden and the poetry of the nineteen-thirties. A poet I’d shamefully never read before, simply reading parts of his biography made me eager to get my hands on the poetry (Coincidently I also found out that Auden refused to write his own autobiography or collaborate in the production of his own biography as he believed that a poet’s life offers no insight whatsoever into the poetry.

Auden seems to me a poet of variety. Thanks for reading Like this: Helping Bloggers, Helping Students - Ask Will Online: Poem Analysis. Blake Morrison marvels at Night Mail. Steam, coal, levers, pistons, the bright-lit faces of British working men: no film better expresses the concerns and ambitions of the British documentary movement of the 1930s than Night Mail. 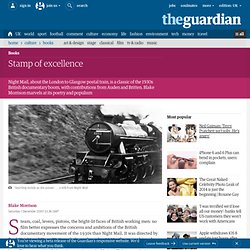 It was directed by Basil Wright and Harry Watt, and when released in 1936, after an acclaimed premiere at the Arts Theatre, Cambridge, became the GPO Film Unit's biggest box-office success. Until then, despite the work of Robert Flaherty and others, documentary films were usually regarded as dull, pontificating tracts intended to fill the gap before the "real" entertainment of a main Hollywood feature film. Thinking about poetry.

It’s funny how one thing leads to another, in life, and in reading. 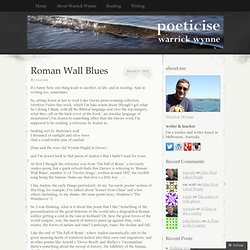 And in writing too, sometimes. So, sitting down at last to read Luke Davies prize-winning collection Interferon Psalms this week, which I’m luke-warm about (though I get what he’s doing I think, with all the Biblical language and over the top imagery, what they call on the back cover of the book ‘ an oracular language of incantation’) I’m drawn to something other than the Davies work I’m supposed to be reading, a reference to Auden in: Soaking wet by Hadrian’s wall I dreamed of sunlight and olive trees And a comfortable pair of sandals. [thus said the wise old Wystan Hugh] in Davies… and I’m drawn back to that poem of Auden’s that I hadn’t read for years. I like Auden, the early things particularly. So, I was thinking, what is it about this poem that I like?

All those poems I’ve mentioned above are worth entries of their own, and maybe I’ll get around to that. Roman Wall Blues. The Wondering Minstrels: Roman Wall Blues. Poetry and Literature Analysis. The Poetry Place. These two poems are ostensibly very different but they make a useful pair for comparison.For example, they are both about threats to life; they both use traditional forms to approach modern themes; they both delay the crux of the 'message' till late in the poem - and so on. 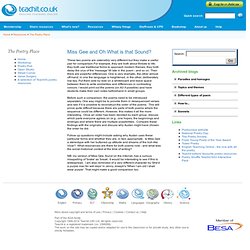 Then there are powerful differences. One is very dramatic, the other almost off-hand; in one the language is heightened, in the other, deliberately low key. Put them side by side on a whiteboard and leave space between them to write similarities and differences in contrasting colours. I would print out the poems (on A3 if possible) and have students make their own notes beforehand in small groups. Before such a comparison, the poems need to be introduced separately. Follow up questions might include asking why Auden uses these particular forms and whether they are, in fact, appropriate. NB: my version of Miss Gee, found on the internet, has a curious misspelling of 'brake' as 'break'.

Poetry Analysis: Refugee Blues-W. H. Auden. The following analysis has been done in answer to a request sent by Amanthi. 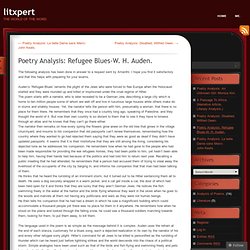 I hope you find it satisfactory and that this helps with preparing for your exams. Auden’s ‘Refugee Blues’ laments the plight of the Jews who were forced to flee Europe when the Holocaust started and they were rounded up and killed or imprisoned under the cruel regime of Hitler. The poem starts with a narrator, who is later revealed to be a German Jew, describing a large city which is home to ten million people some of whom are well off and live in luxurious large houses while others make do in slums and shabby houses. Yet, the narrator tells the person with him, presumably a woman, that there is no place for them there. 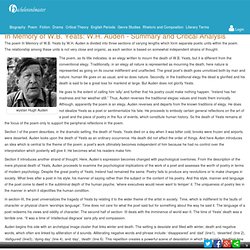 Yeats by W.H. Auden is divided into three sections of varying lengths which form separate poetic units within the poem. The relationship among these units is not very close and organic, as each section is based on somewhat independent strains of thought. JEAS. W.H. 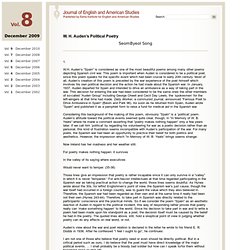 Auden’s “Spain” is considered as one of the most beautiful poems among many other poems depicting Spanish civil war. This poem is important when Auden is considered to be a political poet, since this poem speaks for the specific event which had been crucial to early 20th century. W. H. Auden. W. H. Auden Literary Criticism. A selective list of online literary criticism for the English poet W. 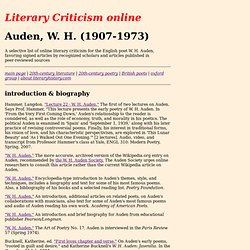