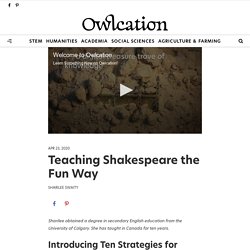 She has taught in Canada for ten years. Introducing Ten Strategies for Teaching Shakespeare With the new implementation of the Common Core State Standards, many teachers are facing the prospect of teaching a Shakespearean play for the first time. If you are looking for some ideas for getting through one of the Bard's play without boring both yourself, and your students, to death, keep reading. I offer some fantastic strategies for teaching Shakespeare the fun way. What are my qualifications? Perhaps you are facing a class full of students who have no interest in reading, never mind reading Thee's and Thou's. This article offers ten strategies for teaching Shakespearean plays to your class You too can introduce the world's great playwright to a bunch of very reluctant teenagers who would rather have been playing video games, or texting their friends.

Don't Be Afraid of the Bard! 1. Director's Chair 2. Technique Description - Unrehearsed Shakespeare Project. When Shakespeare’s company performed, they did so in the open air, under natural light in an environment fraught with distractions. 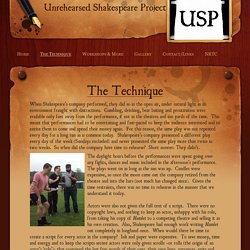 Gambling, drinking, bear baiting and prostitution were available only feet away from the performance, if not in the theatres and inn yards of the time. This meant that performances had to be entertaining and fast-paced to keep the audience interested and to entice them to come and spend their money again. For this reason, the same play was not repeated every day for a long run as is common today. Shakespeare’s company presented a different play every day of the week (Sundays excluded) and never presented the same play more than twice in two weeks. So when did the company have time to rehearse? Shake-sceneshakespeare.co.

Cue script work means an actor prepares their part, their costume, and their character, but without the knowledge of who else is in their scene, what other performers will say, or do, or how that will affect other cast members. 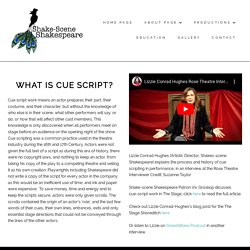 This knowledge is only discovered when all performers meet on stage before an audience on the opening night of the show. Cue scripting was a common practice used in the theatre industry during the 16th and 17th Century. Actors were not given the full text of a script as during this era of history, there were no copyright laws, and nothing to keep an actor, from taking his copy of the play to a competing theatre and selling it as his own creation. Playwrights including Shakespeare did not write a copy of the script for every actor in the company as this would be an inefficient use of time, and ink and paper were expensive.

To save money, time and energy and to keep the scripts secure, actors were only given scrolls. How to Make Cue Scripts - ANTELOQUY. Here are directions for making “Cue Scripts” for any scene from any Shakespeare play.Go to the Internet Shakespeare Editions website: the “Site Search” box (top left), type “Text Statistics” + “Title of Play.” 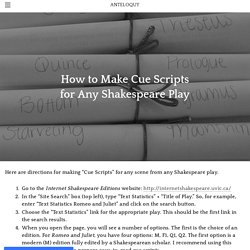 So, for example, enter “Text Statistics Romeo and Juliet” and click on the search button.Choose the “Text Statistics” link for the appropriate play. Whoosh! Bringing Stories Alive through Drama. Whoosh activity: Teaching Shakespeare | Royal Shakespeare Company This engaging and interactive storytelling technique enables any kind of story – simple or complex – to be brought alive, even without prior knowledge of the characters or plot. 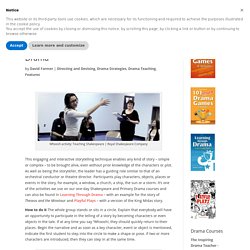 As well as being the storyteller, the leader has a guiding role similar to that of an orchestral conductor or theatre director. Participants play characters, objects, places or events in the story, for example, a window, a church, a ship, the sun or a storm. It’s one of the activities we use on our one-day Shakespeare and Primary Drama courses and can also be found in Learning Through Drama – with an example for the story of Theseus and the Minotaur and Playful Plays – with a version of the King Midas story. How to do it The whole group stands or sits in a circle.

As more characters or objects are introduced, move around the circle so that all the students are given a chance to take part. Types of Comedy: Part One – Physical Comedy. Posted on 14 July 2011 I would love to do an encyclopedic list of ALL types of comedy. 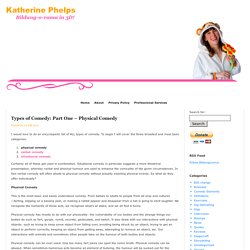 To begin I will cover the three broadest and most basic categories: Certainly all of these get used in combination. Situational comedy in particular suggests a more theatrical presentation, whereby verbal and physical humour are used to enhance the comicality of the given circumstances. In fact verbal comedy will often allude to physical comedy without actually enacting physical events. Physical Comedy This is the most basic and easily understood comedy.