Why Healthcare is Adapting Big Data so Aggressively. Healthcare has always been rich for data generation. 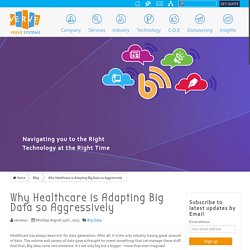 After all, it is the only industry having great amount of data. The volume and variety of data gave a thought to invent something that can manage these stuff. And than, Big data came into existence. It’s not only big but a bigger – more than ever imagined. What iBeacons can do for Enterprises? Whenever asked to enterprises what do they understand by Beacon, they expresses a very basic idea. – A device used to push deals and offers to consumers. 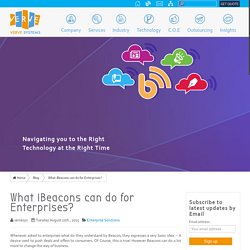 Of Course, this is true! However Beacons can do a lot more to change the way of business. What are Beacons and iBeacons? Beacons are small, low-powered transmitters that communicate with smart devices. Apple’s software implementation of beacons as of iOS 7 used for an indoor positioning system emerged as iBeacon. Track the location of your workforce or things within the organisation iBeacon for indoors provides accurate information not only about the location but also the floor number.

The arrival of wearables is increasingly becoming significant for any of the pharma requisitions. 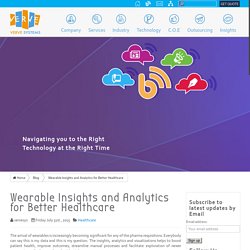 Everybody can say this is my data and this is my question. The insights, analytics and visualizations helps to boost patient health, improve outcomes, streamline manual processes and facilitate exploration of newer avenues in medical research and epidemiology. Analytical insights offered 1. Wearables can be employed for monitoring and gathering vital data pertaining to patients in real time as well as historic modes. Questions to Ask While Hiring an iOS App Developer. When in a situation when you've spent endless hours on your mobile app concept, developed a few wire frames and even had a designer to prepare some artwork for your iOS app, then the last thing you want or can afford is to end up with an app that does not live up to your vision. 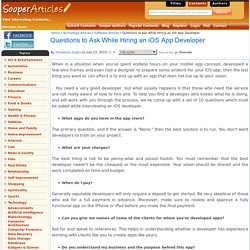 You need a very good developer, but what usually happens is that those who need the service are not really aware of how to hire one. To help you find a developer who knows what he is doing, and will work with you through the process, we've come up with a set of 10 questions which must be asked while interviewing an iOS developer. What apps do you have in the app store? The primary question, and if the answer is "None," then the best solution is to run. You don't want developers to train on your project. What are your charges? The best thing is not to be penny-wise and pound foolish. When do I pay? Generally reputable developers will only require a deposit to get started. Glimpse of hidden features of iOS 9. Apple unveiled the features of iOS 9 on 9th June 2015 at the WWDC keynote for their fans as well as developers. 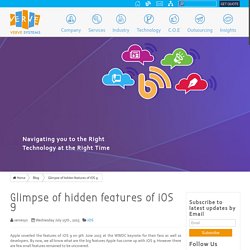 By now, we all know what are the big features Apple has come up with iOS 9. However there are few small features remained to be uncovered. Since years, iPhone users were switching manually in order to prolong their battery life. Apple has given attention to the battery issues with iOS 9. The two power mode introduced for better battery life saving mode low power mode and face down mode. Low power mode Blocks background running appsStops the Email appTurns off the animationsLimits network activity and performanceAdjusts the screen brightnessSlows down the processor Face down mode Determining face down through ambient light and proximity sensorsTurn off the screen automatically, even with the notification pop up off. ‘Internet of Things’: Enhancing Food Quality, Hygiene and Shelf Life. Are you concerned about the quality of food you have been consuming? 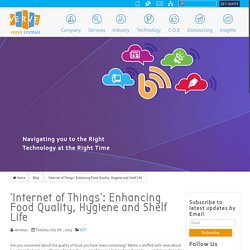 Media is stuffed with news about how toxicity has been affecting food in the course of transportation from farms to your kitchen. Reports of rampant food poisoning have added the grim quotient to this problem. ‘Internet of Things (IoT)’ is the most contemporary of online advances that has been blending cloud computing and wireless technology to make your kitchen safer. How is your food imperiled?

Why your food gets contaminated in transit and storage? The shelf life of food products is greatly affected by ambient temperature levels. A Few Thoughts On Microsoft’s Massive Writedown. This morning marked a long-awaited financial mess for Microsoft, which wrote down more than $7 billion of goodwill related to its purchase of the majority of Nokia’s hardware business. 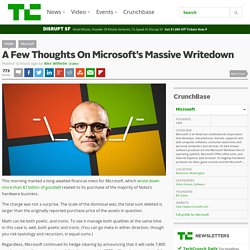 The charge was not a surprise. The scale of the dismissal was; the total sum deleted is larger than the originally reported purchase price of the assets in question. Math can be both poetic, and ironic. To see it manage both qualities at the same time in this case is, well, both poetic and ironic. (You can go meta in either direction, though you risk tautology and recursion, in equal sums.) Regardless, Microsoft continued its hedge clearing by announcing that it will cede 7,800 employees to other companies, while taking a roughly $800 million charge on top of the writedown. On a cash basis, Microsoft is in fine shape.

Microsoft has been here before with aQuantive, so I doubt that its investors are too shocked.