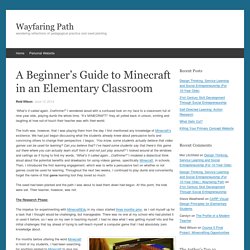 I wondered aloud with a confused look on my face to a classroom full of nine year olds, playing dumb the whole time. “It’s MINECRAFT!” They all yelled back in unison, smiling and laughing at how out-of-touch their teacher was with their world. The truth was, however, that I was playing them from the day I first mentioned any knowledge of Minecraft’s existence. We had just begun discussing what the students already knew about persuasive texts and convincing others to change their perspective. The seed had been planted and the path I was about to lead them down had begun. The Research Phase: The impetus for experimenting with MinecraftEdu in my class started three months prior, as I set myself up for a task that I thought would be challenging, but manageable.

Wayfaringpath Photography I started this research process by using my PLN to learn about how and why MinecraftEdu could be used in education. Building the World: Putting the Plan Into Action. Teachers Take Game-Based Learning to the Next Level. The days of video games being restricted to an after-school activity are quickly becoming numbered, as teachers continue to find fresh applications for game-based learning. 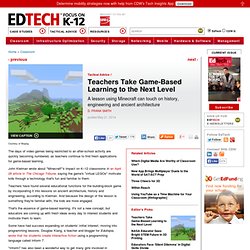 John Kielman wrote about "Minecraft"'s impact on K–12 classrooms in an April 28 article in The Chicago Tribune, saying the game's "virtual LEGOs" motivate kids through a technology that's fun and familiar to them. Teachers have found several educational functions for the building-block game by incorporating it into lessons on ancient architecture, history and engineering, according to Kielman. And because the design of the lesson is something they're familiar with, the kids are more engaged. That's the essence of game-based learning. It's not a new concept, but educators are coming up with fresh ideas every day to interest students and motivate them to learn.

Some have had success expanding on students’ initial interest, moving into programming lessons. "The classes are not about teaching programming. Using Minecraft in the Classroom - Center for Educational Improvement. By Victoria Zelvin. 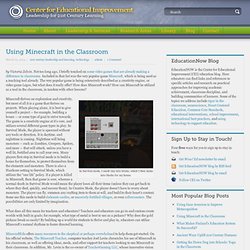 Not too long ago, I briefly touched on some video games that are already making a difference in classrooms. Included in that list was the very popular game Minecraft, which is being used as a teaching tool already. The very popular game is being extensively described as a creativity engine, or video game Legos, but what does it really offer? How does Minecraft work? How can Minecraft be utilized as a tool in the classroom, in tandem with other lessons? In Survival mode, I smelt clay into bricks, which I then make into blocks for my house. Minecraft thrives on exploration and creativity, but most of all it is a game that thrives on projects. What does all this mean for teachers and educators? MinecraftEdu offers many resources to the skeptical or perhaps overwhelmed to help them get started.

“What happens when we give students an alternate reality in which to play, experiment, create, collaborate — and yes — sometimes make a hot mess of failure?” Minecraft in the Classroom Teaches Reading and More. Last month, Scientific American declared, "... not only is Minecraft immersive and creative, but it is an excellent platform for making almost any subject area more engaging.” 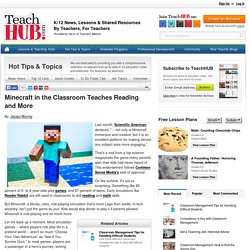 That’s a nod from a top science magazine to the game many parents wish their kids had never heard of. This endorsement follows Common Sense Media's seal of approval. On the surface, it's not so surprising. Something like 80 percent of 5- to 8-year-olds play games, and 97 percent of teens. Early simulations like Reader Rabbit are still used in classrooms to drill reading and math skills. But Minecraft, a blocky, retro, role-playing simulation that's more Lego than svelte, hi-tech wizardry, isn't just the game du jour. Use these effective classroom management tips to deal with difficult students... Being consistent is of paramount importance when implementing and executing... Teachers Transform Minecraft for Class Use. Digital Tools Teaching Strategies MinecraftEDU By Katrina Schwartz Educators have been tapping into the wildly popular online game Minecraft for its potential as a learning tool for a while now — to teach physics, math, and computer science. 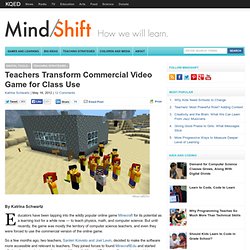 But until recently, the game was mostly the territory of computer science teachers, and even they were forced to use the commercial version of the online game. So a few months ago, two teachers, Santeri Koivisto and Joel Levin, decided to make the software more accessible and relevant to teachers. Teachers like to use Minecraft because it’s a “sandbox” game — it provides players nearly limitless freedom to build within it.