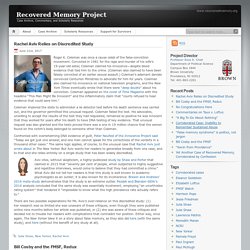 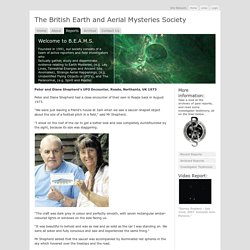 "We were just leaving a friend's house at 3am when we saw a saucer-shaped object about the size of a football pitch in a field," said Mr Shepherd. "I stood on the roof of the car to get a better look and was completely dumbfounded by the sight, because its size was staggering. "The craft was dark grey in colour and perfectly smooth, with seven rectangular amber-coloured lights or windows on the side facing us. "It was beautiful to behold and was as real and as solid as the car I was standing on. Study finds one-third of people prone to 'remembering' false events. Posted A recent study has found about one-third of people can, if prompted, 'remember' or at least believe events that never actually happened. 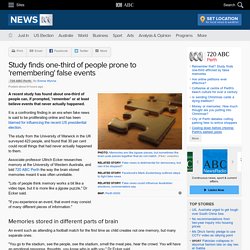 It is a confronting finding in an era when fake news is said to be proliferating online and has been blamed for influencing the recent US presidential election. The study from the University of Warwick in the UK surveyed 423 people, and found that 30 per cent could recall things that had never actually happened to them. Associate professor Ullrich Ecker researches memory at the University of Western Australia, and told 720 ABC Perth the way the brain stored memories meant it was often unreliable. Cognitive bias cheat sheet. Great, how am I supposed to remember all of this? 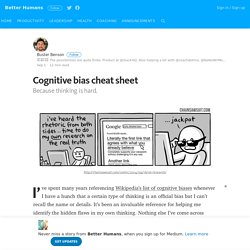 You don’t have to. But you can start by remembering these four giant problems our brains have evolved to deal with over the last few million years (and maybe bookmark this page if you want to occasionally reference it for the exact bias you’re looking for): Information overload sucks, so we aggressively filter. 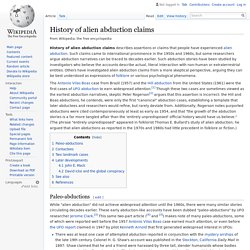 Such claims came to international prominence in the 1950s and 1960s, but some researchers argue abduction narratives can be traced to decades earlier. Such abduction stories have been studied by investigators who believe the accounts describe actual, literal interaction with non-human or extraterrestrial entities. Others have investigated alien abduction claims from a more skeptical perspective, arguing they can be best understood as expressions of folklore or various psychological phenomena. Paleo-abductions[edit] While "alien abduction" did not achieve widespread attention until the 1960s, there were many similar stories circulating decades earlier. There was at least one case of attempted abduction reported in conjunction with the mystery airships of the late 19th century. 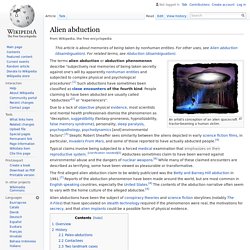 The terms alien abduction or abduction phenomenon describe "subjectively real memories of being taken secretly against one's will by apparently nonhuman entities and subjected to complex physical and psychological procedures".[1] Such abductions have sometimes been classified as close encounters of the fourth kind. People claiming to have been abducted are usually called "abductees"[2] or "experiencers". Typical claims involve being subjected to a forced medical examination that emphasizes on their reproductive system. [clarification needed][5] Abductees sometimes claim to have been warned against environmental abuse and the dangers of nuclear weapons.[6] While many of these claimed encounters are described as terrifying, some have been viewed as pleasurable or transformative. Overview[edit] Mainstream scientists reject claims that the phenomenon literally occurs as reported. History[edit] UFO Report: Peter and Diane Shepherd's UFO Encounter, Roade, Northants, UK - 1973.

Making a Memory of Murder. The world recently lost it’s sh*t over a Netflix documentary called “Making a Murderer”. 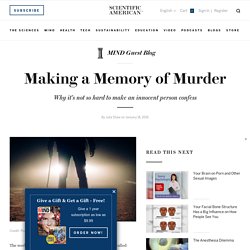 The show begins with footage from a real criminal case, where a man named Steven Avery is released after spending 18 years in prison for a sex crime which he did not commit. Shortly after his release, Steven Avery finds himself in a new turmoil of accusations that implicate him in the murder of photographer Teresa Halbach. One of the main pieces of evidence in the murder case is a confession by his 16-year-old nephew Brendan Dassey. Brendan Dassey claimed that he had helped his uncle rape and kill the victim. The account was extremely detailed, saying where and how Teresa Halbach was killed, and how the body was disposed of. When his mom asked him why he would falsely confess to such a heinous crime, the following conversation was recorded (conversation is shortened, see original here); Brendan: Well, you know I'm telling you the truth that it's not true.

The Deadly Data Science Sin of Confirmation Bias. Confirmation bias occurs when people actively search for and favor information or evidence that confirms their preconceptions or hypotheses while ignoring or slighting adverse or mitigating evidence. 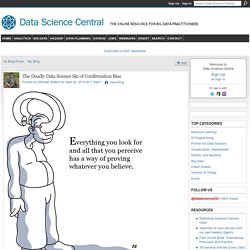 It is a type of cognitive bias (pattern of deviation in judgment that occurs in particular situations - leading to perceptual distortion, inaccurate judgment, or illogical interpretation) and represents an error of inductive inference toward confirmation of the hypothesis under study. This site NOT affiliated with "Katharina Wilson" or "Kay Wilson" or any "variations" of these names. 1997-Alien Abduction in Wales. Summary: A well researched case of alien abduction comes from Wales, and well-known researcher Margaret Fry. 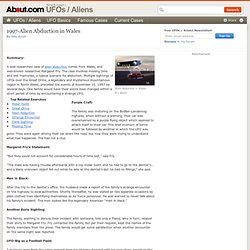 The case involves missing time and lost memories, a typical scenario for abduction. Multiple sightings of UFOs over the Great Orme, a legendary and mysterious mountainous region in North Wales, preceded the events of November 10, 1997 by several days. Inside the Alien-Abduction Support-Group Annual Meeting in Newport, R.I. They flew in with a man named Budd Hopkins. 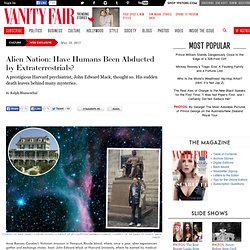 It was January 10, 1990, Mack recalled, “one of those dates you remember that mark a time when everything in your life changes.” A woman he had met at the Grofs’ introduced him to Hopkins, a nationally known New York Abstract Expressionist and intimate of Willem DeKooning, Jackson Pollock, Mark Rothko, Franz Kline, and Robert Motherwell, whose works hung with his in the permanent collections of the Museum of Modern Art, the Guggenheim, and the Whitney. According to Hopkins, he had spotted a U.F.O. on Cape Cod in 1964, and he went on to investigate the case of a badly shaken neighbor who had reported seeing a spaceship with nine or ten small beings land in a park near Fort Lee, New Jersey. KathleenMardenUFO. I earned a B.A. degree in social work from the University of New Hampshire in 1971, and participated in graduate studies in education at the University of Cincinnati and U.N.H., while working as a teacher and education services coordinator.

My primary academic interest has been in social research and psychology and this has continued to the present time. I left my job in 1990 to pursue a career as a UFO investigator, researcher and writer. As the niece of Betty and Barney Hill and witness to the primary evidence and aftermath of their alien abduction in 1961, I had been aware of the UFO phenomenon for more than fifty years. My book (with nuclear physicist/scientific ufologist Stanton T. Argument. Links to a list of papers on the trauma-memory argument. John F. Kihlstrom Yale University An edited version of this article appeared in The Recovered Memory/False Memory Debate, ed. by K.

Pezdek & W.P. Why would adult memory researchers contradict the clinical findings and some research findings that adult women who were sexually abused as children may have memory problems and often remember the abuse during therapy? Corroboration of Child Abuse Memories. The December 1996 issue of the journal Dissociation (which was actually published in March of 1998) contains three articles exploring the parameters of recovered memories.

An earlier feature summarized a Dutch study of recovered memory in abuse survivors. In the same issue of Dissociation Elizabeth Bowman, M.D. has written an excellent two-part article summarizing the current state of the research literature concerning delayed memories of child abuse. Bowman notes that cognitive psychologists who have not studied traumatized individuals have contributed much of the research literature on memory. Her contribution is to pull together the well-designed studies which have used trauma survivors in order to study traumatic memory. Consider This, Skeptics of Recovered Memory - Ethics & Behavior - Volume 8, Issue 2. Some self-proclaimed skeptics of recovered memory claim that traumatic childhood events simply cannot be forgotten at the time only to be remembered later in life.

Repressed memory. Repressed memories are hypothesized memories having been unconsciously blocked, due to the memory being associated with a high level of stress or trauma. [citation needed] The theory postulates that even though the individual cannot recall the memory, it may still be affecting them consciously.[1] Hypnosis in Interrogation. UFOs in fiction. Books[edit] Top 75 Films about Aliens - a list by knemesis16. The best and worst alien abduction movies. Alien abduction. The Abduction Conundrum. John Kuhles interviews Abductee & Author Jim Sparks about Grays & Reptilian Humanoids on UntoldMysteries.eu Radio – if mainstream can not handle it, we will. The Abduction Conundrum, page 2. But what about psychological explanations? I've saved these for last, because I take them more seriously. In fact, I demand them. Re: Abduction - Media influence. Phantoms and Monsters: Paranormal Activity, Bigfoot, Mothman, UFOs and Other Unexplained Phenomena.