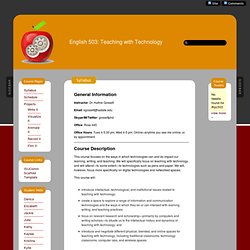 Kathie Gossett Email: kgossett@iastate.edu Skype/IM/Twitter: gossettphd Office: Ross 445. 10 Literary Devices, And Where You Can Find Them in Science Fiction. Anthony Burgess Explains the Meaning of ‘A Clockwork Orange’ in This Week’s ‘New Yorker’ Famous Novelists on Symbolism in Their Work and Whether It Was Intentional. It was 1963, and 16-year-old Bruce McAllister was sick of symbol-hunting in English class. 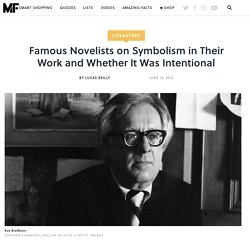 Rather than quarrel with his teacher, he went straight to the source: McAllister mailed a crude, four-question survey to 150 novelists, asking if they intentionally planted symbolism in their work. Seventy-five authors responded. Here’s what 12 of them had to say. (Copies of the survey responses can be found at the Paris Review.) McAllister's Letter “My definition of symbolism as used in this questionnaire is represented by this example: In The Scarlet Letter there are four major characters.

The Story of Symbols. We use them every day – but what are the mysterious origins of these symbols we take for granted? 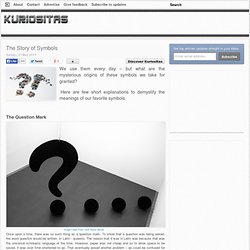 Here are few short explanations to demystify the meanings of our favorite symbols.The Question Mark Once upon a time, there was no such thing as a question mark. Books With 140 Characters. I’d cite the hoary adage about herding cats, but even cats speak the same language. 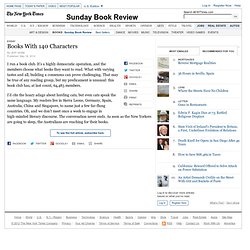 My readers live in Sierra Leone, Germany, Spain, Australia, China and Singapore, to name just a few far-flung countries. Oh, and we don’t meet once a week to engage in high-minded literary discourse. The conversation never ends. As soon as the New Yorkers are going to sleep, the Australians are reaching for their books. All of this is courtesy of 1book140, a Twitter book club I started last May in conjunction with The Atlantic magazine. Why I Write: George Orwell's Four Motives for Creation. By Maria Popova “All writers are vain, selfish, and lazy, and at the very bottom of their motives there lies a mystery.” 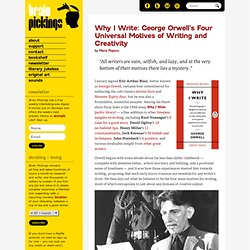 Literary legend Eric Arthur Blair, better known as George Orwell, remains best remembered for authoring the cult-classics Animal Farm and Nineteen Eighty-Four, but he was also a formidable, masterful essayist. Among his finest short-form feats is the 1946 essay Why I Write (public library) — a fine addition to other timeless insights on writing, including Kurt Vonnegut’s 8 rules for a great story, David Ogilvy’s 10 no-bullshit tips, Henry Miller’s 11 commandments, Jack Kerouac’s 30 beliefs and techniques, John Steinbeck’s 6 pointers, and various invaluable insight from other great writers. I give all this background information because I do not think one can assess a writer’s motives without knowing something of his early development. 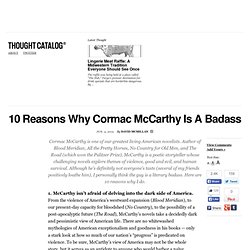 Author of Blood Meridian, All the Pretty Horses, No Country for Old Men, and The Road (which won the Pulitzer Prize), McCarthy is a poetic storyteller whose challenging novels explore themes of violence, good and evil, and human survival. Although he’s definitely not everyone’s taste (several of my friends positively loathe him), I personally think the guy is a literary badass. Here are 10 reasons why I do. 1. McCarthy isn’t afraid of delving into the dark side of America. 2. The dead lay awash in the shallows like the victims of some disaster at sea and they were strewn along the salt foreshore in a havoc of blood and entrails. 3. 4. 5. 6. 7. You know what the date on this coin is?

But McCarthy’s supreme achievement in this regard is Judge Holden from Blood Meridian, whose monologue on war might be one of the most terrifying—and terrifyingly logical—meditations about the will-to-power I’ve ever read: 8. 9. 10. The Ultimate Summer Reading Flowchart. When Respected Authors, from Goethe to Kerouac, Try Their Hand at Painting. 'The Graphic Canon': When Great Literature Collides With Cartoons. Sartre, Camus and a woman called Wanda. In the middle of the Second World War, Sartre and Camus had their own private little war going. 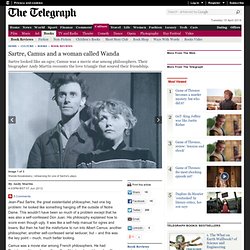 But Sartre’s relationship with Wanda went right back to before the war, pre-Camus. For years, Sartre had been obsessing over Wanda’s older sister, Olga Kosakiewicz, one of Simone de Beauvoir’s students. De Beauvoir seduced Olga to start with, then tried to pass her on to Sartre. But Olga wasn’t really up for it. De Beauvoir was a lot better looking than Sartre, and taller, too. On the other hand, she didn’t keep on running. He told Wanda that he loved her. Back in occupied Paris, Sartre also gave her a small part in his play The Flies (1943). Camus was always the “outsider”, even before he wrote the great novel.

What “Top Gun” has in common with “The Odyssey” IN THE SUMMER of 1986, on the verge of fourteen, I accompanied my friend and her family to the Outer Banks of North Carolina for a two-week beach vacation. 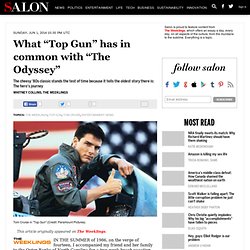 The small cottage we stayed in was without a television, and after just two initial days of sunshine, a unrelenting rain came in. At first, we busied ourselves with chocolate milkshakes and gossip, several successful trips to the hermit crab store, and stuffing our first bikini tops with potholders. But eventually, her exasperated mother dropped us off at a local movie theater, where, unsure of what to see, we ordered two large buckets of popcorn, bought tickets to a movie called Top Gun, and settled in for what we were sure was a “guys’ movie.”