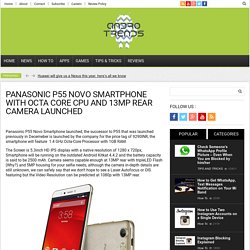 The Screen is 5.3inch HD IPS display with a native resolution of 1280 x 720px, Smartphone will be running on the outdated Android Kitkat 4.4.2 and the battery capacity is said to be 2500 mAh. Camera seems capable enough at 13MP rear with tripleLED Flash (Why?) PC News : Windows Still going strong with 90 percent share in Personal Computing. Windows is undoubtedly the king of Personal Computing, with recent statistics published it is now running on more than 90 percent of desktops and laptops all over the world, with 7.54 being the second competition as MAC OS. 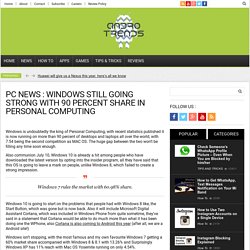 The huge gap between the two won’t be filling any time soon enough. Also communion July 10, Windows 10 is already a hit among people who have downloaded the latest version by opting into the insider program, all they have said that this OS is going to leave a mark on people, unlike Windows 8, which failed to create a strong impression. Windows 7 rules the market with 60.98% share. Windows 10 is going to start on the problems that people had with Windows 8 like, the Start Button, which was gone but is now back. Windows isn’t stopping, with the most famous and my own favourite Windows 7 getting a 60% market share accompanied with Windows 8 & 8.1 with 13.26% and Surprisingly Windows XP has 11% reach with Mac OS Yosemite running on only 4.54%. Smartphone with 10,000 mAh Battery? Here it is. 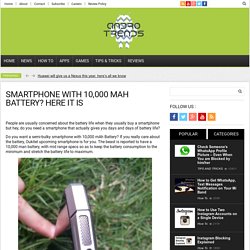 Do you want a semi-bulky smartphone with 10,000 mAh Battery? All we need to know about OnePlus Two : Rumour Roundup. OnePlus One was a big hit, and now the company is trying to recreate the success by putting in a successor of the device, called the OnePlus Two. 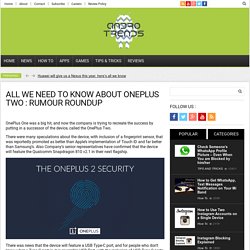 There were many speculations about the device, with inclusion of a fingerprint sensor, that was reportedly promoted as better than Apple’s implementation of Touch ID and far better than Samsung’s. Also Company’s senior representatives have confirmed that the device will feature the Qualcomm Snapdragon 810 v2.1 in their next flagship. There was news that the device will feature a USB Type-C port, and for people who don’t know what a Type-C port is, it is reversible USB Port, with the inclusion of USB Type-C ports you won’t have to to correctly insert the cable as it won’t matter from which side you insert it. 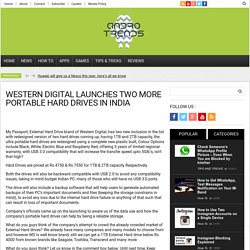 Hard Drives are priced at Rs 4750 & Rs 7550 for 1TB & 2TB capacity Respectively. Both the drives will also be backward compatible with USB 2.0 to avoid any compatibility issues, taking in mind budget Indian PC- many of those who still have no USB 3.0 ports. Xiaomi Redmi 2 all set to receive a Rs 1000 price cut tomorrow. Xiaomi Redmi 2, is all set to receive a price cut tomorrow of Rs 1000 making the device final price to be 5999, the device was launched previously this year and now the company is going to slash the price a little bit to gain more consumer attraction. 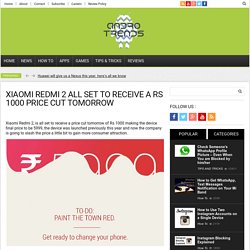 Intel Compute Stick Launched for 9,999 with Windows 8.1 on Flipkart. Finally the affordable Intel Compute stick is being launched in the Indian Market with Windows 8.1 pre installed and 2GB RAM, the device will act on a Device supporting HDMI to use as a fully functional Desktop PC, with the inclusion of Windows 8.1 the costumer will also have the option of using a range of PC softwares such as Photoshop, Windows Media Player and Games that require less resources. 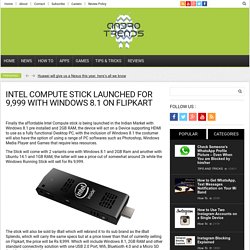 How To know Who Unfriend You On Facebook. OnePlus Two: Official Blogpost confirms 4GB RAM (LPDDR4) Admit it, OnePlus two is the most talked about smartphone right now, with news and rumours of all kinds coming in the smartphone’s popularity is increasing everyday. 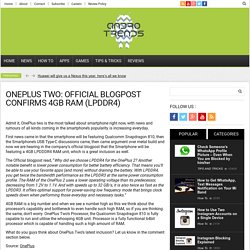 Star Wars : Uprising gameplay hits the web, coming to Android and iOS this fall. Game Developer Kabam has published a Gameplay video of Stars Wars : Uprising on Youtube which showcases the games style. 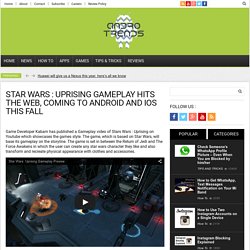 The game, which is based on Star Wars, will base its gameplay on the storyline. The game is set in between the Return of Jedi and The Force Awakens in which the user can create any star wars character they like and also transform and recreate physical appearance with clothes and accessories. Action Launcher updated to v3.5 with fixes and 'Quickbar' Action Launcher one of the best Third party android launcher replacement available on the Play store right now is receiving an update that will fix bugs, improve performance and add Quickbar. 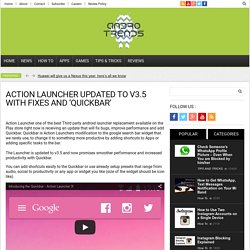 Quickbar is Action Launchers modification to the google search bar widget that we rarely use, to change it to something more productive by adding shortcuts to Apps or adding specific tasks to the bar. The Launcher is updated to v3.5 and now promises smoother performance and increased productivity with Quickbar. You can add shortcuts easily to the Quickbar or use already setup presets that range from audio, social to productivity or any app or widget you like (size of the widget should be icon like). What is Google’s Project Fi? Should we be excited. What is Google’s Project Fi? To make things very clear, Project Fi is Google’s ambitious try to enter the wireless service network. What Google is basically trying to do is to act like a middlemen between the user and the carriers, to act as a MVNO (Mobile Virtual Network Operator). In which google will pay the licensing thing to access and use wireless infrastructure of many carriers at once, to provide you with the best network and speed that is possible.

Currently Google has partnered with T-Mobile, Sprint and licensed their infrastructure for its Project Fi. Star Trek Communicator is real, couples up as a Bluetooth Handset and Speaker. All who love Star Trek remember the Communicator, the device that was used by the Captain Krik and his crew a hundred of times to create a fictional resemblance of a mobile phone? The thing is now real and functional as a Bluetooth handset as well as a Bluetooth Speaker.

Unlike many other replicas that are just show-pieces, this one will make you nostalgic over one of your favourite movie series as well as work as a device that you answer your calls and listen your music on. The device will have a rechargeable battery, which you can recharge to juice it up for another call or couple of hours of music. Samsung Galaxy J2 in works, noticeable upgrades over Galaxy J1. Looks like folks over at Samsung are trying to push in an upgrade to the ultra-affordable Galaxy J1, the device that was aimed at emerging markets like India, Latin America and some parts of Asia. The device featured a 4.3 inch display, 512MB RAM and 1850 mAh battery. Its direct successor, the Galaxy J2 will feature more attractive specifications with a 4.5 inch TFT LCD display with a 800x480p resolution, Samsung’s own Exynos 3475 1.2 GHz quad-core processor, 1.5GB RAM, 8GB Internal Memory with expandability with a MicroSD card.

Device will feature a 5MP rear camera with flash and a 2MP Camera for selfie needs, powered by a 2000 mAh battery, running Android 5.1.1 . Upgrades are usually priced similarly to the predecessors so we think that the price of J2 would be similar or close to that of J1 and J1’s price would be slashed in sometime to make way for the successor. Are you impressed by the specs? Leaked: Ultra-thin Samsung Galaxy A8 with FingerPrint Sensor, 2GB RAM.

Shadowgun: Deadzone, Popular Android Multiplayer Opens Up for Mods. Madfinger games, the developer company behind the blockbuster hit Dead Trigger and Dead Trigger Two is now opening its Multiplayer Android Game, Shadowgun deadzone to Game enthusiast to design and mod the game to their heart’s content. All Nexus 6 Devices running Project Fi, get Android 5.1.1 ‘over the next few days’ Sony device will malfunction if you enable My Xperia App under Settings. Sony has released a statement that tells us that if you have a Unlocked Bootloader and you enable the My Xperia App, your device will malfunction. The malfunction can cause considerable downfall in Camera quality, Screen Quality and also Audio Quality.

Sony device will malfunction if you enable My Xperia App under Settings. Google Glasses ‘Enterprise Edition’ : All We know so far. Google and Blackberry are working on Android at Work. Oneplus Two will feature a huge 3300mAh Battery. Note 5 launch in mid-august, to avoid overlap with iPhone Launch. Video of Android 1.6 running on Calculator will surprise you. Google’s Gmail Spam filter will use Machine Learning. Asus Zenfone 2 running Windows 7 shows up online. Andro Trends - What's Andro Trending today ?