It’s Time to Realize that Putin Is at War With America. This article first appeared on the Just Security site. 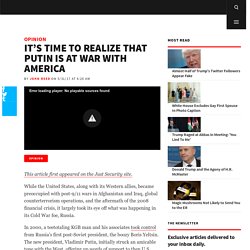 While the United States, along with its Western allies, became preoccupied with post-9/11 wars in Afghanistan and Iraq, global counterterrorism operations, and the aftermath of the 2008 financial crisis, it largely took its eye off what was happening in its Cold War foe, Russia. In 2000, a teetotaling KGB man and his associates took control from Russia’s first post-Soviet president, the boozy Boris Yeltsin.

The new president, Vladimir Putin, initially struck an amicable tone with the West, offering up words of support to then U.S. president George W. Bush after 9/11. Subscribe to Newsweek from $1 per week Despite this, Putin and his colleagues, many of whom came from the Soviet security services, were set on rebuilding Russia as a great power in accord with their own vision. Vladimir Putin watches exercises of Russia's Northern Fleet in the Barentsevo Sea, 06 April 2000. 8 Ways to Declutter Your Life. If you have ever taken the time to realize how cluttered your life is with work, school, finances and entertainment that doesn’t leave much time for you to think and organize yourself. 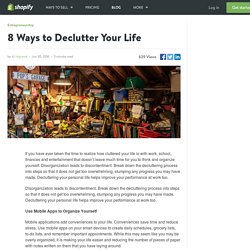 Disorganization leads to discontentment. Break down the decluttering process into steps so that it does not get too overwhelming, stumping any progress you may have made. Decluttering your personal life helps improve your performance at work too. Disorganization leads to discontentment. Declassified CIA Manual Shows How US Uses Bureaucracy to Destabilize Governments. Submitted by Jake Anderson via TheAntiMedia.org, When most people think of CIA sabotage, they think of coups, assassinations, proxy wars, armed rebel groups, and even false flags - not strategic stupidity and purposeful bureaucratic ineptitude. 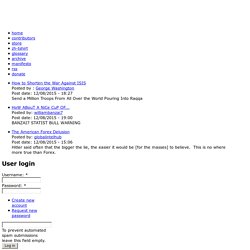 However, according to a declassified document from 1944, the Office of Strategic Services (OSS), which later became the CIA, used and trained a curious breed of “citizen-saboteurs” in occupied nations like Norway and France. The World War II-era document, called Simple Sabotage Field Manual, outlines ways in which operatives can disrupt and demoralize enemy administrators and police forces. The Russian Question—–How The War Party Has Demonized Putin & Co. It’s 2018, and President Hillary Clinton has announced that the Russians have violated her “no fly zone” over Syria. 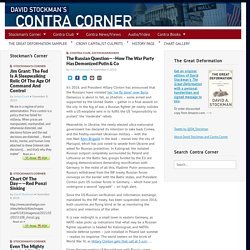 Competing Worldviews. Ivan Ilyin and the Ideology of Putin's Rule. In the last days of April, Russian television aired a 150-minute documentary about Vladimir Putin’s decade and a half as the leader of Russia. 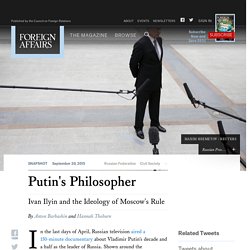 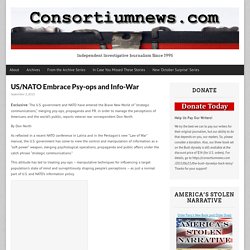 By Don North. The World Hates Russia. Russia Hates It Back. Russian President Vladimir Putin's propaganda targeted at audiences outside Russia doesn't work, but neither will any Western counter-efforts directed at Russians. 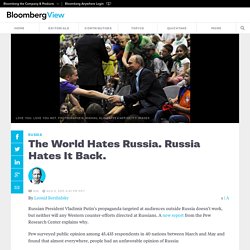 A new report from the Pew Research Center explains why. Pew surveyed public opinion among 45,435 respondents in 40 nations between March and May and found that almost everywhere, people had an unfavorable opinion of Russia: Europeans, whom the Kremlin would like to consider deluded U.S. followers, are often even more negative about Russia than Americans are -- and that's not just Poles, more exposed than others to the conflict in Ukraine, but also previously Russia-friendly Germans and French. Russia has few friends in the Middle East and Latin America. More Turks dislike it than view it favorably despite President Recep Tayyip Erdogan's warm relationship with Putin, and Venezuelans are no Russophiles despite their government's anti-American consensus with Moscow. In February, U.S. The Russia Sanctions Have Failed—Here's What to Do Next.

Whether or not the West’s sanctions against Russia have been a success depends to a considerable degree on what one thinks the sanctions were meant to achieve and how quickly. 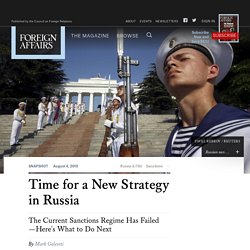 More than a year on, Crimea remains occupied, Russia continues to interfere in Ukraine, and the longer-term goal of forcing the Kremlin to accept and abide by the accepted norms of international behavior remains out of reach. The Russian economy is suffering, but more because of low oil prices and structural economic weaknesses than the impact of sanctions, and Russian President Vladimir Putin appears to have concluded that the costs are bearable. The Russia Sanctions Have Failed—Here's What to Do Next. «Гонконгские» технологии на службе у ленивых киевских «креативщиков» Internet Trolls: Propaganda's Final Frontier - Geopoliticalmonitor.com. Introduction If we are now in fact living in a global village, it’s one where the inhabitants agree on just one thing: capitalism is the ideal model for generating economic growth. 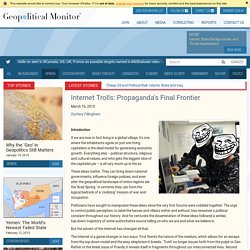 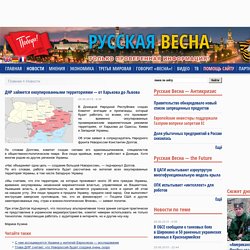 It calls for “promotion of EU policies” in former Soviet states, support for “independent media”, and “increased public awareness of disinformation activities by external actors”. It says a new EU foreign service cell, called East StratComTeam, which is to be up-and-running by September, will shepherd activity. On the regulation front, the EU foreign service notes that “media policy remains primarily a national competence”. Filmmaker: WW3 will Begin with US Bombing Russian TV Networks. Award-winning Serbian director and musician Emir Kusturica believes that when Washington eventually starts World War III, RT will become one of its first and primary targets, being an extremely powerful weapon challenging US state propaganda.

The Odd American View of Negotiation. One of the unfortunate corollaries of American exceptionalism is a warped and highly asymmetric conception of negotiation. This conception can become a major impediment to the effective exercise of U.S. diplomacy. Although the attitudes that are part of this view of negotiation are not altogether unique to the United States, they are especially associated with American exceptionalist thinking about the supposed intrinsic superiority of U.S. positions and about how the sole superpower ought always to get its way. The corollary about negotiation is, stated in its simplest and bluntest terms, that negotiation is an encounter between diplomats in which the United States makes its demands—sometimes expressed as “red lines”—and the other side accepts those demands, with the task of the diplomats being to work out the details of implementation. Domestic American politics have followed a similar trajectory.

The Odd American View of Negotiation. Russian propaganda in Ukraine: Long live Ruthenia. The Top Secret (Fake) Memo to Putin on How to Counter NATO’s Latest Move. Memo: Our Winning Strategy in EuropeFrom: Russian Strategic Planning CellTo: President Vladimir Putin. Oil and Hubris Are Eroding Putin’s Early Economic Gains. Russia’s economy continues to face serious structural problems dating from the Soviet era, even as the country’s currency recovers from the plunge it took last winter. Back then the geopolitical fallout from Russian activities in Ukraine, an unexpected plunge in oil prices, and sharp capital outflows from firms worried about capital controls led many to predict a collapse in the value of the ruble.

However the onset of spring together with the latest ceasefire in Ukraine more-or-less holding has allowed a fragile sense of calm to return regarding Russia’s economic prospects. British spies betrayed to Russians and Chinese. Edward Snowden, inset right, has been in Moscow under Vladimir Putin’s protection since 2013 (Walter Bibikow) RUSSIA and China have cracked the top-secret cache of files stolen by the fugitive US whistleblower Edward Snowden, forcing MI6 to pull agents out of live operations in hostile countries, according to senior officials in Downing Street, the Home Office and the security services. Western intelligence agencies say they have been forced into the rescue operations after Moscow gained access to more than 1m classified files held by the former American security contractor, who fled to seek protection from Vladimir Putin, the Russian president, after mounting one of the largest leaks in US history.

US Marine CorpsMARSOC Marines on a night training mission. Донбасс: битва разведок. [18+] Ukrainian Nazis execute ethnic Russians including pregnant woman. «Распятый солдат» и «Младенец с отрезанными руками» The Original Chechnya Bombers - The CIA, The Saudis And Bin Laden. Operation Moolah - The Plot to Buy a MIG. Even More Admitted False Flag Terror Incidents Come to Light. Mission Unstoppable: Why Is the CIA Running America’s Foreign Policy? Everyone Agrees that Ukraine Sniper Attacks Were a False Flag ... They Only Argue About WHO Is the Culprit Washington's Blog. The Destabilization of Ukraine: A Classic “False Flag” Operation.