So I Married An Axe Murderer trailer. Mvp. M.V.P stand for MOST VALUBLE PERSONEL OR MOST VALUBLE PLAYER that practically explains it go head envy me im raps M.V.P Most Valuable Player in any type. 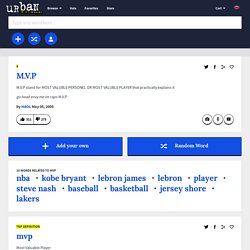 "Go Ahead and Envy Me, I'm Rap's MVP, and I ain't going nowhere so You Can Get to Know Me" The Game. The Documentary. Hate It or Love It (Feat. 50 Cent) The Most Valuable Player. Unfortunately, this term was hijacked by retards who watch Jersey Shore, who now think it stands for Mike Vinny Paul or some shit. Me: He was totally MVP during that game Friend: Mike, Vinny, and Paul? Me: *facepalm. The Most Valuable Player Kevin Garnet was the MVP A awesome person that you this is outstanding and did something worth being around. Man you are the real MVP, thanks for being here for me. by Olaf December 21, 2014 Montel Vontavious Porter. MVP wouldn't even get out of his pod in the Elimination Chamber match of 2008. You suck. 10-things-parents-should-never-tell-their-daughters. Remember that upsetting moment in your twenties, when you realized that everything does come down to Mom, Dad and Me? 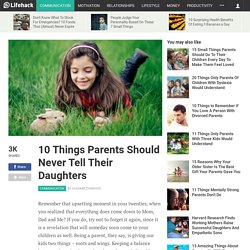 If you do, try not to forget it again, since it is a revelation that will someday soon come to your children as well. Being a parent, they say, is giving our kids two things – roots and wings. Keeping a balance between those is what makes the task so unbelievably hard. Misconceptions and unreasonable beliefs we endow our children with are rusty tools, and as all that’s covertly damaging, they tend to stay. It’s an inheritance they will pass on to their children, creating a vicious circle that never ends. 1. Молитва "Отче наш" - поет Хор Турецкого. The Bucket List sur Twitter : "I would love to travel to Singapore□... The Bucket List sur Twitter : "I want to wake up to this □□□... Beef Stew with Butternut Squash. Beef and Butternut Squash Stew Recipe. Recipe: Beef Stew With Potatoes, Carrots and Butternut Squash.

Yield: 10 to 12 servings Cook's notes: Many markets sell butternut squash that is peeled and cubed. 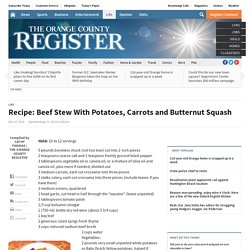 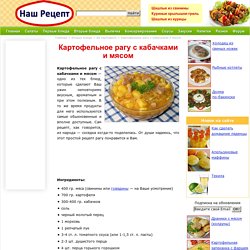 В то же время продукты для него используются самые обыкновенные и вполне доступные. LSS. LSS stands for Last Song Syndrome - when you just can't seem to stop singing a particular song that got stuck in your head, no matter how hard you try to sing a new one, you'll just end up singing the same lines from that song. iPod: *singing* We ride... 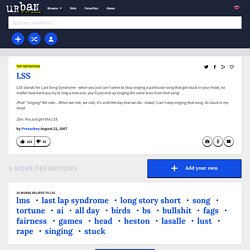 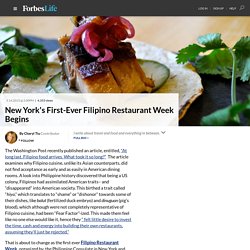 What took it so long?” The article examines why Filipino cuisine, unlike its Asian counterparts, did not find acceptance as early and as easily in American dining rooms. A look into Philippine history discovered that being a US colony, Filipinos had assimilated American traits– and “disappeared” into American society. This birthed a trait called “hiya,” which translates to “shame” or “dishonor” towards some of their dishes, like balut (fertilized duck embryo) and dinuguan (pig’s blood), which although were not completely representative of Filipino cuisine, had been “Fear Factor”-ized. This made them feel like no one else would like it, hence they “ felt little desire to invest the time, cash and energy into building their own restaurants, assuming they’ll just be rejected.” 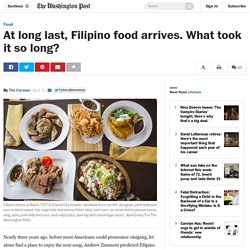 (April Greer/For The Washington Post) Nearly three years ago, before most Americans could pronounce sinigang, let alone find a place to enjoy the sour soup, Andrew Zimmern predicted Filipino cuisine would soon become the darling of diners who collect restaurant experiences like seashells on the beach. If you survey the dining landscape today, you might wonder whether the “Bizarre Foods” host moonlights as a soothsayer. Zen & Tao sur Twitter : ""A beautiful woman who is pleasing to men is good only for frightening fish when she falls into the water." ~Zen Proverb #quotes" Mark Ronson ft. Bruno Mars - "Uptown Funk" PARODY.

You can connect your Android phone to Google, which lets you send information from your computer to your phone. 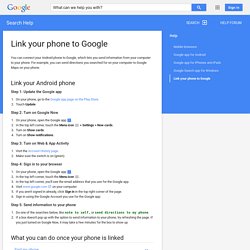 Step 5: Send information to your phone Do one of the searches below, like note to self, or send directions to my phone. Phil. Bantay sur Twitter : "“Our work is the presentation of our capabilities.”"... Daily Zen sur Twitter : "(sometimes)... Zen & Tao sur Twitter : ""Observe what is with undivided attention." ~Bruce Lee"... 10 of the Most Expensive Apartments in the World. Everyone wants a home that they can be proud of, but for some people, that dream comes with flashing way more cash than others. 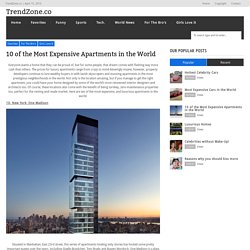 The prices for luxury apartments range from crazy to mind-blowingly insane, however, property developers continue to lure wealthy buyers in with lavish skyscrapers and stunning apartments in the most prestigious neighborhoods in the world. Not only is the location amazing, but if you manage to get the right apartment, you could have your home designed by some of the world’s most renowned interior designers and architects too. Of course, these locations also come with the benefit of being turnkey, zero-maintenance properties too, perfect for the renting and resale market.

Here are ten of the most expensive, and luxurious apartments in the world. 10. Situated in Manhattan, East 23rd street, this series of apartments totaling sixty stories has hosted some pretty important guests over the years, including Giselle Bundchen, Tom Brady and Rupert Murdoch. Typical Girl sur Twitter : "Life goal: own a tropical beach house□☀️... Katy Perry - This Is How We Do (Official) Typical Girl sur Twitter : "Date a boy who opens doors for you and smacks your ass as you walk through"...

Financial Times sur Twitter : "Now we want nuclear architecture to be anonymous. But it wasn’t always this way. Zen and Tao sur Twitter : ""Rewards and punishment is the lowest form of education." ~Chuang Tzu #tao"... Eminem - The Monster (Explicit) ft. Rihanna. Zen Moments sur Twitter : "It takes two to get one in trouble. ~ Mae West... Daily Zen on Twitter: "“The primary cause of unhappiness is never the situation but your thoughts about it.” — Eckhart Tolle" Reminders. Beautiful Pictures sur Twitter : "Chicago from the water. BBLT Sandwich - BigOven 152390. Burrito Bowls - BigOven 1138328. Skip Chipotle and try these burrito bowls right at home. 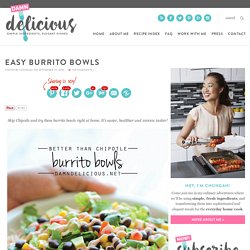 It’s easier, healthier and 10000x tastier! I finally made a burrito bowl at home. Well, I guess it’s more of a burrito plate. But still. Burrito bowl, burrito plate – I’m in love. I even received Butters’ approval here as he’s trying to jump onto the table with his very, very short legs. No, but really, with fresh veggies and just 10 min prep with a creamy chipotle drizzle, what’s not to love? Plus, this is completely customizable to add in your favorite proteins. And if you really want to go that extra step and make these even healthier, you can use quinoa in place of the rice. You’ll get that extra kick of protein, and be full for hours on end! Skip Chipotle and try these burrito bowls right at home.

Ingredients For the chipotle cream sauce 1 cup sour cream 1 tablespoon chipotle paste* 1 clove garlic, pressed Juice of 1 lime 1/4 teaspoon salt, or more, to taste Instructions Notes. Steak with Spinach Couscous - BigOven 1138475. Sauteed Chicken Breast in White Wine - BigOven 161519. Asparagus Chicken - BigOven 218385. Art Pics Channel sur Twitter : "Would you like us to tweet photographs like this? RT if yes, Fav if No... The 7 Habits of Truly Genuine People. Russian Roulette. Rihanna - Russian Roulette. Что надо еще добавить в коллекции. Should the man always pick up the check? Dear Moneyologist, I recently went on about six dates with a woman who I met online. I liked her and we seemed to have a lot in common. Every Saturday we met — and I paid. After our first date, she also picked the restaurants.

She chose very swanky places like Nobu, Spago’s and The Ivy, all places I’d always wanted to go to but couldn’t really afford on my salary. This happened again and again, and I became increasingly annoyed with myself as much as with her. Peter in Los Angeles Dear Peter, After 50 years of feminism, the answer should be easy. If it’s a first date, the person who chooses the restaurant pays; often, that’s the man. 15 Motivational Quotes for Entrepreneurs. Have you ever read something that made you want to get up and do something productive? It’s usually followed by thoughts of all the ways you are going to accomplish your goals and improve as a person but then those thoughts usually seem to die down after a day or two.

Entrepreneurs and Startup CEOs don’t have this luxury of being able to let the motivation behind their vision or dreams just die down. About 3 out of 4 startups fail and every day in the life of an entrepreneur is a roller coaster of emotions with top-of-the-world highs and rock-bottom lows. Entrepreneurs need to be persistent, focused and able to never lose sight of their original vision. An excellent way to help entrepreneurs maintain their focus is to have a quote or saying that can trigger them and be the fuel that pushes them to carry on. 1. 2. One of the first steps that you should take if you’re an entrepreneur, is to find a partner that you can trust. Screenshot20131129191206.