I am a Cricket Blogger and Story Teller at

England Vs Pakistan 3rd Test Match Prediction. Posted on - August 21, 2020 After the heavy rain affected the 2nd Test match between Pakistan and England, which concluded with a draw, both sides will lock their horns on the last time in the 3rd Test match. 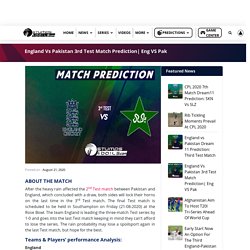 The final Test match is scheduled to be held in Southampton on Friday (21-08-2020) at the Rose Bowl. The team England is leading the three-match Test series by 1-0 and goes into the last Test match keeping in mind they can’t afford to lose the series. The rain probability may lose a spoilsport again in the last Test match, but hope for the best. Teams & Players’ performance Analysis: England It is good news for team England that James Anderson seems to regain his form and come back to give trouble to the opponent team. England possible XI: Rory Burns, Dominic Sibley, Zak Crawley, Joe Root (c), Ollie Pope, Jos Buttler (wk), Chris Woakes, Sam Curran, Dominic Bess, Stuart Broad, James Anderson Pakistan Pitch Report: Weather condition: 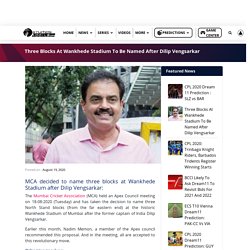 Earlier this month, Nadim Memon, a member of the Apex council recommended this proposal. And in the meeting, all are accepted to this revolutionary move. Dilip Vengsarkar: The former chief selector of India, Dilip Vengsarkar appeared in 116 Test matches between 1976 to 1992 and records the rare merit of making three Test centuries in continuous Test matches at the famous Lord’s Cricket Ground, London. Ajinkya Naik, the council member of Apex council has suggested a particular seat in the Wankhede Stadium after Mahendra Singh Dhoni to commemorate the memory of his six that helped India to win the World Cup, 2011. 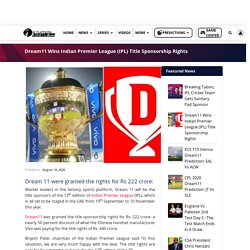 Dream11 was granted the title sponsorship rights for Rs. 222 crore- a nearly 50 percent discount of what the Chinese handset manufacturer Vivo was paying for the title rights of Rs. 440 crore. Brijesh Patel, chairman of the Indian Premier League said “In this situation, we are very much happy with the deal. The title rights are only for four months and only for the 13th edition of the IPL. Furthermore, Brijesh Patel has given confirmation that Dream11 overcome two other bidders, both are education technology platforms- Unacademy (Rs 171 crore) and Byju’s (Rs 201 crore).

NADA, UAE Mutually Take Dope Testing In IPL. Posted on - August 13, 2020 The National Anti-Doping Agency (NADA), has joined with National Anti-Doping Committee (NADO) of UAE and finally decided that they will mutually collect the sample of cricket players during 2020 IPL, which is scheduled to be held from 19th September to 10th November in Abu Dhabi, Dubai, and Sharjah. 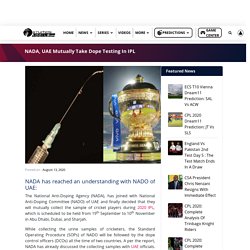 While collecting the urine samples of cricketers, the Standard Operating Procedure (SOPs) of NADO will be followed by the dope control officers (DCOs) all the time of two countries. A per the report, NADA has already discussed the collecting samples with UAE officials. KL Rahul First-Choice Wicketkeeper In Limited Overs. Posted on - August 16, 2020 After Mahendra Singh Dhoni ‘s international retirement, Rishabh Pant may feel a weight off his shoulders but the immensely talented KL Rahul is the probable first choice for the near future in white-ball cricket, feel three former Indian wicket-keepers. 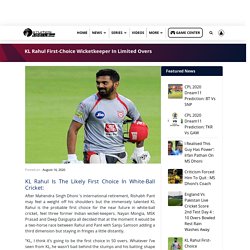 Nayan Mongia, MSK Prasad and Deep Dasgupta all decided that at the moment it would be a two-horse race between Rahul and Pant with Sanju Samson adding a third dimension but staying in fringes a little distantly. “KL, I think it’s going to be the first choice in 50 overs. Whatever I’ve seen from KL, he wasn’t bad behind the stumps and his batting shape improved in white ball cricket once he started to keep. “On form, KL is going to be my first choice and then you can look at Rishabh and give him chances,” Mongia, one of India’s finest wicket-keepers, said on Sunday to a leading sports website. England Vs Pakistan 2nd Test Match Prediction. Posted on - August 12, 2020 Whenever two imperfect sides are playing against each other in perfectly balanced conditions, then watching that match is the most exciting one. 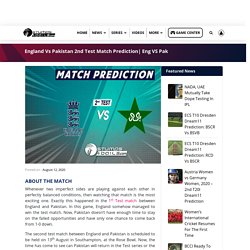 Exactly this happened in the 1st Test match between England and Pakistan. In this game, England somehow managed to win the test match. Now, Pakistan doesn’t have enough time to stay on the failed opportunities and have only one chance to come back from 1-0 down. England vs Pakistan 2020 2nd Test Dream11 Fantasy Cricket Tips. Posted on - August 12, 2020 The 2nd Test match between England and Pakistan is scheduled to be held on 13th August 2020. 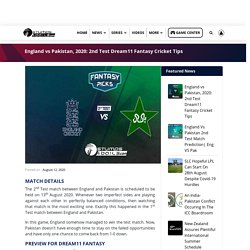 Whenever two imperfect sides are playing against each other in perfectly balanced conditions, then watching that match is the most exciting one. Exactly this happened in the 1st Test match between England and Pakistan. In this game, England somehow managed to win the test match. Now, Pakistan doesn’t have enough time to stay on the failed opportunities and have only one chance to come back from 1-0 down. Nomination Process To Elect Next Chairman Begins At ICC. Posted on - August 9, 2020 The sole agenda for the ICC Board, which will meet digitally on Monday, is to finalize the nomination process to elect Shashank Manohar ‘s successor as the next independent president of the world cricket body. 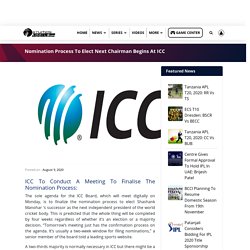 This is predicted that the whole thing will be completed by four weeks regardless of whether it’s an election or a majority decision. “Tomorrow’s meeting just has the confirmation process on the agenda. It’s usually a two-week window for filing nominations,” a senior member of the board told a leading sports website. A two-thirds majority is normally necessary in ICC but there might be a few board members who would like it to be a simple majority case among 17 members. 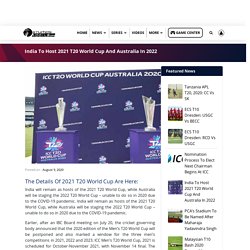 CPL 2020: Complete Team Analysis Of Barbados Tridents. Posted on - August 7, 2020 From 18th August to 10th September, the CPL 2020 is scheduled to be held at Trinidad and Tobago without any spectators due to COVID-19. 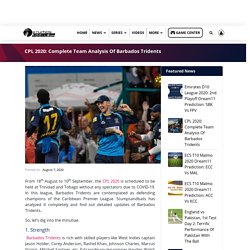 In this league, Barbados Tridents are contemplated as defending champions of the Caribbean Premier League. Stumpsandbails has analyzed it completely and find out detailed updates of Barbados Tridents. So, let’s dig into the minutiae. 1. Barbados Tridents is rich with skilled players like West Indies captain Jason Holder, Corey Anderson, Rashid Khan, Johnson Charles, Marcus Stoinis, Mitchell Santner, etc. Chinese Company VIVO Withdraw As 2020 IPL Title Sponsor. Posted on - August 5, 2020 After the criticism on social media, Chinese company VIVO has removed his names as the title sponsor of this year’s Indian Premier League. In the year 2018, VIVO had given Rs 2,199 crore for the contract of a five-years-time period.

On Sunday, the Indian cricket Board (BCCI) had declared that all IPL sponsors were being retained, but the Chinese firm VIVO pulled out his sponsorship after backlash on social media because of the war between India and China military forces in Ladakh in June. On Sunday, an IPL Governing council official told PTI that 2020 IPL will be played in UAE from 19th September to 10th November and all IPL sponsors had been retained for this edition. On conditions of security after the meeting of Sunday, he told “Now I can say only that all our IPL sponsors are with us. The 13th edition of IPL will be taken place in the UAE at three venues- Abu Dhabi, Dubai, and Sharjah- according to approval from the government. England Vs Pakistan 1st Test Match Prediction. Posted on - August 4, 2020. England vs Ireland 2020 3rd ODI Dream11 Prediction. Posted on - August 4, 2020 The 3rd ODI match of the three-match series is scheduled to be held on 4th August 2020 in between England and Ireland at the Ageas Bowl, Southampton.

The match will start at 3 PM local time (6:30 PM IST) (1 PM GMT). On Tuesday, England and Ireland will play their last ODI match. The team England has already won the series by winning the previous two matches but will have 10 points in ODI Super League to earn and because of the same cause, team Ireland also will upset the world champions. There is some expectation of couple changes in the teams for this game.

According to weather prediction, the chance of the shower is nil and the temperature is nearly 18-20 Degrees Celsius. UK Company Threatens To Seize Pakistan Cricket Team’s Assets. Posted on - August 1, 2020 The Pakistan cricket team is covered by a bubble during their tour of England by the novel coronavirus, but on the traveling side there is a different kind of risk. A UK based firm, Broadsheet LLC, has been threatening to seize the Pakistan cricket team’s properties over its $33 million dispute with the government.

According to a report on a leading sports website, Broadsheet had won an arbitration case against the state of Pakistan and the National Accountability Bureau (NAB) that also gave them court orders ‘to seize the assets of the national cricket team in Pakistan.’ The business could unleash the action soon, with the likes of Babar Azam, Azhar Ali, Sarfaraz Ahmed and others in the UK for the tour. Broadsheet has sent a letter to the lawyer for Pakistan, Allen & Overy, alleging that Pakistan and NAB have refused to pay more than $33 million they owe them. Top Five Players To Look Out For During IPL 2020. Posted on - July 29, 2020 IPL 2020 Is All Set To Start In The Month Of September: Indian Premier League ‘s thirteenth edition is all set to kick off this September.