UrlScan 3.1 : The Official Microsoft IIS Site. Overview UrlScan 3.1 is a security tool that restricts the types of HTTP requests that IIS will process. 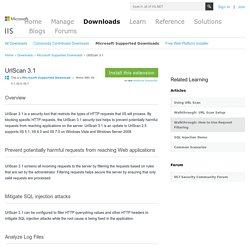 By blocking specific HTTP requests, the UrlScan 3.1 security tool helps to prevent potentially harmful requests from reaching applications on the server. UrlScan 3.1 is an update to UrlScan 2.5 supports IIS 5.1, IIS 6.0 and IIS 7.0 on Windows Vista and Windows Server 2008. Prevent potentially harmful requests from reaching Web applications UrlScan 3.1 screens all incoming requests to the server by filtering the requests based on rules that are set by the administrator. Mitigate SQL injection attacks UrlScan 3.1 can be configured to filter HTTP querystring values and other HTTP headers to mitigate SQL injection attacks while the root cause is being fixed in the application. 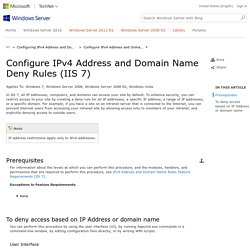 Applies To: Windows 7, Windows Server 2008, Windows Server 2008 R2, Windows Vista In IIS 7, all IP addresses, computers, and domains can access your site by default. To enhance security, you can restrict access to your site by creating a deny rule for all IP addresses, a specific IP address, a range of IP addresses, or a specific domain. For example, if you have a site on an intranet server that is connected to the Internet, you can prevent Internet users from accessing your intranet site by allowing access only to members of your intranet, and explicitly denying access to outside users.

You can perform this procedure by using the user interface (UI), by running Appcmd.exe commands in a command-line window, by editing configuration files directly, or by writing WMI scripts. To create a deny rule for IPv4 address and domain restriction, use the following syntax: The variable ipaddress string is a single IPv4 address. Getting a list of all sites served by IIS > 40Fingers Websolutions. By: Stefan Kamphuis In order to prepare for an upcoming move of all sites hosted on our webservers to a new location, one of the tasks was to list which sites are served by IIS, including all hostheaders defined for those sites. 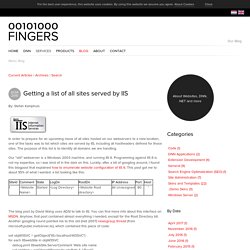 The purpose of this list is to identify all domains we are handling. Our "old" webserver is a Windows 2003 machine, and running IIS 6. Programming against IIS 6 is not my expertise, so i was kind of in the dark on this. Luckily, after a bit of googling around, I found this blogpost that explained how to enumerate website configuration of IIS 6. The blog post by David Wang uses ADSI to talk to IIS. Set objW3SVC = getObject(" for each IISwebSite in objW3SVC debug.print IISwebSite.ServerComment 'Web site name set objWeb = getObject(IISwebsite.adsPath & "/Root") rootPath = objWeb.Path next This was exactly the bit of information I was missing to finish the script.

C:\Inetpub\AdminScripts>enumsites > enumsites.txt This is the final version of the script: Bind multiple sites on same IP address and Port in SSL – varunm. Until IIS 7.5, the major limitation of IIS is that IIS will allow you to bind only one site for one IP: Port combination using an SSL certificate. 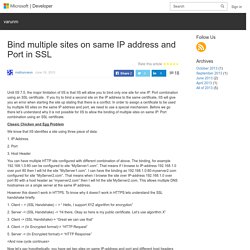 If you try to bind a second site on the IP address to the same certificate, IIS will give you an error when starting the site up stating that there is a conflict. In order to assign a certificate to be used by multiple IIS sites on the same IP address and port, we need to use a special mechanism. Before we go there let’s understand why it is not possible for IIS to allow the binding of multiple sites on same IP: Port combination using an SSL certificate.

Classic Chicken and Egg Problem We know that IIS identifies a site using three piece of data: Iis 7 - Add writing permission to PHP on IIS 7. Creating Rewrite Rules for the URL Rewrite Module : The Official Microsoft IIS Site. The URL rewrite module is an extension to IIS which is available as a download for your stand-alone IIS Server, and is also pre-installed on any website on Windows Azure Web Sites (WAWS) and available for your use. 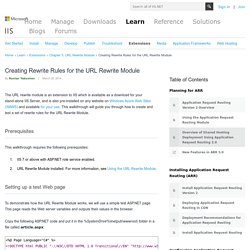