This Analysis Shows How Fake Election News Stories Outperformed Real News On Facebook - BuzzFeed News. Civic Engagement Strongly Tied to Local News Habits. In local communities, the civically engaged – the people who vote, volunteer and connect with those around them – play a key role in community life. 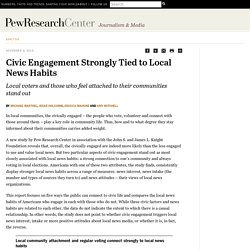 Thus, how and to what degree they stay informed about their communities carries added weight. A new study by Pew Research Center in association with the John S. and James L. Knight Foundation reveals that, overall, the civically engaged are indeed more likely than the less engaged to use and value local news. But two particular aspects of civic engagement stand out as most closely associated with local news habits: a strong connection to one’s community and always voting in local elections. Younger adults more likely than older to prefer reading news. When it comes to technology’s influence on America’s young adults, reading is not dead – at least not the news. 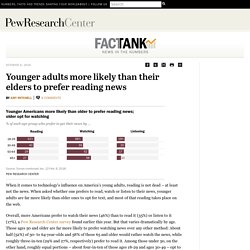 When asked whether one prefers to read, watch or listen to their news, younger adults are far more likely than older ones to opt for text, and most of that reading takes place on the web. Overall, more Americans prefer to watch their news (46%) than to read it (35%) or listen to it (17%), a Pew Research Center survey found earlier this year. But that varies dramatically by age. Those ages 50 and older are far more likely to prefer watching news over any other method: About half (52%) of 50- to 64-year-olds and 58% of those 65 and older would rather watch the news, while roughly three-in-ten (29% and 27%, respectively) prefer to read it. Employment picture darkens for journalists at digital outlets. It probably comes as no surprise that jobs for journalists at newspapers continue to disappear. 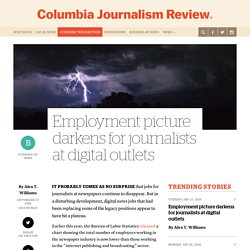 But in a disturbing development, digital news jobs that had been replacing some of the legacy positions appear to have hit a plateau. Earlier this year, the Bureau of Labor Statistics released a chart showing the total number of employees working in the newspaper industry is now lower than those working in the “internet publishing and broadcasting” sector. Given the struggles of the newspaper industry, and the increasing popularity of “digital native” news publishers, such figures may seem intuitive. Yet it only captures how many employees work in these industries—not how many journalists. With digital native websites becoming more prominent, it is worth exploring how many journalists work in this sector and whether its growth is likely to offset losses in the newspaper industry.

State of the News Media 2016. Eight years after the Great Recession sent the U.S. newspaper industry into a tailspin, the pressures facing America’s newsrooms have intensified to nothing less than a reorganization of the industry itself, one that impacts the experiences of even those news consumers unaware of the tectonic shifts taking place. 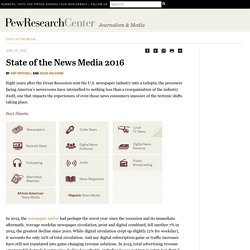 Fact Sheets: In 2015, the newspaper sector had perhaps the worst year since the recession and its immediate aftermath. Average weekday newspaper circulation, print and digital combined, fell another 7% in 2015, the greatest decline since 2010. While digital circulation crept up slightly (2% for weekday), it accounts for only 22% of total circulation. And any digital subscription gains or traffic increases have still not translated into game-changing revenue solutions. The industry supports nearly 33,000 full-time newsroom employees.

Despite current financial strength, though, TV-based news can’t ignore the public’s pull toward digital. News Use Across Social Media Platforms 2016. A majority of U.S. adults – 62% – get news on social media, and 18% do so often, according to a new survey by Pew Research Center, conducted in association with the John S. and James L. 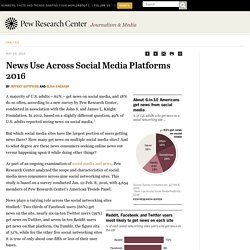 Knight Foundation. Books and newspapers will do just fine in 2016. Magazines? Not so much. What makes highly creative people different from the rest of us? 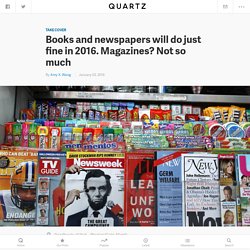 In the 1960s, psychologist and creativity researcher Frank X. Barron set about finding out. Barron conducted a series of experiments on some of his generation’s most renowned thinkers in an attempt to isolate the unique spark of creative genius. In a historic study, Barron invited a group of high-profile creators—including writers Truman Capote, William Carlos Williams, and Frank O’Connor, along with leading architects, scientists, entrepreneurs, and mathematicians—to spend several days living in a former frat house on the University of California at Berkeley campus. Around half of newspaper readers rely only on print edition.

This weekend, Boston Globe editorial employees received an unusual request: Could anyone run a paper route? 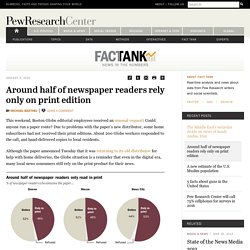 Due to problems with the paper’s new distributor, some home subscribers had not received their print editions. About 200 Globe workers responded to the call, and hand-delivered copies to local residents. Although the paper announced Tuesday that it was returning to its old distributor for help with home deliveries, the Globe situation is a reminder that even in the digital era, many local news consumers still rely on the print product for their news. How social media is reshaping news. The ever-growing digital native news world now boasts about 5,000 digital news sector jobs, according to our recent calculations, 3,000 of which are at 30 big digital-only news outlets. 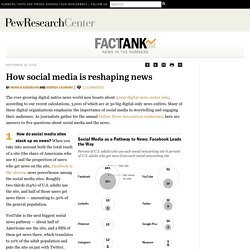 Many of these digital organizations emphasize the importance of social media in storytelling and engaging their audiences. As journalists gather for the annual Online News Association conference, here are answers to five questions about social media and the news. eBook_NewSchoolPressReleases. Evolution of the PR industry. What about PR has changed since you started your career? 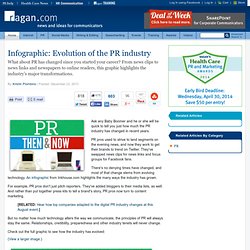 From news clips to news links and newspapers to online readers, this graphic highlights the industry's major transformations. By Kristin Piombino | Posted: December 23, 2013 Ask any Baby Boomer and he or she will be quick to tell you just how much the PR industry has changed in recent years. PR pros used to strive to land segments on the evening news, and now they work to get their brands to trend on Twitter. They've swapped news clips for news links and focus groups for Facebook fans.

2013 news consumption trends. News: Personalized or Serendipitous? Every digital news designer faces the question: should the traditional serendipity of contents be preserved or should we go full steam for personalization? 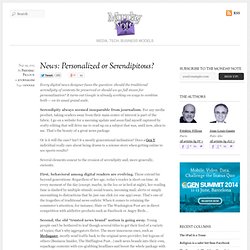 It turns out Google is already working on ways to combine both — on its usual grand scale. Serendipity always seemed inseparable from journalism. For any media product, taking readers away from their main center of interest is part of the fabric. I go on a website for a morning update and soon find myself captured by crafty editing that will drive me to read up on a subject that was, until now, alien to me. Pew surveys of audience habits suggest perilous future for news. News organizations have been confronting the problem of a shrinking audience for more than a decade, but trends strongly suggest that these difficulties may only worsen over time. Today’s younger and middle-aged audience seems unlikely to ever match the avid news interest of the generations they will replace, even as they enthusiastically transition to the Internet as their principal source of news. 12 trends shaping digital news. The internet and digital devices are changing our news consumption habits.

Here are 12 trends to put the rapidly shifting digital news landscape into perspective: Generation on the Go: Creating Branded Content for a Sharing Culture. October 22, 2013 Marketers and PR professionals worldwide are embracing branded content to promote products and services, generate sales leads, establish thought leadership and build brand awareness. Marketers are realizing that print ads, TV commercials and banner ads aren’t enough anymore. Branded content offers a deeper, more meaningful experience for information-hungry consumers. But creating engaging content for compelling websites, Facebook pages, e-newsletters and white papers is just part of the equation. Today’s content also needs to be shareable and mobile if you want to connect with on-the-go customers, who rely on smartphones and tablets to stay in touch with their friends and coworkers around the clock. According to Forrester Research, mobile is driving a “second Internet revolution.”

Survey: People Aren’t News Reading; They’re ‘News Snacking’ [Infographic] Mobiles Republic, a global news syndication company, recently released the results from its 2013 survey of news reading habits. The study, based off the responses of over 8,000 of its News Republic® app users, indicates that news consumption is rising; as the number of news outlets grows, so do readers’ appetites for accurate, multi-sourced and fresh news. Here are key takeaways and the full infographic: State of News Media 2014. The news media is even worse than you think. Anyone who feels cynical about the U.S. media has been having a good few weeks. There have been the high profile goofs — by CNN, in its coverage of the Boston bombings, and by Howard Kurtz, the famous media “critic,” in a blog post about gay athlete Jason Collins.

The Tribune Company faces a potential takeover by the, er, colorful Koch brothers. Pew Report: The State of the News Media 2011. Overview. State of the News Media 2012. 72% of Americans follow local news closely. The Demographics of Mobile News. Americans Regain Some Confidence in Newspapers, TV News. WASHINGTON, D.C. -- Americans' confidence in newspapers and television news rebounded slightly in the past year, having been stuck at record lows since 2007. Survey: Trust In Online Ads Grows, While Trust in Print and TV Ads Drops.

It’s no secret that most of us put more stock in the recommendations we get from friends than traditional forms of advertising. Reports of the Death of Broadcast News Are Greatly Exaggerated. NBC in 2011 extended its winning streak in the nightly news race to four years, as NBC Nightly News With Brian Williams averaged 8.76 million total viewers, easily outpacing the 6:30 p.m. broadcasts on ABC and CBS. Per Nielsen live-plus-same-day data, NBC Nightly News enjoyed its biggest year since 2006, when it averaged 8.8 million viewers per broadcast.

Last year was also the third most watched of the Williams era, which began on Dec. 2, 2004. Deliveries for the newscast grew 3 percent from 8.49 million in 2010. Next gen of news consumers relies on social media. An Infographic Look At Generational Media Use. Time Inc. Measures Consumers' Emotional Response to Media. If publishers think they've been covering the bases with an anytime, anywhere content strategy, they might be shocked to learn the results of a recent Time Inc. study conducted with Innerscope Research. The Tablet Revolution and What it Means for the Future of News. Eighteen months after the introduction of the iPad, 11% of U.S. adults now own a tablet computer of some kind.