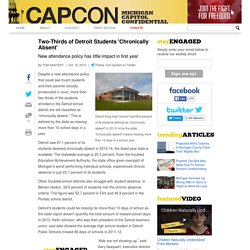 "Chronically absent" means missing more than 10 days in a school year. Despite a new attendance policy that could see truant students and their parents actually prosecuted in court, more than two-thirds of the students enrolled in the Detroit school district are still classified as “chronically absent.” Detroit Public Schools Bankruptcy Could Cost the State $3.4 Billion [Michigan Capitol Confidential] The Detroit Public Schools' $1.3 billion in pension obligations is the major roadblock to the school district filing for bankruptcy, according to a recent state of Michigan analysis. 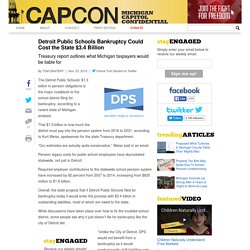 That $1.3 billion is how much the district must pay into the pension system from 2016 to 2031, according to Kurt Weiss, spokesman for the state Treasury department. “Our estimates are actually quite conservative,” Weiss said in an email. Pension legacy costs for public school employees have skyrocketed statewide, not just in Detroit. Detroit’s public schools: Of rats and debts. SOME schools have black mould creeping up the walls; at others, mushrooms sprout from them. 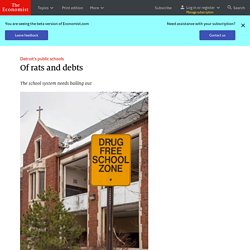 At Palmer Park Preparatory Academy, pieces of the ceiling are falling on pupils’ heads while rats run around. Jerry L. White Centre High School has no heating. Western International High School does not have enough books for its pupils, who are crammed into classes of up to 45 children. One reason for this is that of the $7,450-per-pupil grant the school district will receive this year, $4,400 will be spent on debt servicing and benefits for retired teachers, according to the Citizens Research Council, a Michigan think-tank. 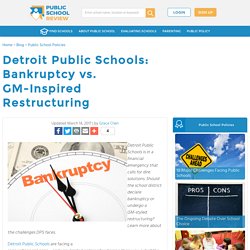 Should the school district declare bankruptcy or undergo a GM-styled restructuring? Learn more about the challenges DPS faces. Detroit Public Schools are facing a serious financial crisis – and very limited options for digging their way out of the monetary hole. A Historical Perspective on the Crumbling Detroit Public Schools. The Detroit Public School system is on the brink of total financial collapse, teachers are protesting deplorable facility conditions through staged sick-outs, and students and parents struggle to find adequate education options in close proximity to home. 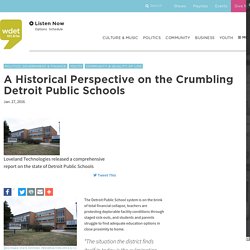 “The situation the district finds itself in today is the culmination of a long series of decisions and events, dating back to the start of public education in Detroit nearly 200 years ago.” … that’s the argument set forth in a new 18-month-long study done by Loveland in Detroit. What’s Really Wrong with Detroit Public Schools. Detroit Public Schools have the worst test scores and graduation rates in the nation, but there are more problems plaguing the district. 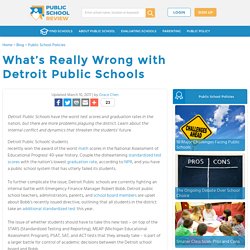 Learn about the internal conflict and dynamics that threaten the students' future. Detroit Public Schools’ students recently won the award of the worst math scores in the National Assessment of Educational Progress’ 40-year history.