George VI. George VI (Albert Frederick Arthur George; 14 December 1895 – 6 February 1952) was King of the United Kingdom and the Dominions of the British Commonwealth from 11 December 1936 until his death. 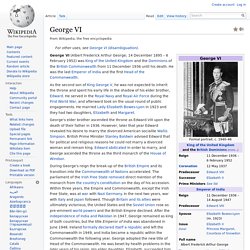 He was the last Emperor of India and the first Head of the Commonwealth. As the second son of King George V, he was not expected to inherit the throne and spent his early life in the shadow of his elder brother, Edward. He served in the Royal Navy and Royal Air Force during the First World War, and afterward took on the usual round of public engagements. He married Lady Elizabeth Bowes-Lyon in 1923 and they had two daughters, Elizabeth and Margaret. George's elder brother ascended the throne as Edward VIII upon the death of their father in 1936. Early life[edit] Four kings: Edward VII (far right), his son George, Prince of Wales, later George V (far left), and grandsons Edward, later Edward VIII (rear), and Albert, later George VI (foreground), c. 1908 Military career and education[edit] Arms[edit] Starfish Project, stammering therapy courses with Free life-time support.

Lionel Logue and the king. When we came home last Sunday from The King's Speech we began to talk about the House of Windsor and all we'd forgotten about it or never knew. 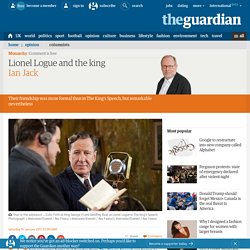 "So how many brothers did George VI actually have? " "Well, there's Edward the Abdicator and there's the other one mentioned in the film – John, the one we never used to hear about, who had epilepsy and died young. And then there's a couple of dukes, Kent, the one who died in the air crash, and the other one – Norfolk? " "You mean Gloucester," my wife said, and so I did. Norfolk is the Catholic duke who lives in Arundel; he has nothing to do with it. "Princess Marina? " "No, I think Marina married Kent. " In fact, she meant the Earl of Harewood, whom George VI's sister Princess Mary (aka the Princess Royal) married when Harewood was still Viscount Lascelles. From our imperfect knowledge we assembled what we could of the Windsor tree, going no further back than George V and Queen Mary; Michael Gambon and Claire Bloom play them in the film.

The King's Speech: the real story. This became a mutual love the day after a Luftwaffe bomb landed on Buckingham Palace. 'I’m glad we’ve been bombed,’ Queen Elizabeth said memorably. 'Now we can look the East End in the face.’ 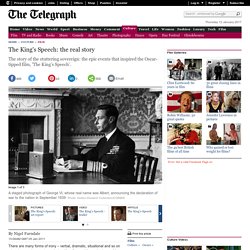 John Boorman’s autobiographical film Hope and Glory, about growing up in London during the Blitz, captures this relationship well. In one scene the family sits tensely by the wireless set on Christmas Day listening to the King’s speech. When it is over they sigh with relief and comment cheerfully upon how his stammer seems to be improving. For their part, the Nazis seemed to regard King George VI as a joke. On the surface, Edward VIII seemed to be much better equipped to be king than the brother who succeeded him. Lionel George Logue. Lionel George Logue (1880-1953), speech therapist, was born on 26 February 1880 at College Town, Adelaide, eldest of four children of South Australian-born parents George Edward Logue, clerk, and his wife Lavinia, née Rankin. 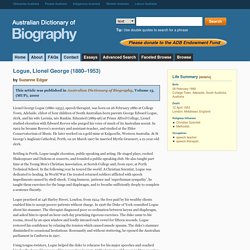 Educated (1889-96) at Prince Alfred College, Lionel studied elocution with Edward Reeves who purged his voice of much of its Australian accent. In 1902 he became Reeves's secretary and assistant-teacher, and studied at the Elder Conservatorium of Music. He later worked on a gold mine at Kalgoorlie, Western Australia. At St George's Anglican Cathedral, Perth, on 20 March 1907 he married Myrtle Gruenert, a 21-year-old clerk. Settling in Perth, Logue taught elocution, public speaking and acting. Logue practised at 146 Harley Street, London, from 1924: the fees paid by his wealthy clients enabled him to accept poorer patients without charge. Citation details. History - Edward VIII. History of the Monarchy > The House of Windsor > George VI. George VI became King unexpectedly following the abdication of his brother, King Edward VIII, in 1936. 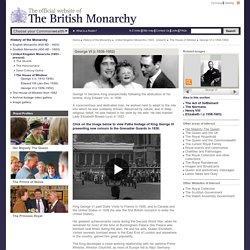 A conscientious and dedicated man, he worked hard to adapt to the role into which he was suddenly thrown. Reserved by nature, and of deep religious belief, he was helped in his work by his wife. He had married Lady Elizabeth Bowes-Lyon in 1923. Click on the image below to view Pathe footage of King George VI presenting new colours to the Grenadier Guards in 1938: George VI - King - Biography.com. George VI served as king of the United Kingdom during World War II and was an important symbolic leader. 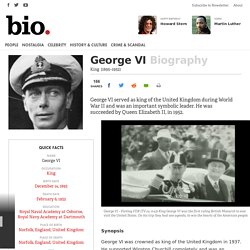 He was succeeded by Queen Elizabeth II, in 1952. Synopsis George VI was crowned as king of the United Kingdom in 1937. He supported Winston Churchill completely and was an important symbolic leader for the British people during World War II, even visiting armies on the battle fronts. He was succeeded by his daughter, Queen Elizabeth II, after he died of lung cancer in 1952. Early Life.