Architecture, Psychology... and Furniture? Project-based learning, maker lessons, and hands-on learning are all the rage in elementary and middle school, but can high school teachers do these projects within the confines of curriculum coverage, time limits, and disciplinary silos? 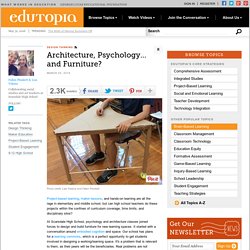 At Scarsdale High School, psychology and architecture classes joined forces to design and build furniture for new learning spaces. It started with a conversation around embodied cognition and space. Why Phones Don't Belong in School. A recent Los Angeles Times’ article reveals that teachers across America must compete with students’ phones for attention. 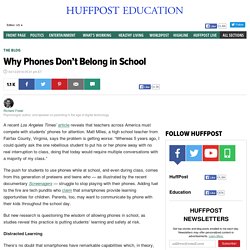 Matt Miles, a high school teacher from Fairfax County, Virginia, says the problem is getting worse: “Whereas 5 years ago, I could quietly ask the one rebellious student to put his or her phone away with no real interruption to class, doing that today would require multiple conversations with a majority of my class.” The push for students to use phones while at school, and even during class, comes from this generation of preteens and teens who — as illustrated by the recent documentary Screenagers — struggle to stop playing with their phones. Adding fuel to the fire are tech pundits who claim that smartphones provide learning opportunities for children. Parents, too, may want to communicate by phone with their kids throughout the school day. Politically-Challenged: Texas Tech Edition.

The Big List of Educational Grants and Resources. Grants NEW! 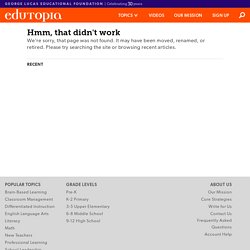 The New Georgia Encyclopedia. Their Eyes Were Watching God. The Unsung Heroes in our Schools  I write about heroes. 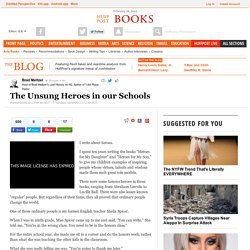 I spent ten years writing the books "Heroes for My Daughter" and "Heroes for My Son," to give my children examples of inspiring people whose virtues, talents and wisdom made them such great role models. There were some famous heroes in those books, ranging from Abraham Lincoln to Lucille Ball. There were also lesser-known "regular" people. But regardless of their fame, they all proved that ordinary people change the world. One of those ordinary people is my former English teacher Sheila Spicer.

When I was in ninth grade, Miss Spicer came up to me and said, "You can write. " For the entire school year, she made me sit in a corner and do the honors work, rather than what she was teaching the other kids in the classroom. What she was really telling me was, "You're going to thank me later. " A decade later, when my first novel was published, I knocked on her classroom door. In our schools today, there are many Mrs. This is especially true of our school librarians. Multiple intelligences - howard gardners multiple intelligences theory - visual auditory kinesthetic learnings styles VAK model. Multiple intelligences theory Howard Gardner's Multiple Intelligence Theory was first published in Howard Gardner's book, Frames Of Mind (1983), and quickly became established as a classical model by which to understand and teach many aspects of human intelligence, learning style, personality and behaviour - in education and industry. 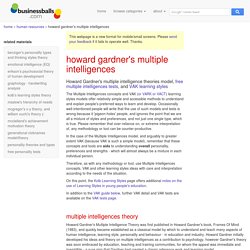 Howard Gardner initially developed his ideas and theory on multiple intelligences as a contribution to psychology, however Gardner's theory was soon embraced by education, teaching and training communities, for whom the appeal was immediate and irresistible - a sure sign that Gardner had created a classic reference work and learning model. Middle School Reading Lists 100 Years Ago vs. Today. There’s a delightful and true saying, often attributed to Joseph Sobran, that in a hundred years, we’ve gone from teaching Latin and Greek in high school to teaching remedial English in college. 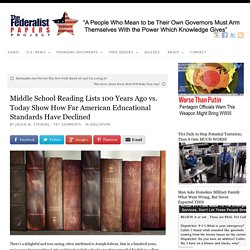