The internet goes to Washington

Facebook. Google. Twitter. Netflix. Sharing Economy. Uber. Amazon. Lobbying in Europe. 2016 Elections. Spotify turns up volume in D.C. - Anna Palmer and Tony Romm. Spotify is beefing up its Washington presence as it readies for a fight with Apple and others over online music streaming. 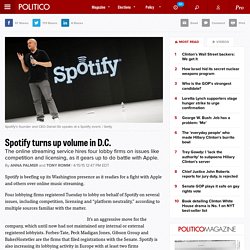 Four lobbying firms registered Tuesday to lobby on behalf of Spotify on several issues, including competition, licensing and “platform neutrality,” according to multiple sources familiar with the matter. Story Continued Below It’s an aggressive move for the company, which until now had not maintained any internal or external registered lobbyists.

Forbes-Tate, Peck Madigan Jones, Gibson Group and BakerHostetler are the firms that filed registrations with the Senate. Spotify is also increasing its lobbying activity in Europe with at least two firms representing it before the European Union, and it has listed a new job posting there for a vice president of public policy. Spotify declined to comment. The K Street investment comes amid a flurry of regulatory activity over online streaming and radio. The FTC declined comment, and DOJ did not return a request for comment. Tech titans tell Senate to go big on NSA overhaul. Facebook, Google, Microsoft and other top technology companies are warning the Senate not to follow the House’s lead with a compromised plan to reform the National Security Agency. 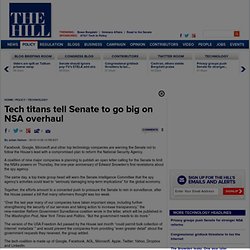 A coalition of nine major companies is planning to publish an open letter calling for the Senate to limit the NSA’s powers on Thursday, the one-year anniversary of Edward Snowden’s first revelations about the spy agency. The same day, a top trade group head will warn the Senate Intelligence Committee that the spy agency’s activities could lead to “seriously damaging long-term implications” for the global economy. Together, the efforts amount to a concerted push to pressure the Senate to rein in surveillance, after the House passed a bill that many reformers thought was too weak. The tech coalition is made up of Google, Facebook, AOL, Microsoft, Apple, Twitter, Yahoo, Dropbox and LinkedIn. Open letter from Aereo CEO: You gotta fight for your antenna rights. Chet Kanojia, the chief executive officer of the Aereo broadcast streaming service that the Supreme Court declared illegal last week, isn't rolling over quite yet. 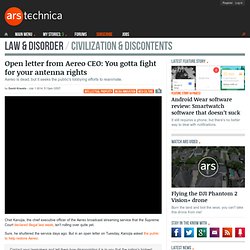 Sure, he shuttered the service days ago. But in an open letter on Tuesday, Kanojia asked the public to help restore Aereo: Contact your lawmakers and tell them how disappointing it is to you that the nation's highest court has issued a decision that could take away your right to use a cloud-based antenna to access live over-the-air broadcast television.The spectrum that the broadcasters use to transmit over-the-air programming belongs to the American public and you should have a right to access that programming whether your antenna sits on the roof of your home, on top of your television, or in the cloud.Ask your elected officials to take action to protect your right use an antenna to access live free-to-air broadcasts, including a modern antenna located in the cloud. LinkedIn registers first Washington lobbyist. Monument Policy Group has worked for LinkedIn Corp. since April 10, documents that were filed this week indicate. 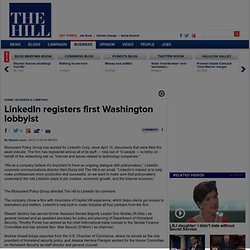 The firm has registered almost all of its staff — nine out of 10 people — to lobby on behalf of the networking site on “Internet and issues related to technology companies.” “We as a company believe it's important to have an ongoing dialogue with policymakers,” LinkedIn corporate communications director Hani Durzy told The Hill in an email. “LinkedIn's mission is to help make professionals more productive and successful, so we want to make sure that policymakers understand the role LinkedIn plays in job creation, economic growth, and the Internet economy.” Tumblr snags Andrew McLaughlin, former White House staffer. Pandora is lobbying Congress to establish fair royalty rates. Pandora has reportedly spent more than $50,000 this year lobbying Congress to establish a more equal system for how much different forms of radio pay in royalties. 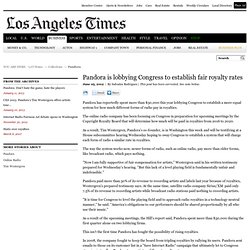 The online radio company has been focusing on Congress in preparation for upcoming meetings by the Copyright Royalty Board that will determine how much will be paid in royalties from 2016 to 2020. As a result, Tim Westergren, Pandora's co-founder, is in Washington this week and will be testifying at a House subcommittee hearing Wednesday hoping to sway Congress to establish a system that will charge each form of radio a similar rate in royalties. The way the system works now, newer forms of radio, such as online radio, pay more than older forms, like broadcast radio, which pays nothing. "Now I am fully supportive of fair compensation for artists," Westergren said in his written testimony prepared for Wednesday's hearing. Tech Companies Stoke Fears of a Talent Shortage to Get Cheaper Labor.