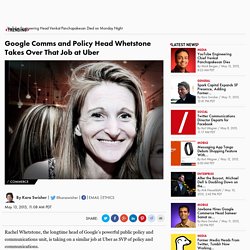 That position has been held by David Plouffe, the high-profile former adviser to President Barack Obama, who was hired less than a year ago. According to the company, he will become a chief adviser to the company and to CEO Travis Kalanick as well as joining the board of the ride-sharing startup. Plouffe will have what is described as a more strategic and external focus, rather than a day-to-day one. Plouffe was hired last August, after an extensive search by Kalanick himself, who was looking for a “campaign manager” to head Uber’s policy and communications strategy and fight the intense efforts by the taxi industry to slow its fast expansion. 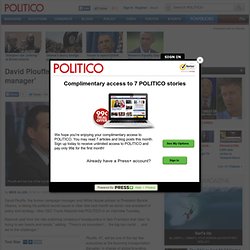 Kalanick said from the ride-matching company’s headquarters in San Francisco that Uber “is trying to win hearts and minds,” adding: “There’s an incumbent … the big-taxi cartel … and we’re the challenger.” Continue Reading Plouffe, 47, will be one of the top few executives at the booming transportation disruptor, in charge of global branding, communications and policy – as Kalanick put it, Uber’s “campaign manager.”

“City Councils are voting on Uber all the time, and we have state legislatures voting on us, on the regular,” Kalanick said. Uber’s Brilliant Strategy to Make Itself Too Big to Ban. Uber The question of how Uber would spend its billion-dollar investment was never really much of a riddle. 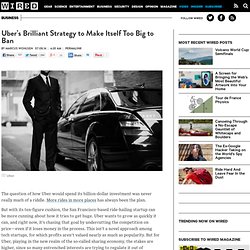 More rides in more places has always been the plan. But with its ten-figure cushion, the San Francisco-based ride-hailing startup can be more cunning about how it tries to get huge. Victory for Lyft and Uber in Seattle council vote. By Dan Raile On July 14, 2014 After 15 months of continuous negotiations, Lyft and Uber will be able to operate (fairly) freely again in Seattle. 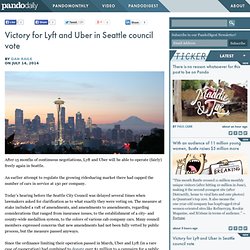 An earlier attempt to regulate the growing ridesharing market there had capped the number of cars in service at 150 per company. Today’s hearing before the Seattle City Council was delayed several times when lawmakers asked for clarification as to what exactly they were voting on. The measure at stake included a raft of amendments, and amendments to amendments, regarding considerations that ranged from insurance issues, to the establishment of a city- and county-wide medallion system, to the colors of various cab company cars. Many council members expressed concerns that new amendments had not been fully vetted by public process, but the measure passed anyways. Seattle was one of the original cities into which Lyft expanded in 2013 after rapid success in its hometown of San Francisco, and it was an early entry for UberX as well. Inside Uber’s Political War Machine. The ride-sharing firm is an outlaw in many cities. 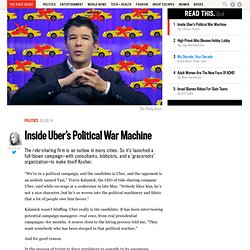 So it’s launched a full-blown campaign—with consultants, lobbyists, and a ‘grassroots’ organization—to make itself Kosher. “We’re in a political campaign, and the candidate is Uber, and the opponent is an asshole named Taxi,” Travis Kalanick, the CEO of ride-sharing company Uber, said while on stage at a conference in late May. “Nobody likes him, he’s not a nice character, but he’s so woven into the political machinery and fabric that a lot of people owe him favors.” Kalanick wasn’t bluffing. Uber really is the candidate: It has been interviewing potential campaign managers--real ones, from real presidential campaigns--for months. Regulators Vs. Uber & Friends: The Final Battle For Taxi Domination? You know businesses are in trouble when they have to rally customers in a social media campaign to defend themselves against government regulators. 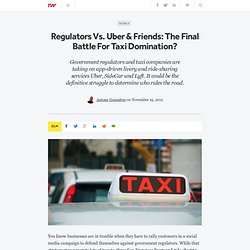 While that strategy may generate lots of tweets, three San Francisco livery and ride-sharing businesses are about to find out just how much it will or won't impress city bureaucrats. Last week, Lyft, SideCar and Uber were each cited $20,000 by the California Public Utilities Commission (CPUC) for running unlicensed taxi services. The services have 20 days to pay the fine or appeal. Making matters worse for Uber, two drivers for San Francisco-based Luxor Cab have filed a class-action lawsuit, claiming the high-end livery service is unfairly taking money from the pockets of traditional cabbies by not playing by the same rules. The Issues The companies - which all use smartphone apps to let customers arrange rides, argue they are not taxi services and thus don't have to play by those rules. The Rubber Meets The Road In San Francisco Safety First?