Finally Global? Turntable.fm Doing Deals with Labels (Report) Turntable.fm's Could Go Global With New Major Licensing Deals Turntable.fm has signed a licensing deal with EMI and is close to completing deals with Universal Music Group and Sony Music Entertainment, according to CNET. 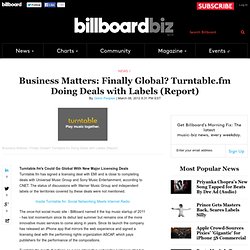 The status of discussions with Warner Music Group and independent labels or the territories covered by these deals were not mentioned. Inside Turntable.fm: Social Networking Meets Internet Radio The once-hot social music site - Billboard named it the top music startup of 2011 - has lost momentum since its debut last summer but remains one of the more innovative music services to come along in years. Since its launch the company has released an iPhone app that mirrors the web experience and signed a licensing deal with the performing rights organization ASCAP, which pays publishers for the performance of the compositions. Turntable.fm Goes Legit, Signs Deals With Major Music Labels. The biggest question hanging over social music startup Turntable.fm was whether the major labels would let it survive. 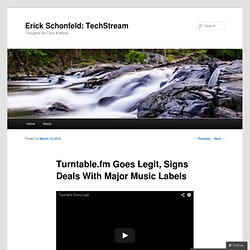 The answer to that question is, yes. Turntable chairman Seth Goldstein is announcing at SXSW that after 9 months of negotiating, Turntable has signed licensing agreements with all the major music labels. I caught up with Seth yesterday at the Four Seasons in Austin, where he told me about the deal in the video interview above. (Greg Sandoval at CNET caught wind of the news a few days ago, and now it is confirmed). Turntable launched less than a year ago, and now has reached one million users. Exclusive: Turntable.FM Signs Licensing Deals With All Four Major Labels. "This feels like an all-time record speed launch - when we launched we really didn't come at this from the music industry, it was all new to us," Goldstein told Billboard.biz of the nine-month-old service's new licensing deals. 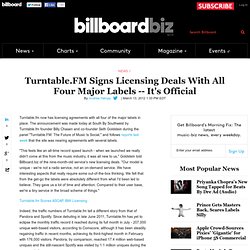 "Our model is unique - we're not a radio service, not an on-demand service. We have interesting aspects that really require some out-of-the-box thinking. We felt that from the get-go the labels were absolutely different from what I'd been led to believe. They gave us a lot of time and attention. Compared to their user base, we're a tiny service in the broad scheme of things. " Turntable Gets Labels On Board, International Launches Coming Over Next Few Months. By Adrianne Jeffries 3/14/12 11:43am Share this: One of Turntable.fm’s earliest proponents was a music blog in Germany that helped send the music sharing game viral. 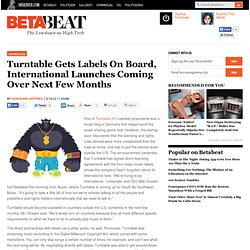 However, the startup soon discovered that the licensing and rights rules abroad were more complicated than the rules at home, and had to pull the service down outside the U.S. Lady Gaga And Kanye West Investing In Turntable.fm. Turntable.fm Really Is Awesome. Is It Legal? Turntable.fm is a little miracle that does something simple and essential: It lets you play your favorite songs for your friends and strangers on the Web, in real time, for free. 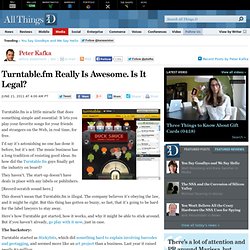 I’d say it’s astonishing no one has done it before, but it’s not: The music business has a long tradition of resisting good ideas. So how did the Turntable.fm guys finally get the industry on board? They haven’t. The start-up doesn’t have deals in place with any labels or publishers. [Record-scratch sound here.] This doesn’t mean that Turntable.fm is illegal. Here’s how Turntable got started, how it works, and why it might be able to stick around. The backstory: Turntable started as Stickybits, which did something hard to explain involving barcodes and geotagging, and seemed more like an art project than a business. This spring, CEO Billy Chasen abandoned that idea and used his remaining money to build Turntable. Turntable.fm closes $7.5 million financing at a $37.5 million valuation. Turntable.fm and the Siren Song of the Start-up Pivot. 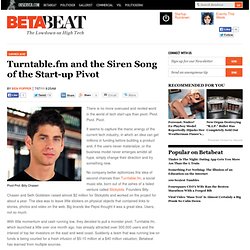 Billy Chasen There is no more overused and reviled word in the world of tech start-ups than pivot. Pivot. It seems to capture the manic energy of the current tech industry, in which an idea can get millions in funding before building a product and, if the users never materialize, or the business model never emerges amidst all hype, simply change their direction and try something new. No company better epitomizes this idea of second chances than Turntable.fm, a social music site, born out of the ashes of a failed venture called Stickybits. With little momentum and cash running low, they decided to pull a monster pivot. Exclusive: Turntable.fm’s #1 Spinner, DJ Woooooo, Shares his Secrets Update: Fred Wilson, Kleiner Perkins and Accel in Bidding War Over Turntable.fm “Pivoting is sort of unique to the tech world,” said Kevin Ryan, probably New York’s most successful serial entrepreneur.

As one of the co-founders of betaworks, Mr. Undo Hubub.