The internet goes to Washington 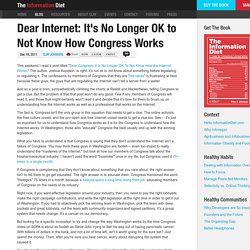 " The author, Joshua Kopstein, is right: it's not ok to not know about something before legislating or regulating it. Who Will Speak on Behalf of Social Media to the Next Congress? Maury Litwack is a lobbyist, former Hill staffer, opinion writer, and founder of Capitol Plan – A Comprehensive Washington Advocacy Strategy. 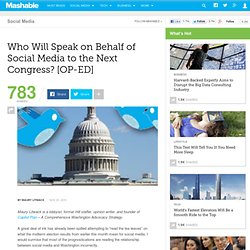 A great deal of ink has already been spilled attempting to “read the tea leaves” on what the midterm election results from earlier this month mean for social media. I would surmise that most of the prognostications are reading the relationship between social media and Washington incorrectly. Analysis has focused on which member of Congress supports or opposes important social media issues such as net neutrality and privacy. This analysis is off because it doesn't address the bigger question — who speaks for social media in Washington? Who speaks to this group of more than 100 new members of Congress? Isolationist no more: The Internet goes to Washington. Monday’s launch of a new think tank called DisCo that wants to educate Congress about disruptive technologies is just one of several new efforts proposed by the Internet and startup community to get their voices heard. 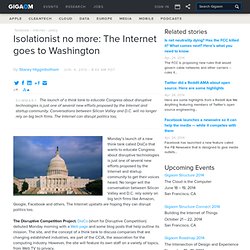 No longer will the conversation between Silicon Valley and D.C. rely solely on big tech firms like Amazon, Google, Facebook and others. The Internet upstarts are hoping they can disrupt politics too. The Disruptive Competition Project. DisCo (short for Disruptive Competition) debuted Monday morning with a Web page and some blog posts that help outline its mission. Why Silicon Valley is the new revolving door for Obama staffers. 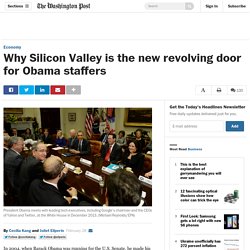 Senate, he made his first visit to Google’s campus and saw firsthand how a search on the Internet worked. It left such a strong impression that he returned during his first presidential run vowing to protect the industry. Now, near the end of his administration, the extent of Obama’s commitment to Silicon Valley has become clear. And nowhere is that more evident than net neutrality, an issue where the president pressured the government to pass regulations with major implications for how consumers experience the Internet. The rules, passed Thursday by the Federal Communications Commission, limit Internet providers from auctioning off the fastest download speeds to the highest bidders, all but ensuring that Web firms — not cable companies — will retain control of what consumers see on their browsers. On Thursday, former White House press secretary Jay Carney joined Amazon as its senior vice president for worldwide corporate affairs.

How a Silicon Valley Group Is Reaching Out to GOP - Washington Wire. What the New Internet Lobby Looks Like. The Internet Association formally threw open its doors for business Wednesday, unveiling the 14 Web companies that make up its membership (they include AOL, Amazon, Facebook, Google, LinkedIn, RackSpace and Zynga, among others). 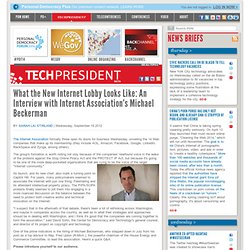 The group's formation is worth noting not only because of the companies' newfound voice in the wake of the protests against the Stop Online Piracy Act and the PROTECT IP Act, but because it's going to be one of the more deep-pocketed organizations that are vying to be the voice of the larger "Internet community.

" Its launch, and its new chief, also mark a turning point on Capitol Hill. For years, many policymakers seemed to associate the Internet with just one thing: Filesharing and its attendant intellectual property piracy. The PIPA/SOPA protests finally seemed to jolt them into engaging in a more nuanced discussion on the balance between the need to protect both creative works and technical innovation on the Internet. Please introduce yourself to our audience. Facebook, Google, Amazon join forces in D.C. lobby - Post Tech. Posted at 12:01 AM ET, 09/19/2012 Sep 19, 2012 04:01 AM EDT TheWashingtonPost Internet titans Facebook, Google, Amazon and Yahoo on Wednesday will launch a new lobbying association to counter efforts by federal regulators to strap new rules to their industry. 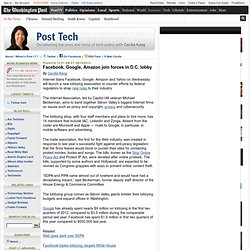 The Internet Association, led by Capitol Hill veteran Michael Beckerman, aims to band together Silicon Valley's biggest Internet firms on issues such as piracy and copyright, privacy and cybersecurity. The lobbying shop, with four staff members and plans to hire more, has 14 members that include IAC, LinkedIn and Zynga. The trade association, the first for the Web industry, was created in response to last year’s successful fight against anti-piracy legislation that the firms feared would block or punish their sites for containing pirated movies, books and songs. “SOPA and PIPA came almost out of nowhere and would have had a devastating impact,” said Beckerman, former deputy staff director of the House Energy & Commerce Committee. Why SOPA is on the Congress Agenda.