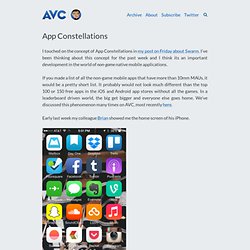 I’ve been thinking about this concept for the past week and I think its an important development in the world of non-game native mobile applications. If you made a list of all the non-game mobile apps that have more than 10mm MAUs, it would be a pretty short list. It probably would not look much different than the top 100 or 150 free apps in the iOS and Android app stores without all the games.

Mobile app startups are failing like it’s 1999. Stop the madness The long cycle times for developing mobile apps have led to startup failures that look more like 1999 – it’s like we’ve forgotten all the agile and rapid iteration stuff that we learned over the last 10 years. 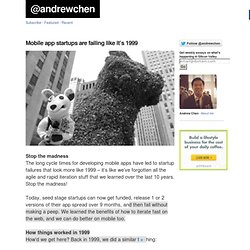 Stop the madness! Today, seed stage startups can now get funded, release 1 or 2 versions of their app spread over 9 months, and then fail without making a peep. We learned the benefits of how to iterate fast on the web, and we can do better on mobile too. How things worked in 1999 How’d we get here? Back in 1999, we did a similar thing: Raise millions in funding with an idea and impressive foundersSpend 9 months building up a productLaunch with much PR fanfareFail to hit product/market fitRelaunch with version 2.0, 6 months laterRepeat until you run out of money. 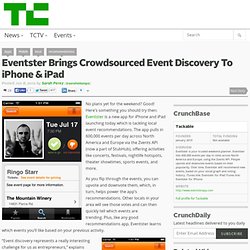 Good! Here’s something you should try then: Eventster is a new app for iPhone and iPad launching today which is tackling local event recommendations. The app pulls in 600,000 events per day across North America and Europe via the Zvents API (now a part of StubHub), offering activities like concerts, festivals, nightlife hotspots, theater showtimes, sports events, and more. As you flip through the events, you can upvote and downvote them, which, in turn, helps power the app’s recommendations. Other locals in your area will see those votes and can then quickly tell which events are trending. “Event discovery represents a really interesting challenge for us as entrepreneurs,” explains Tackable co-founder Luke Stangel, who helped create Eventster.

To use the app, you first sign in with Facebook, and then you can browse through the “popular” section or do a more advanced keyword search. Eventster is live in iTunes here: iPhone or iPad. With Help From Facebook Timeline, Viddy Becomes Top Free iPhone App. With the skyrocketing popularity and billion-dollar sale of Instagram, there’s an ongoing race to apply Instagram’s wildly successful photo sharing model to mobile video. 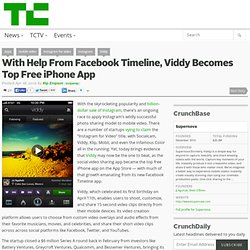 There are a number of startups vying to claim the “Instagram for Video” title, with Socialcam, Viddy, Klip, Mobli, and even the infamous Color all in the running. Yet, today brings evidence that Viddy may now be the one to beat, as the social video sharing app became the top free iPhone app on the App Store — with much of that growth emanating from its new Facebook Timeline app.

Pair. Yoke. Draw Something hits mobile game record as it passes 50M downloads. Draw Something, the Pictionary-style app that Zynga acquired with its $180 million purchase of OMGPOP, has surpassed 50 million downloads. 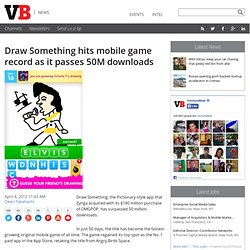 In just 50 days, the title has become the fastest-growing original mobile game of all time. The game regained its top spot as the No. 1 paid app in the App Store, retaking the title from Angry Birds Space. More than 6 billion drawings have been created. "I'm Getting Arrested" App for Immigrants.

Arizona's passage of SB 1070, a law that made it a crime to be an undocumented immigrant, has heightened the state's culture of fear, especially among immigrants. 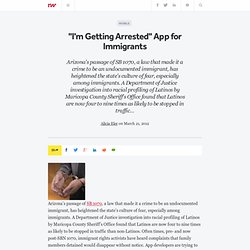 A Department of Justice investigation into racial profiling of Latinos by Maricopa County Sheriff's Office found that Latinos are now four to nine times as likely to be stopped in traffic than non-Latinos. Often times, pre- and now post-SBN 1070, immigrant rights activists have heard complaints that family members detained would disappear without notice. App developers are trying to fix that with "eAPP," the Emergency Alert and Personal Protection App. Do@ reinvents the mobile search experience. As a company, Do@ launched in March 2010 in San Francisco, but today at Tech Crunch Disrupt, the company has officially launched its product: the ultimate mobile search experience. 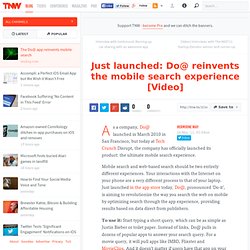 Mobile search and web-based search should be two entirely different experiences. Your interactions with the Internet on your phone are a very different process to that of your laptop. Just launched in the app store today, Do@, pronounced ‘Do-it’, is aiming to revolutionize the way you search the web on mobile by optimizing search through the app experience, providing results based on data direct from publishers. To use it: Start typing a short query, which can be as simple as Justin Bieber or toilet paper. Instead of links, Do@ pulls in dozens of popular apps to answer your search query. Search results are presented based on the ranking engine Social Radar, which lets users “heart” an app so that it appears closer to the top in search results. Color. Google Tried To Buy Color For $200 Million. Color Said No. Instagram + Color = Instacolor. If photo sharing apps Instagram and Color would mate and have a baby, it would likely look something like the Instacolor app made by tinkerer Rakshith Krishnappa. 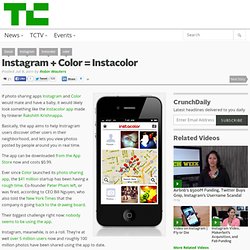 No Check-Ins Needed. Shopkick Sends You Deals From Your Couch: Tech News and Analysis « Shopkick is taking its audio check-in technology to television in a new deal with the CW that will allow Shopkick users to unlock exclusive deals when they use their app during certain commercials. 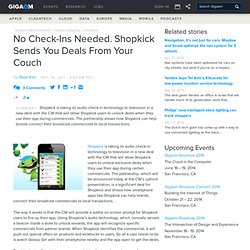 The partnership, which will be announced today at the CW’s upfront presentation, is a significant deal for Shopkick and shows how smartphone apps like Shopkick can help brands connect their broadcast commercials to local transactions. The way it works is that the CW will provide a subtle on-screen prompt for Shopkick users to fire up their app.

Using Shopkick’s audio technology, which normally senses a beacon inside a store to unlock rewards, the app will recognize specific commercials from partner brands. When Shopkick identifies the commercial, it will push out special offers on products and kickbucks to users. So all a user needs to do is watch Gossip Girl with their smartphone nearby and the app open to get the deals.