Julian Charriere. 16 Emerging Artists to Watch in 2016. Deaf since birth, 35-year-old Kim started her career as a painter, but a 2008 residency in Berlin exposed the artist to what was, at the time, a wealth of sound art being exhibited in the city. 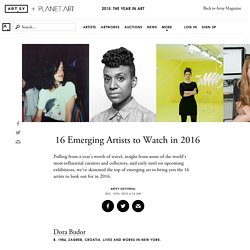 She had found her medium. In the time since, Kim’s work has been shown in MoMA’s 2013 exhibition, “Soundings,” and at the New Museum. This fall, two versions of her piece, Game of Skill, are on view in both “Greater New York” and an inaugural exhibition with London gallery Carroll / Fletcher. The piece involves walking while holding a specially conceived device up to a strip of velcro suspended from the ceiling.

When moving at just the right pace, the device plays a recording of Kim’s voice; otherwise, abstract noise is emitted. Much of Kim’s work centers on the social currency ascribed to sound—how creating sound allows us to make our presence felt in both positive and negative ways. Digital Art: Beyond The Hype – iGNANT.de. If you think of the term ‘digital art’, you might conjure up images of twitchy GIFs or glitchy videos. 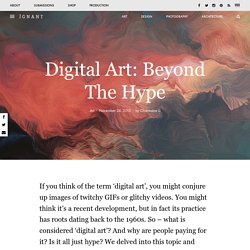 You might think it’s a recent development, but in fact its practice has roots dating back to the 1960s. So – what is considered ‘digital art’? And why are people paying for it? Is it all just hype? We delved into this topic and spoke to some key artists and gallerists about what it means to create, consume and sell digital art… While digital technologies touch on almost every aspect of our lives, digital art belonged predominantly to hacktivists and nerds until recently. ‘Myth’ is a film created as a way to interact and build upon the music created by Livyatanim. New sound installation by Adam Basenta - "Message Past Future" "Crystallized Skins" is an online collection of 3D object by international video artists. Alexandre on Instagram: “Joanie Lemercier - Blueprint (2015)” Ryuichi Sakamoto and Alva Noto collaborate on The Revenant score. Postgram – A bot for 'human storytelling' / by @concigliery at @ecal_ch. Created by Sebastian Vargas at ECAL (Bachelor Media & Interaction Design), Postgram is a bot for ‘human storytelling’ that explores issues of public data, privacy and image making using a process of “fair hack” to develop a story narrative. 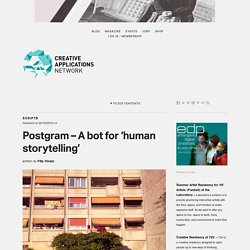 It speculate about the social network behaviour and search for new possibilities for film content. Using @post.gram instagram account: each time a photo is published, the bot use the geolocalisation data to seek for someone living around using a public directory. Once someone is found, is automatically added as a new contact in Sebastian’s phone and then sends him/her a printed postcard of the image. New contacts are then called to notify them about the postcard and a proposal to meet and film the encounter. The meeting is filmed, stories told, narratives discovered. Abstract Ecologies – A Conversation with Amber Christensen (@ambynambypamby) → “There Should be Gardens” is the title of the 14th edition of InterAccess’s Emerging Artists Exhibition. 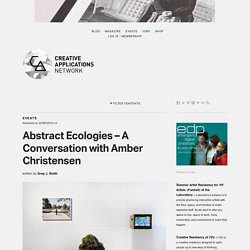 Drawing on her research in feminist/queer curatorial and media arts practices, the exhibition is curated by Toronto’s Amber Christensen and showcases five Canadian early career artists whose practices address “the interconnectedness of technologies, ecologies, botanies, gender and the cosmos.” In aggregate the show’s selected works invoke elemental qualities, amplify and abstract natural materialities, and offer different modes of seeing and engaging the world. 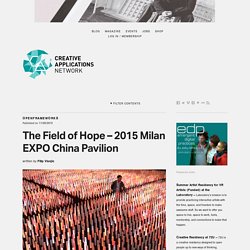 It consists of 30,000 metal “straws”, each with a LED diffuser tip, functioning as a 3-dimensional pixel display field. The installation provides visitors with two perspectives of the installation; First person – a descending slope at the entrance leads visitor to gradually merge into the “field”. As visitors descend into the field the relative heights of the plants grow up representing the season changes. Third Person – visitors walk up through an ascending ramp to the panorama platform at the second floor. With a broad view of the field from above, the blinking pixels can be seen together as an entire image rendering China’s landscapes. The project was created using openFrameworks, using a custom developed parametric design simulation engine. "VAULTII" is from @CUCCURUCU that explores the effects of movement with capture technology. "Skin Deep" by Rosalie Yu & @animishmish is a form of collaborative drawing with digital art http:/… 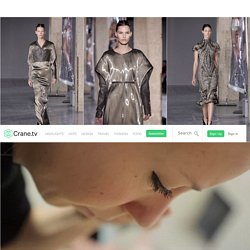 With a strong focus on materials, textures and technologies, Iris van Herpen’s designs are a feast for the senses, making heads turn at Paris Fashion Week. Experimenting with a wide range of new material and printing technologies the likes of 3D printing, 'dragon skin' laser cutting, magnetic dresses and musical dresses, Herpen pushes the boundaries of fashion design. She focusses on the creation and the story behind the garment rather than the practical garment as a whole, collaborating with artists and sometimes scientists in order to transform materials into her fascinating creations. 404 - Langen Foundation. Hiroaki Umeda - 'Intensional Particle' at Maison Des Arts... » jamie drouin & lance austin olsen – sometimes we all disappear - infinite grain. Composition is often understood as a process of adding, mutating and organizing sounds, but with artists like James Drouin and Lance Austin Olsen is demonstrated that it is also an art of dispensing, dissolving and reducing elements. 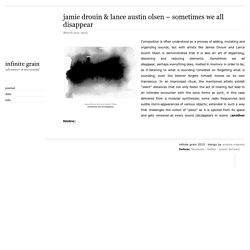 Sometimes we all disappear, perhaps everything does, melted in memory in order to be, as if listening to what is sounding consisted on forgetting what is sounding; even the listener forgets himself, moves on its own transience. This Light Art and Dance Duet Redefines "Electrifying" GIFS by Becky Chung N 4.0 is a stellar example of choreography married with technology, in the vein of Adrien M/Claire B’s digital dream world and PrinceMio’s Kandinsky-inspired coded breakdancing. 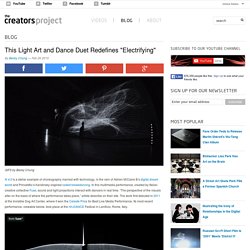 In this multimedia performance, created by Italian creative collective Fuse, sound and light projections interact with dancers in real time. Ryoji Ikeda to bring his "immersive club show" to London. The revered composer and sonic artist is plotting a huge audiovisual experience. 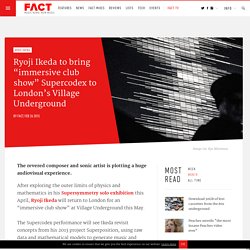 After exploring the outer limits of physics and mathematics in his Supersymmetry solo exhibition this April, Ryoji Ikeda will return to London for an “immersive club show” at Village Underground this May. The Supercodex performance will see Ikeda revisit concepts from his 2013 project Superposition, using raw data and mathematical models to generate music and projections while combining digital blips and bass drones with techno propulsion. #EliassonFLV - Olafur Eliasson. A magazine about emerging trajectories in art, science, and technology. Digital Painting No.10. Bright Matter – A group show exploring light, space, and perception. Illusive rear-projections, flickering moirés, fluorescent puzzle boxes: opening this Friday, November 21st, at Muriel Guépin Gallery in New York City is ‘Bright Matter’, a dazzling group show that’ll bend, warp and (if only briefly) break the way we see. 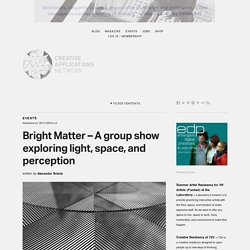 Curated by artist Joanie Lemercier (FR) and produced by Juliette Bibasse (FR), ‘Bright Matter’ presents a selection of enigmatic works by five international artists widely recognized for their spatial-aesthetic research, creative engineering, and stunning perceptual hacks. This art project lets anyone paint with brainwaves. Images via This is what a brainwave painting in motion looks like. For a series of abstract, Pollock-esque works, sixteen individuals with disabilities each filled a balloon with a paint color of their choice, donned an EEG headset, and burst the balloon with their thoughts. With Mind Art, Shanghai-based artist Jody Xiong wanted to show that the power of the mind could trump the body's limitations.

Superposition—5.84 Quintillion Facets of the Digital Sublime. This past Saturday Ryoji Ikeda presented the North American premiere of superposition to a crowd of several hundred at the Musée d’art Contemporain de Montréal (MAC). As would be expected, the sixty-five minute multiscreen performance played out as kind of a data aesthetics megamix that flashed through a series of precisely choreographed abstract visual vignettes that grappled with the digital sublime and pondered the agnosticism of network culture. However, what was a pleasant surprise—one welcomed with open arms, in fact—was the integration of the talents of two ‘imperfect’ human performers centre stage into the middle of Ikeda’s austere audiovisual animations. Network cosmology, collections of scientific visualizations, pans across satellite imagery—the content of the visuals was totalizing. Robert Henke - Atom Document - [diagonal] Light Barrier - Millions of calibrated light beams create floating phantoms in the air.

Created by Kimchi and Chips and commissioned by FutureEverything and the British Council, Light Barrier is the latest installation by Seoul based duo consisting of Elliot Woods and Mimi Son. First shown at New Media Night Festival, Nikola-Lenivets Park (4–6 June 2014), the installation creates phantoms of light in the air by crossing millions of calibrated beams; creating floating graphic objects which animate through space. A fascination with natural light drove the technique of the impressionist painters, they explored new qualities of colour and the trail of time. Kimchi and Chips’ study of digital light discusses a new visual mechanic, their installation adding to the visual language of space and light. As the artist’s inquiry deepens, brush strokes become descriptive like code, detailing reality and allying light with canvas. Elliot and Mimi created a system that creates truly volumetric projections which can define 3-dimensional forms in space. Virtual Depictions: San Francisco / Public Art Project.

Panther is a gallery, filled with gallery-like stuff: artwork, windows, benches and “no touching” signs. Not that the signs are needed. This world, in all its dimensionality, lives solely on the internet as a digital exhibition space. Field of Hope - Theme Installation of China Pavilion at Milan EXPO 2015. Nouveau Monde DDB invente 2015. REIFY 2015. Ryoji Ikeda to bring his "immersive club show" to London. Instructables. FIELD.