Leading Renewable Energy Solutions Provider - Amplus Solar. Energy Saving Tips. Saving energy is not only beneficial for the environment but for your pocket as well. 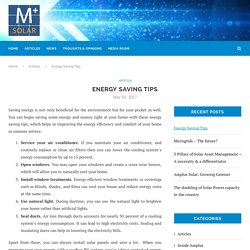 You can begin saving some energy and money right at your home with these energy saving tips, which helps in improving the energy efficiency and comfort of your home as summer arrives: Service your air conditioner. If you maintain your air conditioner, and routinely replace or clean air filters then you can lower the cooling system’s energy consumption by up to 15 percent.Open windows. You may open your windows and create a cross-wise breeze, which will allow you to naturally cool your home.Install window treatments. 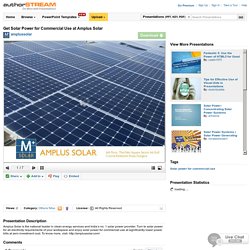 Amplus is a portfolio company of I Squared Capital one of India’s leading solar developers. We are a leader in providing DISTRIBUTED SOLAR AND ENERGY SOLUTIONS to INDUSTRIAL AND COMMERCIAL CUSTOMERS in India. AMPLUS SOLAR TO ACHIEVE 100 MW CONTRACTED CAPACITY Amplus Solar , believes that with huge capacity additions India will be on-track to become largest market after China and the US. HOW WAS 2016 FOR INDIA'S SOLAR SECTOR? AMPLUS VIEWS ON THE OUTLOOK OF 2017 The thrust for solar will continue in 2017, and in fact, this year would witness India’s entry to the list of largest solar markets in the world. AMPLUS IN 2017 AMPLUS was one of the lowest bidders in a SECI tender last year Rs 3/ unit for Uttarakhand , Himachal Pradesh and Puducherry Karnataka , Madhya Pradesh and Maharashtra will get solar power at Rs 5.56 per unit. Slide7: One of the Best Solar Energy Companies - Amplus Solar. Solar Panels for Businesses - Amplus Solar. Microgrids – The future? Microgrids are the groups of energy resources, both renewable and/or conventional, located and interconnected in a specific physical area that appears as a single entity to the alternating-current (AC) electric grid. 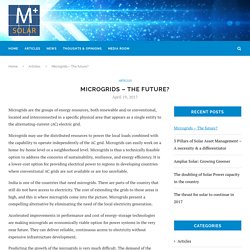 Microgrids may use the distributed resources to power the local loads combined with the capability to operate independently of the AC grid. Microgrids can easily work on a home-by-home level or a neighborhood level. Microgrids is thus a technically feasible option to address the concerns of sustainability, resilience, and energy efficiency. It is a lower-cost option for providing electrical power to regions in developing countries where conventional AC grids are not available or are too unreliable.

India is one of the countries that need microgrids. Accelerated improvements in performance and cost of energy-storage technologies are making microgrids an economically viable option for power systems in the very near future. Amplus Solar: Growing Greener. Going green is something that we should all look forward to. 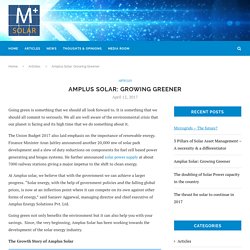 It is something that we should all commit to seriously. We all are well aware of the environmental crisis that our planet is facing and its high time that we do something about it. The Union Budget 2017 also laid emphasis on the importance of renewable energy. Finance Minister Arun Jaitley announced another 20,000 mw of solar park development and a slew of duty reductions on components for fuel cell based power generating and biogas systems. He further announced solar power supply at about 7000 railway stations giving a major impetus to the shift to clean energy. At Amplus solar, we believe that with the government we can achieve a larger progress. Going green not only benefits the environment but it can also help you with your savings. The doubling of Solar Power capacity in the country. The Cabinet committee on economic affairs approved the doubling of the solar power capacity in the country to 40 GW from 20 GW at present. 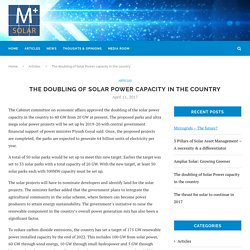 The proposed parks and ultra mega solar power projects will be set up by 2019-20 with central government financial support of power minister Piyush Goyal said. Once, the proposed projects are completed, the parks are expected to generate 64 billion units of electricity per year. A total of 50 solar parks would be set up to meet this new target. Earlier the target was set to 33 solar parks with a total capacity of 20 GW. With the new target, at least 50 solar parks each with 500MW capacity must be set up. The solar projects will have to nominate developers and identify land for the solar projects. To reduce carbon dioxide emissions, the country has set a target of 175 GW renewable power installed capacity by the end of 2022. Leading Solar Power Generation Company - Amplus Solar. 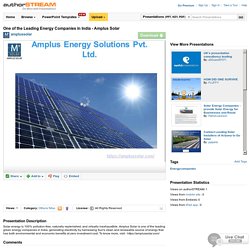 Ltd. About Us : About Us Amplus Solar - Partner for a GREENER World Amplus Solar is India’s largest dedicated distributed solar power company , run by veterans of the power industry with significant experience of developing, constructing, and operating power plants that have end to end in-house capabilities across all aspects – including Design, Engineering, Procurement, Construction, Monitoring and Maintenance. Our Business: Our Business Install your own Solar Plant with ZERO Investment. SPAAS Business Model: SPAAS Business Model Amplus Solar works on a unique Solar Power As a Service (or SPAAS) business model that aims to alleviate these worries by changing the way commercial and industrial solar consumers pay for solar delivering long term commercial savings and contributing significantly towards environmental sustainability.

The solar power energy industry is growing at a fast pace. 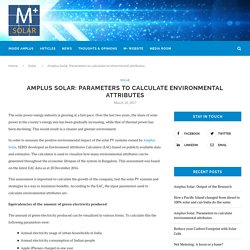 Over the last two years, the share of solar power in the county’s energy mix has been gradually increasing, while that of thermal power has been declining. This would result in a cleaner and greener environment. In order to measure the positive environmental impact of the solar PV systems owned by Amplus Solar, SERIS developed an Environment Attributes Calculator (EAC) based on publicly available data and estimates. The calculator is used to visualize how many environmental attributes can be generated throughout the economic lifespan of the system in Bangalore. This assessment was based on the latest EAC data as at 20 December 2016. This assessment is important to calculate the growth of the company, test the solar PV systems and strategize in a way to maximize benefits. Equivalencies of the amount of green electricity produced The amount of green electricity produced can be visualized in various forms.

Our activities have affected our environment adversely. 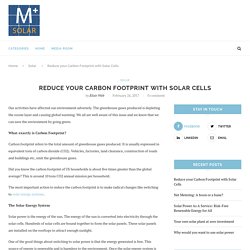 The greenhouse gases produced is depleting the ozone layer and causing global warming. We all are well aware of this issue and we know that we can save the environment by going green. What exactly is Carbon Footprint? Carbon footprint refers to the total amount of greenhouse gases produced. It is usually expressed in equivalent tons of carbon dioxide (CO2). Did you know the carbon footprint of US households is about five times greater than the global average? The most important action to reduce the carbon footprint is to make radical changes like switching to solar energy systems. Amplus Solar, Lighting your Lives – Amplus Knowledge Center. Climate changes are one of the key scenarios that we are facing as of now. 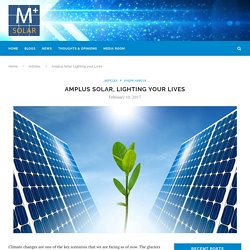 The glaciers are melting, sea levels are rising, and the pollution level is increasing. The main reason causing this scenario is the reliance of the world on the fossil fuels and its increasing consumption. The issue of climate change will also be resolved when the issue of energy is solved. Future economic growth depends on the long-term availability of the energy from natural and accessible sources. Solar Energy: The Key to Unlimited Power – Amplus Knowledge Center. Sun has been the ultimate source of light and energy. 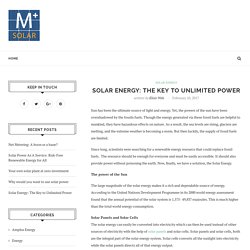 Yet, the powers of the sun have been overshadowed by the fossils fuels. Though the energy generated via these fossil fuels are helpful to mankind, they have hazardous effects on nature. As a result, the sea levels are rising, glaciers are melting, and the extreme weather is becoming a norm. But then luckily, the supply of fossil fuels are limited. Since long, scientists were searching for a renewable energy resource that could replace fossil fuels. Why would you want to use solar power – Amplus Knowledge Center. Solar energy has gained a lot of popularity recently. It is a renewable source of energy and does not have any harmful effects on the environment. People around the world, especially the large industries are opting to install the solar panel systems on their roofs to take advantage of this form of energy.

The question that arises is why should you go solar? Will it be beneficial for you? Here are some of the reasons why you should switch to solar power from traditional electricity. It deals with Environmental issues Solar power does not produce any harmful emissions that hurt the environment. Your own solar plant at zero investment – Amplus Knowledge Center. It’s high time that we realize the need to go solar. The concentration of greenhouse gasses in the atmosphere has increased considerably causing damage to the environment and affecting the health of living organisms. The main contributors to this are the large industries whose consumption of electricity is really high. Leading Commercial Solar Installation Company - Amplus Solar. Leading Green Energy Solutions Provider - Amplus Solar. Welcome To Amplussolar. Leading Solar Energy Companies in India - Amplus Solar.