I am social media expert and share some thing different on daily basis for you information and entertainment. 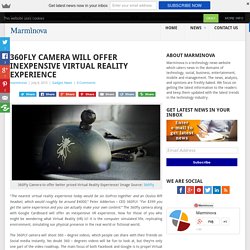 “For $399 you get the same experience and you can actually make your own content.” The 360fly camera along with Google Cardboard will offer an inexpensive VR experience. Now for those of you who might be wondering what Virtual Reality (VR) is? It is the computer simulated life, replicating environment, simulating our physical presence in the real world or fictional world. The 360FLY camera will shoot 360 – degree videos, which people can share with their friends on Social media instantly. If you think creating 360 – degrees video is cheap and easy. The true HQ videos for VR require specially designed camera rigs, with many lenses covering the 360 – degrees. “GoPro’s done a good job,” 360fly’s CEO Peter Adderton told Mashable.

The super thin CST-01 Watch Faces Production Issues. Manus Machina: Gaming Gloves’s kit version to be ready later this year! Streamlining of Virtual Reality is the main focus of many of the Gaming leaders today, different famous names are developing the supporting accessories, ranging from Facebook’s Oculus Rift to Microsoft Hololens and many others. 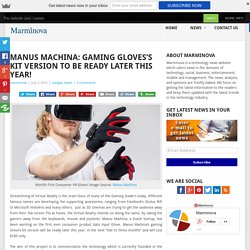 Just as 3D cinemas are trying to get the audience away from their flat screen TVs at home, the Virtual Reality intends on doing the same, by taking the gamers away from the keyboards, mouse and joysticks. Manus Machina; a Dutch startup, has been working on the first ever consumer product data input Glove. Manus Machina’s gaming Glove’s kit version will be ready later this year, in the next “two to three months” and will cost $280 only. The aim of this project is to commercialize the technology which is currently founded in the scientific research projects of different institutes.

The cost factor has to be reduced significantly, while the research institutes can afford a 10,000 dollar glove, a normal average gaming enthusiast would not amount to much. Sony launched First Flight For Crowdfunding. Facebook changed its Logo. A true dungeon crawling sequel, The Bards Tale IV! Google Self Driving Car Prototypes- Painting The Town. News Lab- Google Will now teach Media Houses. 360fly camera: GoPro of 360 degree videos! 360Fly Camera- GoPro of 360 degree videos / Image Source: 360Fly Inc Who anticipated that a single camera less than the size of a tennis ball would shoot 360-degree videos? 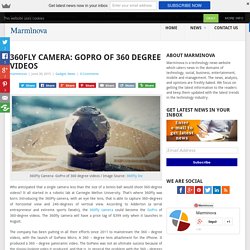 It all started in a robotic lab at Carnegie Mellon University. That’s where 360Fly was born. Introducing the 360Fly camera, with an eye like lens, that is able to capture 360–degrees of horizontal view and 240–degrees of vertical view. According to Adderton (a serial entrepreneur and extreme sports fanatic), the 360fly camera could become the GoPro of 360-degree videos. The company has been putting in all their efforts since 2011 to mainstream the 360 – degree videos, with the launch of GoPano Micro; A 360 – degree lens attachment for the iPhone. 360fly -Shoot Share Swipe/ Image Source: 360Fly Inc It shoots with an f-stop of 2.5, at a resolution of 1,504 x 1,504 and 30fps. 5G networks: 200 times faster than 4G. Reserve Strap Promise- Apple Watch Battery To Be Extended. Facebook’s New Signup Ads- Happy News For The Marketers. Marminova news. Google Wants Testers For Jump VR Video Cameras.

Casual studios first project: puzzle game. Goodgame Studios has shown their hold in the free to play market, focusing on the games for mobile and browser, with a total of 10 games in 25 languages and a registered user base of 260 million. 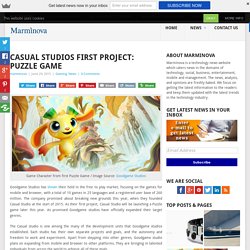 The company promised about breaking new grounds this year, when they founded Casual Studio at the start of 2015. As their first project, Casual Studio will be launching a Puzzle game later this year. As promised Goodgame studios have officially expanded their target genres. The Casual studio is one among the many of the development units that Goodgame studios established. Each studio has their own separate projects and goals, and the autonomy and freedom to work and experiment. “We are pleased to see that the restructuring of our game development units is proving fruitful and that we will be able to launch our first casual game this year. The Casual Studio has more exciting projects in the process. The puzzle game will be available for smartphones, tablets and Facebook. Like this: marminova.