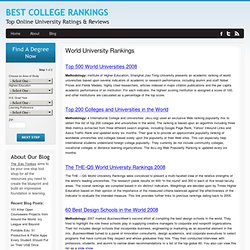 For each indicator, the highest scoring institution is assigned a score of 100, and other institutions are calculated as a percentage of the top score. Top 200 Colleges and Universities in the World Methodology: 4 International College and Universities’ (4icu.org) used an exclusive Web ranking popularity mix to obtain this list of top 200 colleges and universities in the world. The ranking is based upon an algorithm including three Web metrics extracted from three different search engines, including Google Page Rank, Yahoo! Interior Design School Rankings - ArtSchools.com. Expand your options or narrow interior design program search with the aid of professional research and rankings. 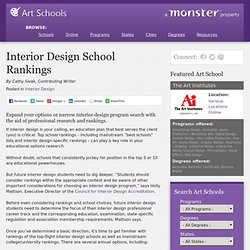 If interior design is your calling, an education plan that best serves the client (you) is critical. Top school rankings – including mainstream “best schools” lists and interior design-specific rankings – can play a key role in your educational options research. Without doubt, schools that consistently jockey for position in the top 5 or 10 are educational powerhouses. But future interior design students need to dig deeper.

“Students should consider rankings within the appropriate context and be aware of other important considerations for choosing an interior design program,” says Holly Mattson, Executive Director of the Council for Interior Design Accreditation. Once you’ve determined a basic direction, it’s time to get familiar with rankings of the top-flight interior design schools as well as mainstream college/university rankings. Processing Primer. America's Best Interior Design Schools 2014. Blog About Infographics and Data Visualization - Cool Infographics. The Sage Hill School has created an infographic as a marketing piece showing many of the different stats about the school’s history and performance. 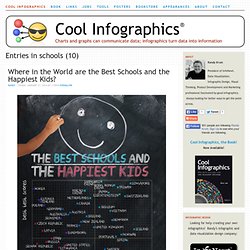 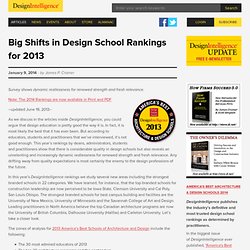 Note: The 2014 Rankings are now available in Print and PDF --updated June 19, 2013-- As we discuss in the articles inside DesignIntelligence, you could argue that design education is pretty good the way it is. In fact, it is most likely the best that it has ever been. But according to educators, students and practitioners that we’ve interviewed, it’s not good enough. The World's 25 Best Design Schools. Flickr/bluekdesign As we enter the golden age of design in startups, highly talented user-interface and product designers are becoming ever more important. 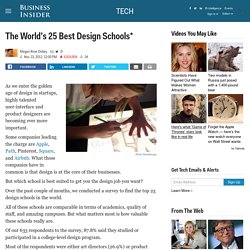 Some companies leading the charge are Apple, Path, Pinterest, Square, and Airbnb. What those companies have in common is that design is at the core of their businesses. Ranking methodology: How are universities ranked? - UniversityRankings.ch / Methodology/ On University Rankings. Very different ranking approaches There are major differences in the ranking methodologies used. 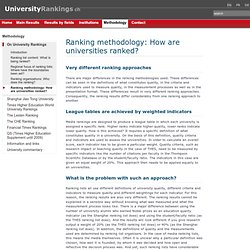 These differences can be seen in the definitions of what constitutes quality, in the criteria and indicators used to measure quality, in the measurement processes as well as in the presentation format. These differences result in very different ranking approaches. Consequently, the ranking results differ considerably from one ranking approach to another. League tables are achieved by weighted indicators Media rankings are designed to produce a league table in which each university is assigned a specific rank. World University Rankings 2013-2014 methodology - Times Higher Education.

The essential elements in our world-leading formula Underpinning the World University Rankings is a sophisticated exercise in information-gathering and analysis: here we detail the criteria used to assess the global academy's greatest universities The Times Higher Education World University Rankings 2013-2014 are the only global university performance tables to judge research-led universities across all their core missions - teaching, research, knowledge transfer and international outlook. 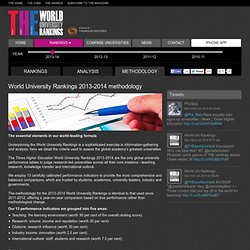 We employ 13 carefully calibrated performance indicators to provide the most comprehensive and balanced comparisons, which are trusted by students, academics, university leaders, industry and governments. The methodology for the 2013-2014 World University Rankings is identical to that used since 2011-2012, offering a year-on-year comparison based on true performance rather than methodological change. Our 13 performance indicators are grouped into five areas: This indicator is worth 6 per cent overall. US News Education - US News. How U.S. News Calculated the 2015 Best Colleges Rankings. The host of intangibles that makes up the college experience can't be measured by a series of data points. 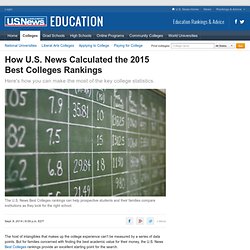 But for families concerned with finding the best academic value for their money, the U.S. News Best Colleges rankings provide an excellent starting point for the search. They allow you to compare at a glance the relative quality of institutions based on such widely accepted indicators of excellence as freshman retention and graduation rates and the strength of the faculty. And as you check out the data for colleges already on your short list, you may discover unfamiliar schools with similar metrics, and thus broaden your options. QS World University Rankings by Subject 2014 - Communication & Media Studies. QS World University Rankings: Methodology. The primary aim of the QS World University Rankings® is to help students make informed comparisons between their international study options. 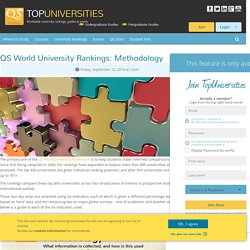 Since first being compiled in 2004, the rankings have expanded to feature more than 800 universities around the world, with far more (over 3,000) assessed. The top 400 universities are given individual ranking positions, and after this universities are placed within a group, starting from 401-410, up to 701+. The rankings compare these top 800 universities across four broad areas of interest to prospective students: research, teaching, employability and international outlook. These four key areas are assessed using six indicators, each of which is given a different percentage weighting (see below). Four of the indicators are based on ‘hard’ data, and the remaining two on major global surveys – one of academics and another of employers – each the largest of their kind. 1. 2. 3. 4. This indicator aims to assess universities’ research output. 5 & 6.