New places. Park Güell Barcelona. Specific conditions for group reservations: How long in advance can ticket reservations be made? 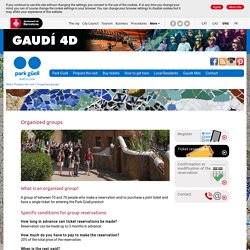 Reservation can be made up to 3 months in advance. How much do you have to pay to make the reservation? 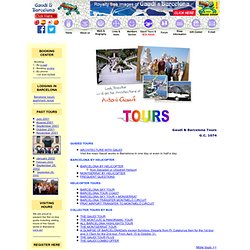 With a bit more planning, we can also arrange visits to other Gaudí works, such as Palau Güell, Finca Güell, or the Gaudí Crypt; talk to us about special arrangements. All tours include: • Personal attention • Expert guides in Gaudí's works• Comfortable coaches, mini-bus, taxi, limousine. Barcelona Travel Guide 2013 - Things to do in Barcelona. Barcelona. Barcelona (English /bɑrsɨˈloʊnə/, Catalan: [bərsəˈɫonə], Spanish: [barθeˈlona]) is the capital city of the autonomous community of Catalonia in Spain, and its 2nd largest city, with a population of 1.6 million[1] within its administrative limits. 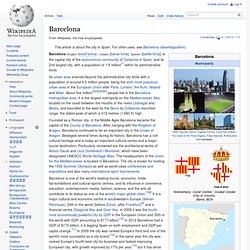 Founded as a Roman city, in the Middle Ages Barcelona became the capital of the County of Barcelona. After merging with the Kingdom of Aragon, Barcelona continued to be an important city in the Crown of Aragon. Besieged several times during its history, Barcelona has a rich cultural heritage and is today an important cultural centre and a major tourist destination. Particularly renowned are the architectural works of Antoni Gaudí and Lluís Domènech i Montaner, which have been designated UNESCO World Heritage Sites. Portal UPCommons: "Between the city and sea: urban waterfront regeneration" Barcelona's planning strategies: from 'Paris of the South' to the 'Capital of West Mediterranean' Planning strategies in Barcelona are linked to its capital city aspirations. 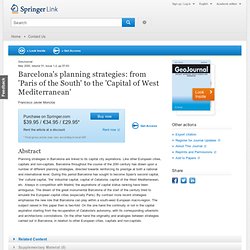 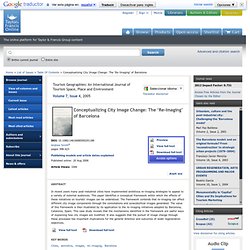 This paper identifies a conceptual framework within which the effects of these initiatives on tourists' images can be understood. The framework contends that re-imaging can affect different city image components through the connotations and synecdochical images generated. Barcelona’s Urban Landscape. Henry Stewart Publications - Article. ‘A Different and New Refinement’ Design in Barcelona, 1960–1990 Abstract This article seeks to highlight certain elements that helped configure the position of designer goods—and, by extension, design—as part of Barcelona's material culture between 1960 and 1990 It maps some of the ways in which the evolution of their provision defined how they were perceived and the modes of consumption associated with them, paying particular attention to the development of high-design retailing As different levels of provision and consumption interacted and coexisted, the cultural position of design took shape the notion of what 'design' was, where one could find it, how and by whom it was used or what it looked like, was defined and polished, collectively acknowledged. 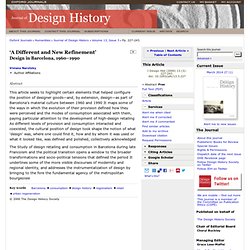 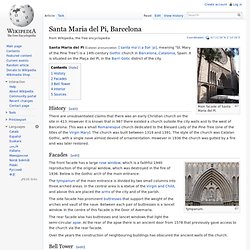 Santa Maria del Pi (Catalan pronunciation: [ˈsantə məˈɾi.ə ðəɫ ˈpi], meaning "St. Mary of the Pine Tree") is a 14th-century Gothic church in Barcelona, Catalonia, Spain. It is situated on the Plaça del Pi, in the Barri Gòtic district of the city. History[edit] There are unsubsantiated claims that there was an early Christian church on the site in 413. Facades[edit] Tympanum. Casa Vicens. Casa Vicens, Barcelona. 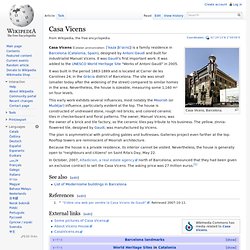 Casa Vicens (Catalan pronunciation: [ˈkazə βiˈsɛns]) is a family residence in Barcelona (Catalonia, Spain), designed by Antoni Gaudí and built for industrialist Manuel Vicens. It was Gaudí's first important work. It was added to the UNESCO World Heritage Site "Works of Antoni Gaudí" in 2005. Beaches and cycle of the water. The Magic Fountain was created by Carlos Buigas for the Universal Expo of 1929. 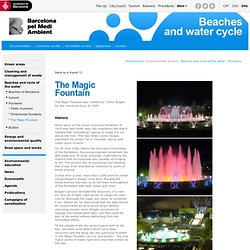 History When work on the Great Universal Exhibition of 1929 was well under way, the organizers felt that it needed that "something" special to made it a cut above the rest. That was when Carlos Buigas submitted his project for a "colossal, daring and costly piece of work". 1929 Barcelona International Exposition.

The previous 1888 Barcelona Universal Exposition had led to a great advance in the city's economic, architectural and technological growth and development, including the reconstruction of the Parc de la Ciutadella, the city's main public park. 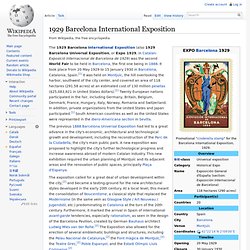 A new exposition was proposed to highlight the city's further technological progress and increase awareness abroad of modern Catalan industry. This new exhibition required the urban planning of Montjuïc and its adjacent areas and the renovation of public spaces, principally Plaça d'Espanya. Origin of the Exposition[edit] The idea of a new exhibition began to take shape in 1905, promoted by the architect Josep Puig i Cadafalch, as a way of bringing out the new Plan of links designed by Léon Jaussely. Palau Reial Major. Parc de la Ciutadella.

The main attraction has, from its establishment hitherto been the zoo. This was due to out of the 7,000 animals present the albino gorilla Snowflake, who has died in 2004. Near the zoo's entrance, the famous climbable gigantic stone mammoth is to be seen, just as the metallic cat in another perimeter of the park. Another yet to be mentioned conspicuous characteristic is the park's paths' layout, one half being made up by sinuous and rather natural seeming trails, and the other by direct and refined ones. Along both, huge a variety of vegetation is assertively displayed, having small signposts at their front, serving as name tags. Locations[edit] Montjuïc. Coordinates: Montjuïc (Catalan pronunciation: [muɲʒuˈik]; Spanish spelling Montjuich) is a hill in Barcelona, Catalonia, Spain. Etymology[edit] Description[edit] Barcelona Magic Fountain of Montjuïc. The magic fountain of Montjuïc's (Font màgica de Montjuïc in Catalan) first performance was on May 19, 1929 during the Great Universal Exhibition.

The designer Carles Buigas submitted his plans one year before the exhibition and many thought that the project was too ambitious to be created, let alone completed on time. Over 3000 workers were commissioned to work on the project and less than 1 year later the magic fountain was born. The magic fountain is a spectacular display of colour, light, motion, music and water acrobatics - if you mix all these elements together in just the right combinations, you end up with pure magic! The magic fountain is a "must see" when you come to Barcelona and highly recommended.

How to get to the magic fountain of Montjuïc Metro: Plaça Espanya (Green Line, L3) and (Red Line, L1) Barcelona metro map Opening Times: Time may change due to season, we advise you to check the time on the official Magic Fountain web site. Entertainment-what-to-do-in-barcelona. Casa Terrades or Casa de les Punxes Casa de les Punxes. 2004 Universal Forum of Cultures.