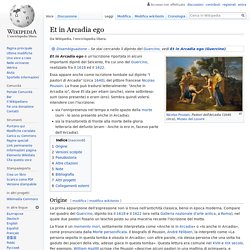 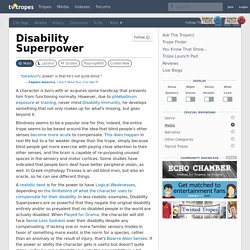 " A character is born with or acquires some handicap that prevents him from functioning normally. However, due to phlebotinum exposure or training, never mind Disability Immunity, he develops something that not only makes up for what's missing, but goes beyond it. Blindness seems to be a popular one for this. Indeed, the entire trope seems to be based around the idea that blind people's other senses become more acute to compensate. This does happen in real life but to a far weaker degree than the trope, simply because blind people get more exercise with paying close attention to their other senses, and the brain is capable of re-purposing unused spaces in the sensory and motor cortices.

A realistic twist is for the power to have Logical Weaknesses, depending on the limitations of what the character uses to compensate for their disability. Sub-Tropes: Duality Motif. Forgotten First Meeting. Many years ago, Alice and Bob met each other by random chance, and the meeting left a deep impression on at least one of them. 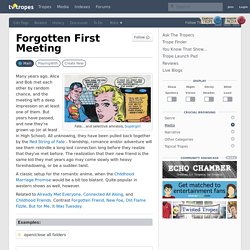 But years have passed, and now they're grown up (or at least in High School). All unknowing, they have been pulled back together by the Red String of Fate - friendship, romance and/or adventure will see them rekindle a long-lost connection long before they realize that they've met before. The realization that their new friend is the same kid they met years ago may come slowly with heavy foreshadowing, or be a sudden twist.

A classic setup for the romantic anime, when the Childhood Marriage Promise would be a bit too blatant. Quite popular in western shows as well, however. Fisher King. As within, so without. 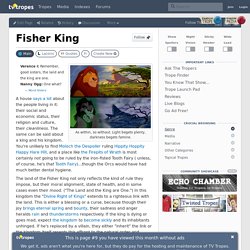 Light begets plenty, darkness begets famine. Verence I: Remember, good sisters, the land and the king are one. Astral Projection. "I'm not in my body right now, but if you'll leave a message... 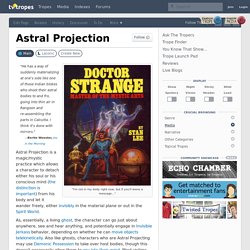 " "He has a way of suddenly materializing at one's side like one of those Indian blokes who shoot their astral bodies to and fro, going into thin air in Rangoon and re-assembling the parts in Calcutta. I think it's done with mirrors. " Astral Projection is a magic/mystic practice which allows a character to detach either his soul or his conscious mind (the distinction is important) from his body and let it wander freely, either invisibly in the material plane or out in the Spirit World. As, essentially, a living ghost, the character can go just about anywhere, see and hear anything, and potentially engage in Invisible Jerkass behavior, depending on whether he can move objects telekinetically.

Also like ghosts, characters who are Astral Projecting may use Demonic Possession to take over host bodies, though this doesn't necessarily allow them to pry into their mind. Open/close all folders Anime and Manga Comic Books Fan Works. A Chat with Satan. Seems trustworthy enough. 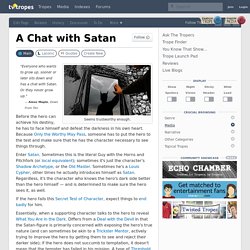 "Everyone who wants to grow up, sooner or later sits down and has a chat with Satan. Or they never grow up. " — Amos Maple, Down From Ten Before the hero can achieve his destiny, he has to face himself and defeat the darkness in his own heart. Because Only the Worthy May Pass, someone has to put the hero to the test and make sure that he has the character necessary to see things through. Enter Satan. If the hero fails this Secret Test of Character, expect things to end badly for him. Essentially, when a supporting character talks to the hero to reveal What You Are in the Dark. Mirrors Reflect Everything. "Mirrors and magic are like oil and water; they repel each other and can't mix. 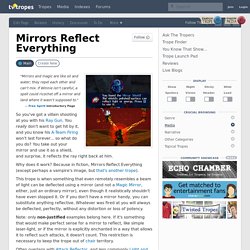 If Winnie isn't careful, a spell could ricochet off a mirror and land where it wasn't supposed to. " So you've got a villain shooting at you with his Ray Gun. You really don't want to get hit by it, and you know his A-Team Firing won't last forever... so what do you do? You take out your mirror and use it as a shield, and surprise, it reflects the ray right back at him.

Why does it work? An Astral Projection, Not a Ghost. A character who looks, feels, and talks like a ghost turns out to be a living person's out-of-body experience. 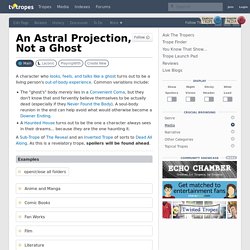 Common variations include: The "ghost's" body merely lies in a Convenient Coma, but they don't know that and fervently believe themselves to be actually dead (especially if they Never Found the Body). A soul-body reunion in the end can help avoid what would otherwise become a Downer Ending. A Haunted House turns out to be the one a character always sees in their dreams... because they are the one haunting it.

A Sub-Trope of The Reveal and an Inverted Trope of sorts to Dead All Along. Open/close all folders Anime and Manga. Glamour Failure. There are many things that go bump in the night, secure in the knowledge that their unholy powers can trick the human eye into blindness, allowing them to live among and prey on humanity with impunity. 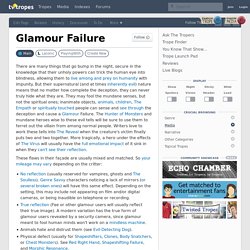 But their supernatural (and at times inherently evil) nature means that no matter how complete the deception, they can never truly hide what they are. They may fool the mundane senses, but not the spiritual ones; inanimate objects, animals, children, The Empath or spiritually touched people can sense and see through the deception and cause a Glamour Failure. The Hunter of Monsters and mundane heroes wise to these evil tells will be sure to use them to ferret out the villain from among normal people. Writers love to work these tells into The Reveal when the creature's victim finally puts two and two together. More tragically, a hero under the effects of The Virus will usually have the full emotional impact of it sink in when they can't see their reflection. open/close all folders Fan Works.