One issue with how we currently teach native histories is that we make it seem like they are an extinct group that no longer has issues or suffers because of this countries actions.

I included tolerance.org because they are a great resource for finding lessons plans but you have to make a free account to access them. Native voices, accurate history forge deeper, better understanding of American Indians in nation’s schools. By Amelia Fogarty Students access Native Knowledge 360° on-line learning materials during a classroom lesson. 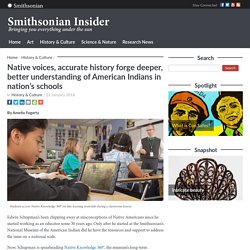 Edwin Schupman’s been chipping away at misconceptions of Native Americans since he started working as an educator some 30 years ago. Only after he started at the Smithsonian’s National Museum of the American Indian did he have the resources and support to address the issue on a national scale. Now, Schupman is spearheading Native Knowledge 360°, the museum’s long-term initiative to integrate the Native American experience into social studies, language arts and other curriculums in kindergarten through 12th-grade classrooms across the country. The museum is working with Native communities and educators nationally to achieve these goals. “It’s an audacious project because really, our end goal is to change the narrative of the Native American in America’s schools,” explains Schupman (Muscogee), who is the museum’s manager of national education. “I learn something all the time. Teachers, Do You Need Better Resources? You’re Not Alone: Native Knowledge 360° Is Here to Help. 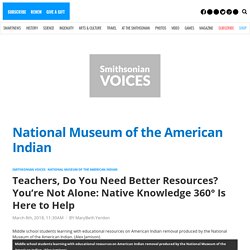 Textbooks, popular media, and prepackaged curricula typically offer minimal coverage and a single perspective on complex American Indian histories and cultures. These resources often relegate American Indians to the distant past and fail to illustrate the dynamic and diverse cultures of Native America. Likewise, when teachers lack quality sources on a topic, they are less likely to use rigorous pedagogies, such as inquiry. The museum's Teacher-in-Residence (TIR) Program helps teachers and teacher educators develop and refine their pedagogy and practice.

As educational stakeholders, we all have a responsibility to ensure that we honor the diverse histories and cultures that make up the complex fabric of the United States. Indian Law Resource Center. Native American Living Conditions on Reservations - Native American Aid. About 22% of our country’s 5.2 million Native Americans live on tribal lands (2010 U.S. 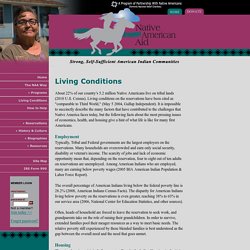 Census). Living conditions on the reservations have been cited as "comparable to Third World," (May 5 2004, Gallup Independent). It is impossible to succinctly describe the many factors that have contributed to the challenges that Native America faces today, but the following facts about the most pressing issues of economics, health, and housing give a hint of what life is like for many first Americans. Typically, Tribal and Federal governments are the largest employers on the reservations.

Many households are overcrowded and earn only social security, disability or veteran's income. The overall percentage of American Indians living below the federal poverty line is 28.2% (2008, American Indians Census Facts). Often, heads of household are forced to leave the reservation to seek work, and grandparents take on the role of raising their grandchildren. There is a housing crisis in Indian country. Native American injustice: how we ravaged the "savages". Decolonizing Thanksgiving: A Toolkit for Combatting Racism in Schools.

Resources for Educators and Families to Teach about Thanksgiving & Native Peoples in a Socially Responsible Way “Ten Ways to Make Your Thanksgiving about Social and Environmental Justice,” by Eve Bratman (2016). 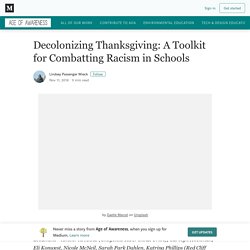 While some of her suggestions were specific to 2016, Bratman offers suggestions for individuals and families to change their holiday traditions to take action against racism, social injustice, and environmental degradation. I want to make this Thanksgiving more deeply anti-racist, ecologically rooted, and anti-imperialist…Repeating the holiday with no acknowledgement of the intolerance in its history feels delusional at best, if not actively perpetuating oppression. Teaching Tolerance, “Teaching Thanksgiving in a Socially Responsible Way,” by Amanda Morris (2015). Debating Cultural Appropriation - TeachRock.

In early 2014, Pharrell Williams was winning. 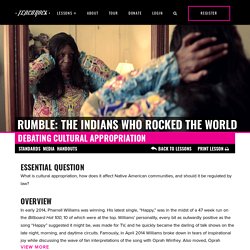 His latest single, “Happy,” was in the midst of a 47 week run on the Billboard Hot 100, 10 of which were at the top. Williams’ personality, every bit as outwardly positive as the song “Happy” suggested it might be, was made for TV, and he quickly became the darling of talk shows on the late night, morning, and daytime circuits. Famously, in April 2014 Williams broke down in tears of inspirational joy while discussing the wave of fan interpretations of the song with Oprah Winfrey. Also moved, Oprah suggested the song was so successful, “Because it came from such a clear space that the energy was absolutely uninterrupted by anything other than allowing it to flow from heart to heart.”

And then Williams posed on the cover of Elle UK magazine wearing a feathered war bonnet.