From the moment we pull up to your customer's door, our white fleet vehicle projects a professional image for your company. Customers feel secure allowing our technicians into their home and are confident their needs will be met the first time. 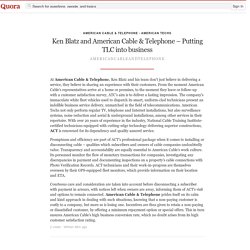 With over 20 years of experience in the cable industry, Ken Blatz of ACT understands the importance of connecting and creating lasting communication with people. 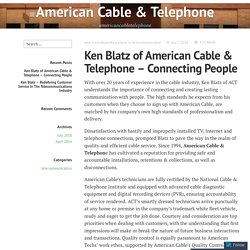 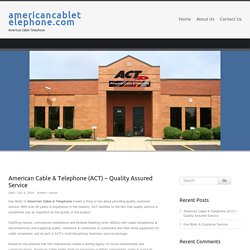 With over 20 years of experience in the industry, ACT testifies to the fact that quality service is sometimes just as important as the quality of the product. Outfitting homes, commercial installations and Multiple Dwelling Units (MDUs) with cable installations & disconnections and supplying audits, retentions & collections of customers and their rental equipment for cable companies, are all part of ACT’s multi-disciplinary business service package. Based on the premise that first impressions create a lasting legacy for future relationships and communications, American Cable prides itself on employing qualified, presentable, polite & punctual personnel to represent the company. Paired with the distinctive white fleet vehicles used to dispatch ACT technicians to a household or business place, cleanliness and efficiency are the hallmark of its enterprise. American Cable & Telephone (ACT) and its expansive reach. Customer service and satisfaction is at the forefront of ACT’s founding mission statement, which speaks to its commitment of delivering quality professional and reliable video, phone and internet coverage nationwide. 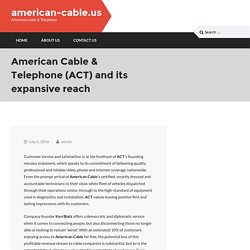 From the prompt arrival of American Cable’s certified, smartly dressed and accountable technicians to their clean white fleet of vehicles dispatched through their operations center, through to the high-standard of equipment used in diagnostics and installation, ACT values leaving positive first and lasting impressions with its customers. Company founder Ken Blatz offers a democratic and diplomatic service when it comes to connecting people, but also disconnecting those no longer able or looking to remain ‘wired’.

With an estimated 10% of customers enjoying access to American Cable for free, the potential loss of this profitable revenue stream to cable companies is substantial, but so is the potential fallout of losing such a sizeable percentage of customers. American Cable And Telephone - American Techs: Ken Blatz – The Importance of First Impressions. In any interaction, you only get one chance to make a first impression. 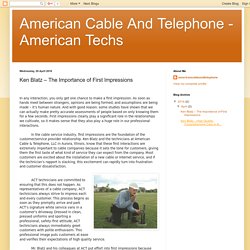 As soon as hands meet between strangers, opinions are being formed, and assumptions are being made – it’s human nature. And with good reason: some studies have shown that we can actually make pretty accurate assessments of people based on only knowing them for a few seconds. First impressions clearly play a significant role in the relationships we cultivate, so it makes sense that they also play a huge role in our professional interactions. In the cable service industry, first impressions are the foundation of the customer/service provider relationship. Ken Blatz and the technicians at American Cable & Telephone, LLC in Aurora, Illinois, know that these first interactions are extremely important to cable companies because it sets the tone for customers, giving them the first taste of what kind of service they can expect from the company. 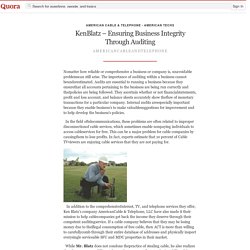 The importance of auditing within a business cannot beunderestimated. Audits are essential to running a business because they ensurethat all accounts pertaining to the business are being run correctly and thatpolicies are being followed. They ascertain whether or not financialstatements, profit and loss account, and balance sheets accurately show theflow of monetary transactions for a particular company.

Internal audits areespecially important because they enable business’s to make valuablesuggestions for improvement and to help develop the business’s policies. In the field oftelecommunications, these problems are often related to improper disconnectionof cable services, which sometimes enable nonpaying individuals to access cableservices for free. While Mr. Ken Blatz – Redefining Customer Service In The Telecommunications Industry – American Cable & Telephone.

Let’s be honest, telecommunication provider companies do not have the best reputation when it comes to customer service. 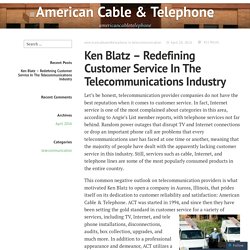 In fact, Internet service is one of the most complained about categories in this area, according to Angie’s List member reports, with telephone services not far behind. Random power outages that disrupt TV and Internet connections or drop an important phone call are problems that every telecommunications user has faced at one time or another, meaning that the majority of people have dealt with the apparently lacking customer service in this industry. Still, services such as cable, Internet, and telephone lines are some of the most popularly consumed products in the entire country.

The invention of the television has arguably had the most significant impact on contemporary American society. 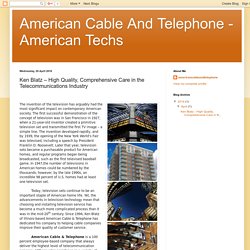 The first successful demonstration of the concept of television was in San Francisco in 1927, when a 21-year-old inventor created a primitive television set and transmitted the first TV image – a simple line. The invention developed rapidly, and by 1939, the opening of the New York World’s Fair was televised, including a speech by President Franklin D. Roosevelt. Later that year, television sets became a purchasable product for American homes, and regular programs began being broadcasted, such as the first televised baseball game. In 1947,the number of televisions in American homes could be numbered by the thousands; however, by the late 1990s, an incredible 98 percent of U.S. homes had at least one television set. Today, television sets continue to be an important staple of American home life.

As a locally-owned company, Mr.