I am an English editor in Fiberstore (www.fiberstore.com/). Fiberstore is a leading manufacturer and supplier of fiber optic subsystems, components and solutions. Want to know the newest and funniest information about fiber optical technology and products? Welcome in! You can also visit my personal blog at www.fiber-optical-networking.com/.

StumbleUpon. Delivering Gigabit Ethernet With G.fast. The demand for higher data rates is continuously increasing driven by the applications like Cloud Computing, Big Data and Internet of Things. 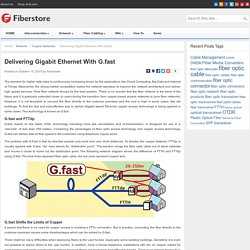 Meanwhile, the strong market competition makes the network operators to improve the network architecture and deliver high speed services. Pure fiber network should be the best solution. There is no wonder that the fiber network is the trend of the future and it is gradually extended closer to users during the transition from copper-based access networks to pure fiber networks. However, it is not favorable to connect the fiber directly to the customer premises and the cost is high in some cases, like old buildings. To find the fast and cost-effective way to deliver Gigabit speed Ethernet, copper access technology is being applied in some cases. Important Components for 40/100G Ethernet Migration. With the growth of bandwidth-intensive applications such as high-performance computing and business continuity, there emerge higher-speed networks of 40/100G Ethernet. 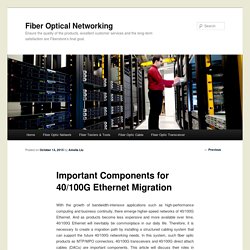 And as products become less expensive and more available over time, 40/100G Ethernet will inevitably be commonplace in our daily life. Therefore, it is necessary to create a migration path by installing a structured cabling system that can support the future 40/100G networking needs. In this system, such fiber optic products as MTP/MPO connectors, 40/100G transceivers and 40/100G direct attach cables (DACs) are important components. Digital Diagnostic Monitoring Introduction. Cisco announced the end of sale of its SFP transceiver Cisco GLC-SX-MM transceiver and published a replacement—Cisco GLC-SX-MMD transceiver. 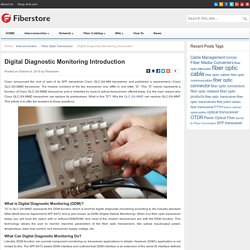 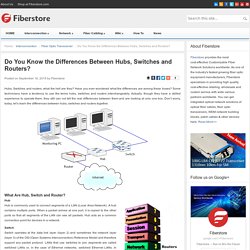 Have you ever wondered what the differences are among these boxes? Some technicians have a tendency to use the terms hubs, switches and routers interchangeably. Actually, though they have a skilled experience to operate them, they still can not tell the real differences between them and are looking at only one box. Don’t worry, today, let’s learn the differences between hubs, switches and routers together. What Are Hub, Switch and Router? Hub Hub is commonly used to connect segments of a LAN (Local Area Network). Switch Switch operates at the data link layer (layer 2) and sometimes the network layer (layer 3) of the OSI (Open Systems Interconnection) Reference Model and therefore support any packet protocol.

Router A router is connected to at least two networks, commonly two LANs or WANs (Wide Area Networks) or a LAN and its ISP.s (Internet Service Provider.s) network. Differences Between Hubs, Switches, and Routers on the Network. MTP/MPO Fiber Patch Cord Overview. A MTP/MPO fiber patch cord is a fiber optic cable capped at either end with MTP/MPO connectors, which can be connected to an optical switch, cable television (CATV) or other telecommunication equipment rapidly and conveniently. 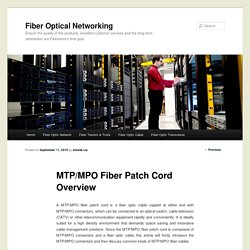 Things You Need to Know About MTP/MPO Harness Cable. OM3 and OM4 Fiber Patch Cables. Multi-mode fiber patch cable, which is composed of a fiber optic cable terminated with multi-mode fiber optic connectors at both ends, is a type of optical fiber mostly employed for communication over short distances, such as within a building or on the campus. 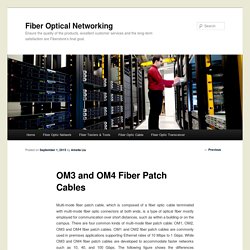 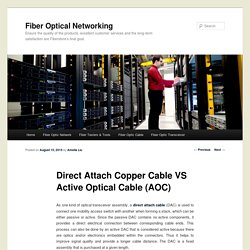 Since the passive DAC contains no active components, it provides a direct electrical connection between corresponding cable ends. This process can also be done by an active DAC that is considered active because there are optics and/or electronics embedded within the connectors. Best Practice for Fiber Cabling. How to Install Fiber Optic Connectors? Date Submission: September 8, 2015 By Jo Wang As we know, fiber optic patch cords are capped at both ends with fiber optic connectors to allow them to be rapidly and conveniently connected to telecommunication equipment. 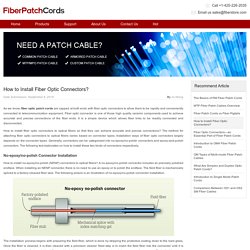 XFP Transceiver Overview. Defined by an industry group in 2002, XFP is a standard for transceivers used in high-speed computer network and telecommunication links that employ optical fiber. 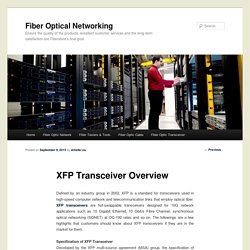 Important Components in DWDM System. Dense wavelength division multiplexing (DWDM) is one of the most recent and important technologies in the development of fiber optic transmission technology. 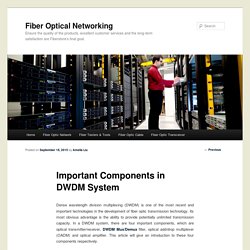 Its most obvious advantage is the ability to provide potentially unlimited transmission capacity. Technologies Used in Multiplexing. Sending email is a commonplace occurrence in our daily life. When you send an email to a friend in another city, it will firstly join up with other messages being transmitted in your city, and then get dropped off at the correct destination in the correct city. How do all of these messages get to join together and be transmitted without getting mixed up? This process is achieved through the use of multiplmexing technology, which is a method that combines multiple analog message signals or digital data streams into one signal over a shared medium. OTN – Ideal Basis for Future Network Evolution. In most industries, every couple of years, some new technologies and products would come out to replace the old ones to satisfy the growing demands of people. That’s also what happened in the telecommunication industry.

In the past decades, different transmission technologies had come into being to satisfy the growing demands for broadband, from Plesiochronous Digital Hierarchy (PDH) to Synchronous Digital Hierarchy (SDH) and Wavelength-division multiplexing (WDM). PDH has good adaptability for point to point communication. PON Splitters—An Important Role in FTTH Networks. Created by the Full Service Access Network (FSAN) working group, the Passive Optical Network (PON) is a group of technologies that put Fiber to the Home (FTTH) into reality. It consists of a central office node optical line terminal (OLT) at the service provider’s office and a number of optical network units (ONUs) near the end users.

A single PON network interface can be shared among many subscribers through the use of PON splitters which contain no electronics and use no power. For the FTTH network designer, one of the key parameters is the achievable span between the central office and the subscribers (the maximum optical budget allowed in the system). As a part of the optical budget, the PON splitter is the most demanding component in terms of losses. Cnet.com - StumbleUpon.