On Choosing To Only Have One Kid - Leonie Dawson - Shining Life + Biz. When I was growing up I always thought I’d have a lot of kids. 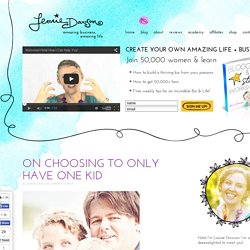 Four to be exact. Three boys named Dominic, Theodore and Bartholomew. And one little girl with bright wide blue eyes and a curly mop of golden hair and a spirit that was strong and vibrant. The funny thing though was this: "Let me say this straight up. Having any only child is not selfish." By RACHAEL BALL There seems to be a lot of hubble and bubble at the moment about the increase in one child families. 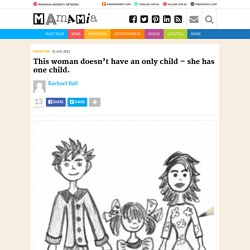 A lot of it appears to be the many opinions about parents who choose to stop at one. While there are many reasons why a family have one child, there seems to be a distinction for those who actually make this a conscious choice. Why I Won't Regret Having Only One Child. I promised myself that if I wasn’t pregnant with a second child by the time I turned 40, I’d put my ovaries to bed. 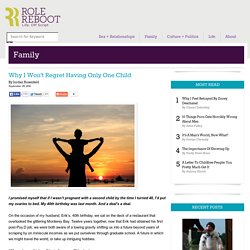 My 40th birthday was last month. And a deal’s a deal. On the occasion of my husband, Erik’s, 40th birthday, we sat on the deck of a restaurant that overlooked the glittering Monterey Bay. Why one child is enough for me: All of the joy, less of the crap. Photo courtesy of Justin Lane Dahlia is home sick from school. 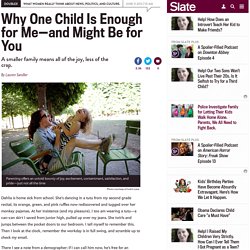 She’s dancing in a tutu from my second grade recital, its orange, green, and pink ruffles now rediscovered and tugged over her monkey pajamas. At her insistence (and my pleasure), I too am wearing a tutu—a can-can skirt I saved from junior high, pulled up over my jeans. Highly Sensitive People and Depression: Overstimulation May Lead to Depression - Highly Sensitive and Creative. By Susan Meindl Recent research by social psychologist Elaine Aron and her team describes a set of human characteristics which she calls “high sensitivity.” 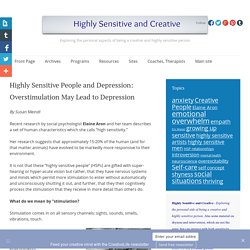 Her research suggests that approximately 15-20% of the human (and for that matter animals) have evolved to be markedly more responsive to their environment. It is not that these “highly sensitive people” (HSPs) are gifted with super-hearing or hyper-acute vision but rather, that they have nervous systems and minds which permit more stimulation to enter without automatically and unconsciously shutting it out, and further, that they then cognitively process the stimulation that they receive in more detail than others do. What do we mean by “stimulation? 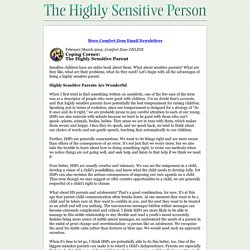 What about sensitive parents? Why I adore the night. It’s human to want light and warmth – our pagan ancestors had a calendar of fire-festivals, and God’s first recorded words, according to the Hebrew Bible are ‘Let there be light.’ 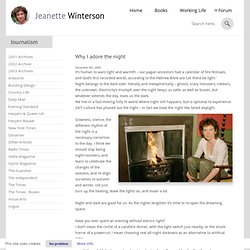 Night belongs to the dark side- literally and metaphorically – ghosts, scary monsters, robbers, the unknown. Electricity’s triumph over the night keeps us safer as well as busier, but whatever extends the day, loses us the dark. We live in a fast-moving fully lit world where night still happens, but is optional to experience. 24/7 culture has phased out the night – in fact we treat the night like failed daylight.

Slowness, silence, the different rhythm of the night is a necessary correction to the day. I think we should stop being night-resisters, and learn to celebrate the changes of the seasons, and re-align ourselves to autumn and winter, not just turn up the heating, leave the lights on, and moan a lot. Night and dark are good for us. Have you ever spent an evening without electric light? Gardening Australia - Fact Sheet: All About Rhizomes. Angus explains what rhizomes are and how to propagate from them Presenter: Angus Stewart, 13/06/2009 SERIES 20 Episode 20 Plants are made up of various parts: flowers, roots, leaves, and stems. 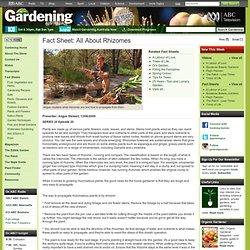 Stems hold plants erect so they can reach upwards for air and sunlight. They transplant food and nutrients to other parts of the plant, and store nutrients to produce new leaves and shoots from small bumps of tissue called nodes. There are two basic types of rhizome - running and compact. When it comes to growing rhizomatous plants, the good news for the home gardener is that they are tough and very easy to propagate.

The way to propagate rhizomatous plants is by division: * First remove all the dead and dying foliage and old flower stems. . * Remove the plant from the pot. . * You should now be able to see the structure of the rhizomes. . * The plant is now ready for the next stage. Information contained in this fact sheet is a summary of material included in the program.