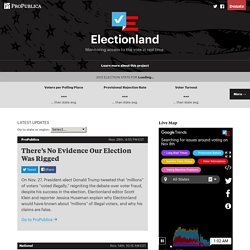 A video being passed around on Twitter has lit the fuse under claims of a “rigged” election, as a voter repeatedly tries – and fails – to vote for Trump. No matter how hard the voter pushes, the machine won’t change the ballot from Clinton. The video has picked up over 11,000 retweets after six hours online, and published by a number of blogs and websites as suspicious or as evidence of fraud. But the machine is working exactly as it should. Polling stations in Philadelphia, where the voter filmed the clip, use a Danaher Shouptronic voting machine. Electionland (@electionland) Google Trends Electionland. Live Presidential Forecast – Election Results 2016 – The New York Times.