Sedna. Sedna is the second most reddish planetary body in the Solar System, after Mars. 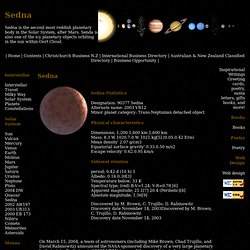 Although inclined by only around 11.9 degrees from the ecliptic where the eight major planets orbit, Sedna's distant orbit is extremely elliptical indicating that its formation and orbit may have been influenced by by a passing nearby star during the early years of the Solar System, when Sol formed out of a molecular cloud with many other closeby stars around 4.6 billion years ago. There is indirect evidence (an unexpectedly slow 40-day rotation) that Sedna has its own moon, which astronomers hope to confirm with the Hubble Space Telescope (more information and images from NASA.

Oort Cloud. The Oort cloud is an immense spherical cloud surrounding the planetary system and extending approximately 3 light years, about 30 trillion kilometres from the Sun. 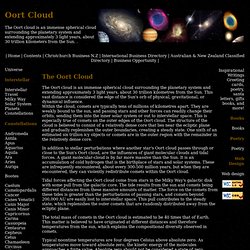 This vast distance is considered the edge of the Sun's orb of physical, gravitational, or dynamical influence. Within the cloud, comets are typically tens of millions of kilometres apart. They are weakly bound to the sun, and passing stars and other forces can readily change their orbits, sending them into the inner solar system or out to interstellar space. This is especially true of comets on the outer edges of the Oort cloud. The structure of the cloud is believed to consist of a relatively dense core that lies near the ecliptic plane and gradually replenishes the outer boundaries, creating a steady state. In addition to stellar perturbations where another star's Oort cloud passes through or close to the Sun's Oort cloud, are the influences of giant molecular clouds and tidal forces. What's in the Oort Cloud? Origins . . . Seven - Celestial Light Beings. Celestial Light Beings The Human Celestial Light Being Since I was very young I have known about the golden cloud around my head some have called this cloud. the cloud of knowledge and others have called it a golden halo of light. 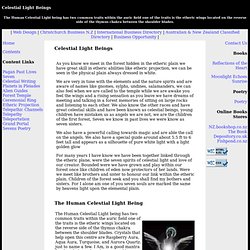 The halo within the aura is located around about six inches above the head. commonly halo's around found around celestial light beings, master, and spiritual leaders, and of course my sister and I are aware of golden halo's around our heads Crystals Used With This Energy Centre are Golden Herkimer, Enhydros, Golden Healers, Elestial Quartz. Double Etheric & Etheric Weavers One way I would describe our etheric doubles is being etheric weavers of energy of the etheric plane. Channeling & Energy Channels. Smic Poetry.

Iota Draconis Iota Draconis do you watch us from a distance As we drift throughout the night Are the planets in your system Barren worlds of rock and ice Are there life forms upon The surface of your worlds And do they watch us from heavens Do they see the essence of our light As we pass like strangers in the night Do the rivers flow with feeling Like the light within my soul Will I walk upon the surfaces of the worlds Within your system As I wish my cares away I look up to the heavens I shall save a prayer for you my cosmic neighbor As I long for the day When I will look upon you with my eyes Titans Overture As it drifts in the silence between the worlds of rock and ice Are you barren behind your cover Or are you teaming with new life Are you like your cosmic neighbors As you pass them in the night. 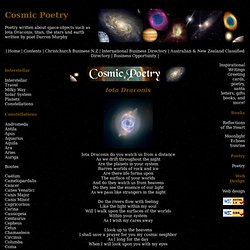 Wingmakers.co.nz. The best tool in the wingmaker skills to do this is the ability of Tele-visualization which is the ability of seeing with the minds eye in the three dimensional reality of sound, shape and form. 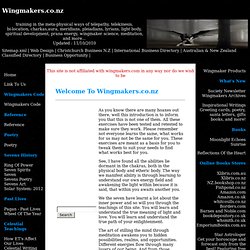 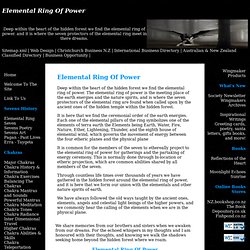 For the echoed whispers in my thoughts and I am honoured with their thoughts, and knowing we walk the shadows seeking home beyond the hidden forest where we roam. Elemental Ring Of Power The pillars of the elemental ring would stand about waist height on me and are made from stone and are positioned in alignment with the eight compass points starting from the north, north east, east, south east, south, south west, west, and north west. Merkaba Energy. Chakra Abilities And Skills.