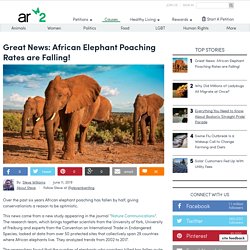 Conservationists are celebrating news that China has backtracked on a controversial proposal to lift a ban on the use of tiger and rhino parts in the antique trade, and in research and traditional medicine following international outrage. 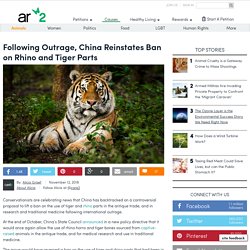 At the end of October, China’s State Council announced in a new policy directive that it would once again allow the use of rhino horns and tiger bones sourced from captive-raised animals in the antique trade, and for medical research and use in traditional medicine. The move would have reversed a ban on the use of tiger and rhino parts that had been in place for 25 years, and drew some heavy opposition from conservation organizations that it would help fuel the illegal wildlife trade that’s decimating rhinos and tigers in the wild. How-sea-turtles-in-one-community-made-a-remarkable-recovery-after-nearly-disappearing. 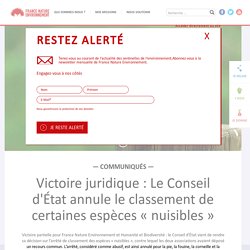 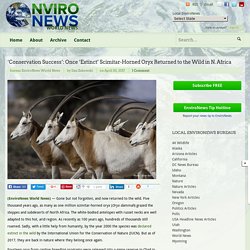 Five thousand years ago, as many as one million scimitar-horned oryx (Oryx dammah) grazed the steppes and subdeserts of North Africa. The white-bodied antelopes with russet necks are well adapted to this hot, arid region. As recently as 100 years ago, hundreds of thousands still roamed. Sadly, with a little help from humanity, by the year 2000 the species was declared extinct in the wild by the International Union for the Conservation of Nature (IUCN). But as of 2017, they are back in nature where they belong once again. Victory! Major Airline Bans Shark Fins. In a major victory for sharks, China Southern Airlines has officially banned the shipment of shark fins on its flights. 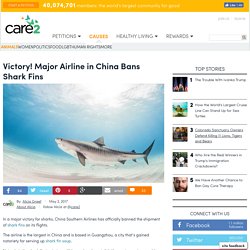 The airline is the largest in China and is based in Guangzhou, a city that’s gained notoriety for serving up shark fin soup. Not only is the shark fin trade incredibly cruel and wasteful, it’s causing serious problems for shark populations around the world. Switzerland bans trade in commercial seal products. March 7, 2017 Exemption made for products of hunts traditionally conducted by Inuit or other indigenous communities that contribute to the community's subsistence Humane Society International/Canada, Humane Society International/Europe. 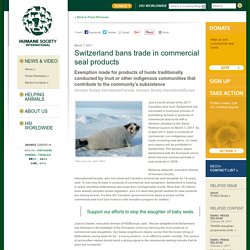 Success! China Announces End To Ivory Trade In 2017. In an announcement that could prove to be extremely good news for elephants in the wild, the Chinese government has promised to end its domestic ivory market by the end of this year. 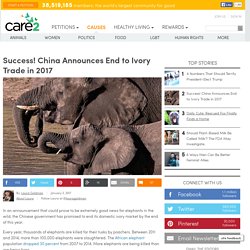 Every year, thousands of elephants are killed for their tusks by poachers. Between 2011 and 2014, more than 100,000 elephants were slaughtered. The African elephant population dropped 30 percent from 2007 to 2014. Success! African Grey Parrots Are Protected From The Wildlife Trade. Conservationists are celebrating a huge victory for African grey parrots, who are now one of the world’s most heavily trafficked birds, with news that world leaders voted to ban the international trade in wild-caught members of their species. 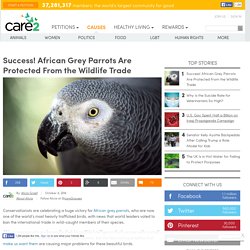 African grey parrots are known for their incredible intelligence that’s on par with a small child, and ability to learn and mimic human speech, but the fascinating qualities that make us want them are causing major problems for these beautiful birds. African grey parrots are native to east, central and west Africa, but their popularity as pets has caused the suffering of countless individuals who end up in the pet trade, and the demand for them has driven severe declines of their wild counterparts who are taken from their homes. Après 100 ans de déclin, le nombre de tigres sauvages serait pour la première fois en hausse. Most Dramatic Turn Around For Critically Endangered Species. Ten thousand years ago in the Pleistocene era, the California Condor roamed free and proud among other iconic ice age species such as the saber tooth cat, giant sloths and mastodons. 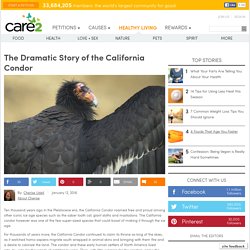 The California condor however was one of the few super-sized species that could boast of making it through the ice age. For thousands of years more, the California Condor continued to claim its throne as king of the skies, as it watched homo sapiens migrate south wrapped in animal skins and bringing with them fire and a desire to colonize the land. Victory! Ontario Bans Orca Captivity. In a major victory for animals, this week lawmakers in Ontario passed landmark legislation that bans keeping orcas in captivity and will bring improvements to living conditions for other captive marine mammals. 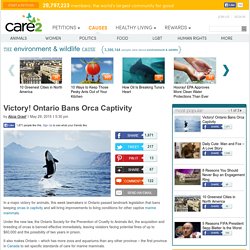 Under the new law, the Ontario Society for the Prevention of Cruelty to Animals Act, the acquisition and breeding of orcas is banned effective immediately, leaving violators facing potential fines of up to $60,000 and the possibility of two years in prison. It also makes Ontario – which has more zoos and aquariums than any other province – the first province in Canada to set specific standards of care for marine mammals. While the specific details of the new standards of care for marine mammals are still being worked out, they are expected to improve a number of aspects from sizes of enclosures and social groupings to updating regulations on how animals are handled and displayed.

2013 Thank You to Online Activists. Victory! EU's Seal Product Ban Upheld by World Trade Organization. In a landmark victory for seals, the World Trade Organization ruled on Monday to uphold the European Union’s (EU) ban on imported seal products over ethical concerns. In 2010, the EU enacted a ban on seal products, with exceptions for Inuit and other indigenous communities and for products that were derived for non-commercial purposes as a result of managing marine resources.

The move was challenged by Canada and Norway, which both argued that the embargo violated global trade rules and that the hunts are humane and sustainable, despite evidence to the contrary. The WTO pointed out inconsistencies and problems with trade agreements, but ruled in the end that the ban was valid because it fills “the objective of addressing EU public moral concerns on seal welfare to a certain extent, and no alternative measure was demonstrated to make an equivalent or greater contribution to the fulfillment of the objective.”

Canada and the EU have 60 days to appeal the ruling. Et si le tigre de Tasmanie était toujours en vie ? Tigers Make a Comeback: Something to Roar About. In a small triumph, the population of tigers in India and Thailand has grown. At the very end of last year, the Wildlife Conservation Society (WCS) reported that the numbers of tigers have increased in some protected areas in those two countries, thanks in part to significant government effort. In India, in the Western Ghats region of Karnataka State, there are now some 250 to 300 of the giant cats, a quadrupling of their population from some 30 years ago. Shipping Primates for Research Slowly Becoming Taboo.

In a victory for animals, the Canadian Transport Authority (CTA) has announced that it will uphold Air Canada’s decision to stop shipping primates who are destined for experimentation. “This landmark ruling confirms the right of Air Canada to refuse shipment of primates to laboratories, which is an important stimulus for more human-relevant biomedical research as well as the replacement or reduction of animal use,” said Gabriel Wildgen, campaigner for HSI/Canada. “We are very grateful to Air Canada for adopting such a progressive policy, and to the CTA for reinforcing Air Canada’s right to take a stand in favour of animal welfare and ethical science.”

Though it somehow sounds like the intro to a piece in The Onion about endangered species, the idea, adopted at the World Conservation Congress in Korea, is intended to highlight the fact that conservation isn’t just about saving individual species from extinction, but is also about preserving intact ecosystems.