Internet Voice Tool. Tips for question 1 Online filters and DMCA notices, which take down infringing content consistently overreach and often often result in the blocking of legal content.Monitoring billions of posts per day for infringement relies on automated systems, which cannot detect context and unfairly censor legal speech and expression.Geoblocking, where different content is available in different countries can be confusing when it is unclear why content is not available, and restricts access to knowledge and information.When individuals are responsible for monitoring content, they apply their own individual quirks and morality, often inconsistently. 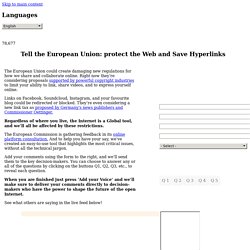 For example Facebook permits hate speech, but bans nudity. Click here to see the original question Have you encountered, or are you aware of problems faced by consumers or suppliers when dealing with online platforms? Tips for question 2 Are you a holder of rights in digital content protected by copyright which is used in an online platform? 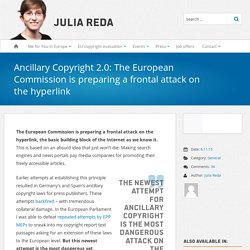 This is based on an absurd idea that just won’t die: Making search engines and news portals pay media companies for promoting their freely accessible articles. The newest attempt for ancillary copyright is the most dangerous attack on the hyperlink yetTweet this! Earlier attempts at establishing this principle resulted in Germany’s and Spain’s ancillary copyright laws for press publishers. These attempts backfired – with tremendous collateral damage. Platform Cooperativism : Nov 13-14, NYC. The seeds are being planted for a new kind of online economy. 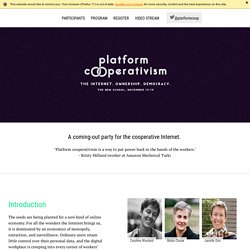 For all the wonders the Internet brings us, it is dominated by an economics of monopoly, extraction, and surveillance. Ordinary users retain little control over their personal data, and the digital workplace is creeping into every corner of workers’ lives. Online platforms often exploit and exacerbate existing inequalities in society, even while promising to be the great equalizers. Could the Internet be owned and governed differently? What if Uber drivers could set up their own platform, or if cities could control their own version of Airbnb? On November 13 and 14, the New School in New York City will host a coming-out party for the cooperative Internet, built of platforms owned and governed by the people who rely on them. Trevor Timm and Tim Shorrock on Stand Up For Truth webcast by davidcnswanson. No Fake Internet. Tell the FCC: Don't Destroy the Internet.

Is Obama's party destroying net neutrality? Take Back Your Privacy From the NSA. #TheDayWeFightBack. The Day We Fight Back: The Video. Websites so far. days hours minutes seconds left. 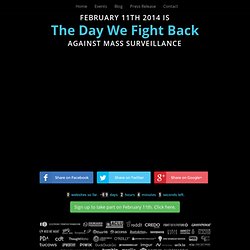 Necessary and Proportionate. The Day We Fought Back By The Numbers. Thanks to everyone who participated on Tuesday. 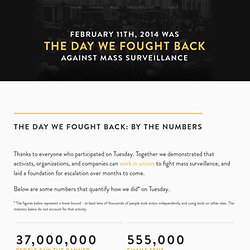 Together we demonstrated that activists, organizations, and companies can work in unison to fight mass surveillance, and laid a foundation for escalation over months to come. Below are some numbers that quantify how we did* on Tuesday. * The figures below represent a lower bound - at least tens of thousands of people took action independently and using tools on other sites. The statistics below do not account for that activity. The day we fought back. Something extraordinary happened last week: Organizations, major corporations, and activists made it clear that they're prepared to engage in a coordinated effort to rein in the NSA's unconstitutional mass spying programs. 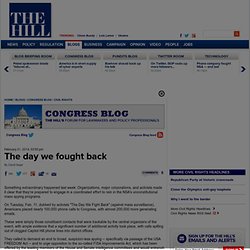 On Tuesday, Feb. 11, dubbed by activists "The Day We Fight Back" (against mass surveillance), Americans placed nearly 100,000 phone calls to Congress, with almost 200,000 more generating emails. These were simply those constituent contacts that were trackable by the central organizers of the event, with ample evidence that a significant number of additional activity took place, with calls spilling out of clogged Capitol Hill phone lines into district offices. It was perhaps the largest concentrated outpouring of support for privacy rights in the history of our country. But, one hopes, it won't hold that record for long.

The coalition has broadened substantially since the first Snowden leaks were made public in June of last year. Nsa-observer. 5 Funny Ways to Protest the NSA - Part 2. Since discussing “5 Funny Ways to Contest Corporate Personhood” earlier this year, a new frightening controversy has come to our attention: the NSA. 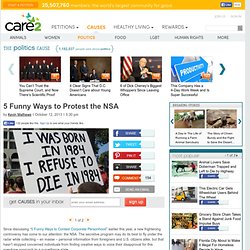 The secretive program may do its best to fly under the radar while collecting – en masse – personal information from foreigners and U.S. citizens alike, but that hasn’t stopped concerned individuals from finding creative ways to voice their disapproval for this overdone approach to a surveillance state. Here are five funny ways NSA dissenters have found to express themselves: 1. Adopting a Highway Restore the Fourth Utah, a local group opposed to the warrantless mass collection of data, found an inventive way of obtaining lawful proximity to the NSA: they adopted the highway adjacent to an NSA building. Like good adoptive parents, the group will be responsible for regularly cleaning litter from the highway… and they plan on holding signs opposing the NSA while doing so. 2. 3.