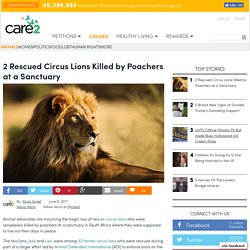 The two lions, José and Liso, were among 33 former circus lions who were rescued during part of a larger effort led by Animal Defenders International (ADI) to enforce bans on the use of wild animals in circuses in South America, otherwise known as Operation Spirit of Freedom. Last May, in what was hailed as the biggest airlift of lions ever, the lions were flown from Columbia and Peru to South Africa where they became permanent residents at the Emoya Big Cat Sanctuary in Limpopo, a place where they would finally leave their past lives behind and get the happy endings they each deserved. Sadly, José and Liso’s lives were cut short by poachers who targeted the sanctuary and killed them. Love This? Never Miss Another Story. Thanks for subscribing! “We were “just” a sanctuary. 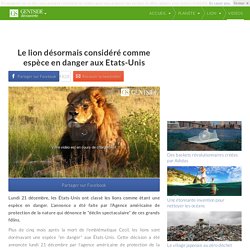 For centuries, lions have loomed large in our cultural imagination, not least because of their powerful symbolic meaning as icons of great strength, fierce courage and loyalty. 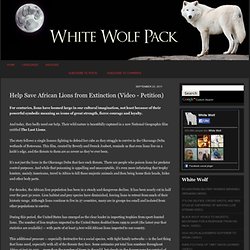 And today, they badly need our help. Their wild nature is beautifully captured in a new National Geographic film entitled The Last Lions. The story follows a single lioness fighting to defend her cubs as they struggle to survive in the Okavango Delta wetlands of Botswana. This film, created by Beverly and Dereck Joubert, reminds us that even lions live on a knife’s edge, and the threats to them are as severe as they’ve ever been. It’s not just the lions in the Okavango Delta that face such threats. For decades, the African lion population has been in a steady and dangerous decline.

During this period, the United States has emerged as the clear leader in importing trophies from sport-hunted lions. It’s not too late to save the magnificent African lion, but we must act now. Africa's Lions In Steep Decline. A surprising new study released this week finds that Africa is losing its lions, fast. 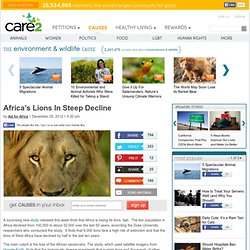 The lion population in Africa declined from 100,000 to about 32,000 over the last 50 years, according the Duke University researchers who conducted the study. It finds that 6,000 lions face a high risk of extinction and that the lions of West Africa have declined by half in the last ten years. The main culprit is the loss of the African savannahs. The study, which used satellite imagery from Google Earth, finds that the biologically diverse grasslands that sustain lions and thousands of other species have declined by 75 percent since 1960. The loss is so severe that it is outpacing the loss of tropical rainforests. What happens in Africa in the next 10 years will decide the future of lions, according to scientists familiar with the study. Aid for Africa members are doing just that. Learn more about Aid for Africa members providing support to wildlife in Sub Saharan Africa. Related Stories: As Tigers Go Extinct, Chinese Medicine Switches to Lions.

Lions are losing out in South Africa, whether through trade in legally-sourced lion bones, illegal poaching or trophy hunting. 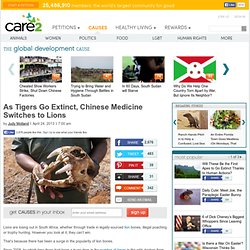 However you look at it, they can’t win. That’s because there has been a surge in the popularity of lion bones. Since 2008, by which time there had been a huge drop in the number of tigers in the wild, traders from countries such as China and Vietnam have been taking an interest in South African lions. Chinese medicine has traditionally used the powdered bones of tigers to cure many illnesses, such as rheumatism, ulcers and stomach aches. Tiger bones have also been credited with boosting virility in men. Impact of Chinese Medicine From The Guardian: Despite the lack of scientific proof this potion is very popular, so with tiger bones increasingly scarce, vendors are replacing them with the remains of lions.