Docker Compose. How to debug a Docker container. I've learned so many things during the migration of this blog to CoreOS that I didn't know how to write about it. 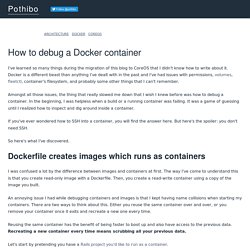 Docker is a different beast than anything I've dealt with in the past and I've had issues with permissions, volumes, fleetctl, container's filesystem, and probably some other things that I can't remember. Amongst all those issues, the thing that really slowed me down that I wish I knew before was how to debug a container. In the beginning, I was helpless when a build or a running container was failing.

Build your own image - Docker. Estimated reading time: 9 minutes The whalesay image could be improved. 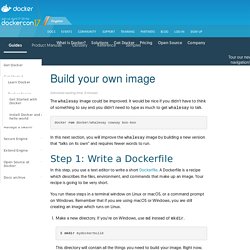 It would be nice if you didn’t have to think of something to say and you didn’t need to type as much to get whalesay to talk. docker run docker/whalesay cowsay boo-boo In this next section, you will improve the whalesay image by building a new version that “talks on its own” and requires fewer words to run. Step 1: Write a Dockerfile¶ Create Your First Docker Container – JamesCoyle.net. Create Your First Docker Container Docker is probably one of the easiest environments to create a virtualised instance based on a number of flavours of operating systems. 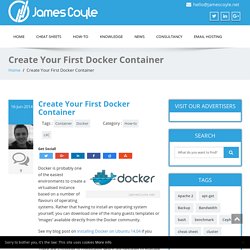 Rather that having to install an operating system yourself, you can download one of the many guests templates or ‘images’ available directly from the Docker community. See my blog post on installing Docker on Ubuntu 14.04 if you don’t currently have Docker installed. There are a number of commands which are required to manage Docker containers and images. How to get into a docker container? Create Your First Docker Container – JamesCoyle.net. How to remove old Docker containers. How to Remove Docker Images and Containers. How to run a command on an already existing docker container? Baseimage-docker: A minimal Ubuntu base image modified for Docker-friendliness. You learned about Docker. 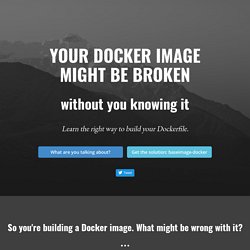 It's awesome and you're excited. You go and create a Dockerfile: FROM ubuntu:16.04 RUN apt-get install all_my_dependencies ADD my_app_files /my_app CMD ["/my_app/start.sh"] Cool, it seems to work.