Heroes and Legends: The Most Influential Characters of Literature. Heroes hold a special place in our imagination. 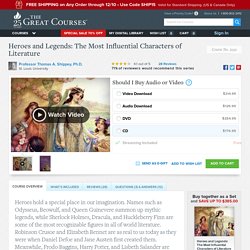 Names such as Odysseus, Beowulf, and Queen Guinevere summon up mythic legends, while Sherlock Holmes, Dracula, and Huckleberry Finn are some of the most recognizable figures in all of world literature. Robinson Crusoe and Elizabeth Bennet are as real to us today as they were when Daniel Defoe and Jane Austen first created them. Meanwhile, Frodo Baggins, Harry Potter, and Lisbeth Salander are heroes for our age and the legends of the future. Show Full Description Hide Full Description What do these memorable characters have in common? Heroes and Legends: The Most Influential Characters of Literature is an incredible opportunity to study some of the most memorable and important characters ever created. Delve into original sources and explore the notable impact of these characters on world history. What does it mean to be a hero? The word “hero” might bring to mind a strong, fearless warrior who swoops in to save the day.

Why I Seldom Teach The Hero's Journey Anymore. Back when I was in grad school myth was seldom spoken of in public without a sneer. 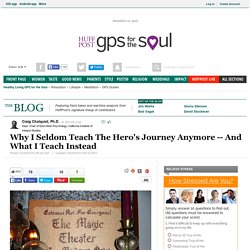 Kid stuff! Only recently had Joseph Campbell and Bill Moyers opened the discussion with their influential television series The Power of Myth. Today, you hear about myth everywhere: in sales (for the ancient Greeks Nike was a goddess and Atlas a god), marketing strategy guides, motivational presentations in corporate boardrooms. Game of Thrones, Once Upon a Time, Star Wars, The Avengers, Maleficent, and the list goes on and on.

The public is starved for myth, as philologist JRR Tolkien learned when he published The Hobbit and then The Lord of the Rings. In The Hero with a Thousand Faces Campbell writes, It has always been the prime function of mythology and rite to supply the symbols that carry the human spirit forward, in counteraction to those other constant human fantasies that tend to tie it back. We need adequate stories that bring magic and make meaning. Separation > Initiation > Return What more? Eog. Mini-Comics Day. Mini-Comics Day Create a Mini-Comic in a Day 3/14/15 Skip to content Resources Here are the assets for the 2013 Minneapolis event by 2012 Stapler Award Winner Athena Currier. 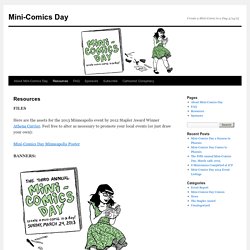 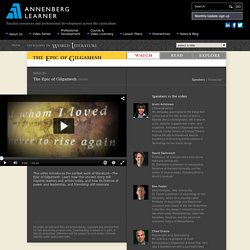 The first road movie Starlin: It's a root source. Gilgamesh is lumped in there in my head with Moby Dick, and Beowulf, and Captain America. Plenty of action, Gracia: Sex, romance. Damrosch: There's violence, adventure. Starlin: Maybe it's survived as long because it can become a little something for everybody Ashikawa: This is the epic that includes most important philosophy ever TITLE CARD IAUMI ASHIZAMA / Choreographer: My first encounter to the Gilgamesh was in Japan. TITLE CARD LUDMILLA ZEMAN / Childrens Book Author and Illustrator: When I read all these versions and translations, I fall in love right away.

TITLE CARD AZAR NAFISI / Author: The first time I heard of Gilgamesh was through my father, I must have been around five or six. TITLE CARD JIM STARLIN / Comic Book Writer and Illustrator: In New York in the 70s. Very Tiny Classics: Beowulf. If you want to print out and fold your very own Tiny Classics edition of Beowulf, download this pdf, print it out at full scale, and then follow these incomprehensible instructions to fold it into an adorable little mini-comic. 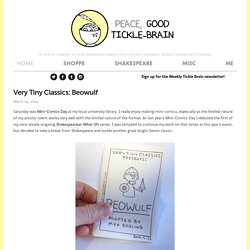 To see more of my mini-comics, go here. To learn more about the extremely fun art of mini-comics, check out these resources. Mini-comics are super-fun to make and distribute. Don't let your perceived lack of artistic talent stop you from giving them a try. If I did that, I would never have started this website in the first place. Very Tiny Classics: Beowulf.