Altizer Law, P.C., helps people throughout Virginia, and people from out of state who were injured or killed in a Virginia vehicle accident and all cases related to Auto accidents, truck accidents, Motorcycle accidents, Medical Malpractice and much more.

Higher Auto Insurance Rates in 2020 - Altizer Law. It seems that we should expect higher auto insurance rates in 2020, according to sources throughout the industry. 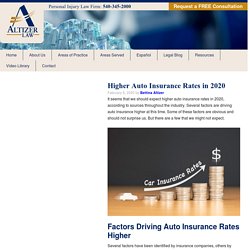 Several factors are driving auto insurance higher at this time. Some of these factors are obvious and should not surprise us. But there are a few that we might not expect. Several factors have been identified by insurance companies, others by industry observers, and still others by insured drivers. The factors most commonly cited are these: Driving more miles. If your auto insurance price rises, there may be steps you can take to offset some of the price increase. Your insurance agent has the answers you need to make adjustments to your coverage. This might be a good reason to sit down with your agent and discuss your coverage needs, costs, and ways to find savings.

Children in Car Crashes - Altizer Law. When children are involved in car crashes, they are susceptible to a number of injury types and causes of death. 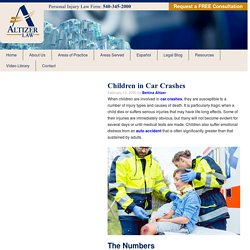 It is particularly tragic when a child dies or suffers serious injuries that may have life-long effects. Some of their injuries are immediately obvious, but many will not become evident for several days or until medical tests are made. Children also suffer emotional distress from an auto accident that is often significantly greater than that sustained by adults. The top cause of death among children and adolescents in 2016 was motor vehicle crashes. A motor vehicle accident was the leading cause of accidental death among teens (the cause of more than one-third of all teen deaths).

Every state in the U.S. has a child restraint law that establishes the type of safety seat and the age and size limits. The following table presents the number of children involved in traffic accidents, the number injured and the number of fatalities in Virginia in the last three years. How Do Pre-Existing Injuries Affect My Car Accident Settlement in Virginia? If you have a pre-existing condition yet have recently been in a car accident or any other type of accident caused by a wrongdoer that exacerbated your current symptoms or created new injuries, you may be wondering if those pre-existing conditions will affect your settlement. 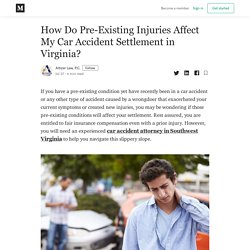 Rest assured, you are entitled to fair insurance compensation even with a prior injury. However, you will need an experienced car accident attorney in Southwest Virginia to help you navigate this slippery slope. Check out the things you need to know about building a strong injury claim. Most personal injury claims tend to be settled through the insurance company of the at-fault person. Whether your claim arises from a car accident, slip and fall, or work-related injury, insurance adjusters will always try to pay out as little as possible. Reasons to Hire a Motorcycle Accident Attorney in Virginia - Altizer Law.

Whether you enjoy riding your bike on the Blue Ridge Parkway or just around our beautiful roads in Southwest Virginia, you know how enjoyable and free riding a motorcycle can be. 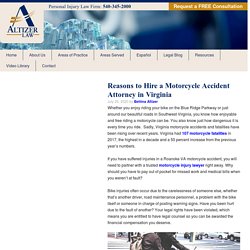 You also know just how dangerous it is every time you ride. Sadly, Virginia motorcycle accidents and fatalities have been rising over recent years. Virginia had 107 motorcycle fatalities in 2017, the highest in a decade and a 50 percent increase from the previous year’s numbers. If you have suffered injuries in a Roanoke VA motorcycle accident, you will need to partner with a trusted motorcycle injury lawyer right away. Why should you have to pay out of pocket for missed work and medical bills when you weren’t at fault? 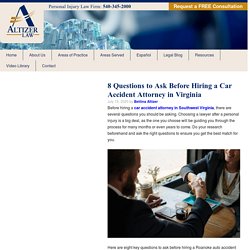 Choosing a lawyer after a personal injury is a big deal, as the one you choose will be guiding you through the process for many months or even years to come. Do your research beforehand and ask the right questions to ensure you get the best match for you. Here are eight key questions to ask before hiring a Roanoke auto accident attorney. 1.

Have You Handled a Case Like Mine Before? Many lawyers are the legal equivalent of general practitioners. Liability in Three-Car Crashes - Altizer Law Virginia. Liability in three-car crashes seems that it would be a rare matter. 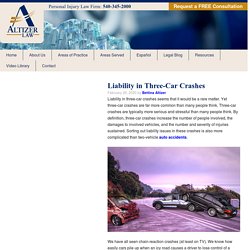 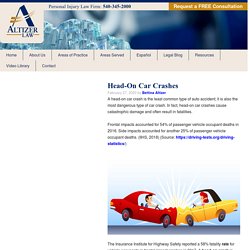 Head-on collisions are exactly what the designation implies: two vehicles crash together at the front end of both cars. One vehicle drifts across the center line and into the path of oncoming vehicles.One driver has entered an on-ramp or exit froBettina C Altizerm the wrong direction.One driver swerves to avoid a hazard and causes a head-on collision. Sideswipe Crashes Can Be Serious (Virginia)

Sideswipe crashes can be minor in terms of property damage or injuries to drivers and passengers. 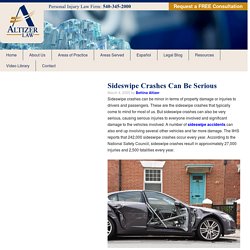 What causes chest pain after an auto accident that caused you no visible injuries? 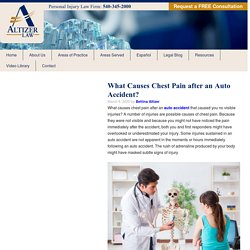 A number of injuries are possible causes of chest pain. Because they were not visible and because you might not have noticed the pain immediately after the accident, both you and first responders might have overlooked or underestimated your injury. How to Reduce Fatal Accidents by 26 Percent - Altizer Law. Drivers in the U.S. can reduce fatal accidents by 26 percent with one change in our driving habits. 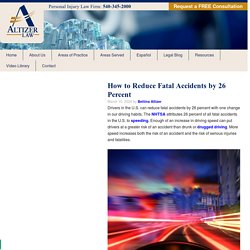 The NHTSA attributes 26 percent of all fatal accidents in the U.S. to speeding. Enough of an increase in driving speed can put drivers at a greater risk of an accident than drunk or drugged driving. More speed increases both the risk of an accident and the risk of serious injuries and fatalities. Some people slip into thinking that a speed limit is just an arbitrary number painted on a sign. Truck Accident - Roanoke Truck Accident Attorney. Southwest Virginia Motorcycle Accident - Motorcycle Accident Lawyer. “Knees in the breeze.”

“Go Your Own Way” “Ride to Live, Live to Ride” Freedom, bikes, and the road – that is America. The legal team at Altizer Law, P.C., understand motorcyclists who enjoy and are passionate for the freedoms of the open highway. We also understand the unique nature of lessened protections and reduced visibility for the Virginia motorcyclist. The Virginia motorcyclist is at a higher risk on the highway, and because of that Virginia Motorcyclists need lawyers who get it — who understand the values of riding motorcycles and who will advocate for their rights should they be injured by the carelessness of another driver. Virginia Motorcyclists Have Rights!! You have the same right as every other motorist to full and fair compensation if you were injured by the fault of another driver. Southwest Virginia Medical Malpractice - Medical Malpractice Lawyer VA.