Linux Uniq Command Tutorial for Beginners (10 examples) If you are a Linux command line user, and your work involves playing with text files, you should know (if not already) that there are many command line utilities that may be of great help to you in different situations. 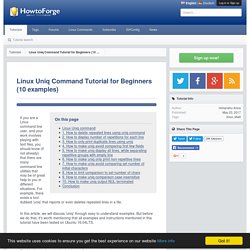 For example, there exists a tool dubbed 'uniq' that reports or even deletes repeated lines in a file. In this article, we will discuss 'uniq' through easy to understand examples.

Réseau. Bash. Make Peace With Your Processes: Part 3. In parts 1 and 2 of this series, I introduced the ps command and provided tips on how to harness some of its many options to find out which processes are running on your system. 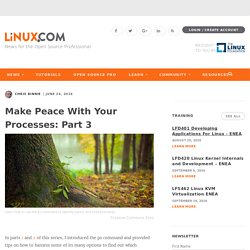 Now, picture a scene in which you want to check for the parents of a process, which I’ll look at more closely in a minute. Using DSH (Distributed Shell) to Run Linux Commands Across Multiple Machines. Systems Administrators know all too well the importance of being able to monitor and administer numerous machines in a short time, and preferably, with as little running around as possible. 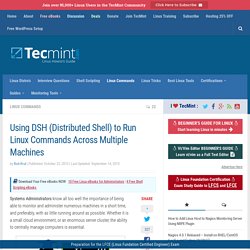 Whether it is a small cloud environment, or an enormous server cluster, the ability to centrally manage computers is essential. The Non-Beginner’s Guide to Syncing Data with Rsync. The rsync protocol can be pretty simple to use for ordinary backup/synchronization jobs, but some of its more advanced features may surprise you. 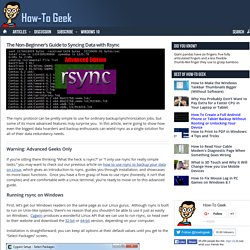 In this article, we’re going to show how even the biggest data hoarders and backup enthusiasts can wield rsync as a single solution for all of their data redundancy needs. 11 Lesser Known Useful Linux Commands. Linux command line attracts most of the Linux Enthusiastic. 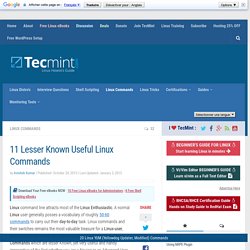 A normal Linux user generally posses a vocabulary of roughly 50-60 commands to carry out their day-to-day task. Linux commands and their switches remains the most valuable treasure for a Linux-user, Shell-script programmer and Administrator. There are some Linux Commands which are lesser Known, yet very useful and handy irrespective of the fact whether you are a Novice or an Advanced User. This very article aims at throwing light on some of the lesser known Linux commands which surely will help you to handle your Desktop/Server more efficiently. 1. sudo !! Running the command without specifying sudo command will give you permission denied error. . $ sudo !! Linux dd Command Show Progress Copy Bar With Status. ByVivek GiteonOctober 20, 2012 last updated December 31, 2014 I'm using dd command for block level copy and just found out that there's no built in way to check the progress. 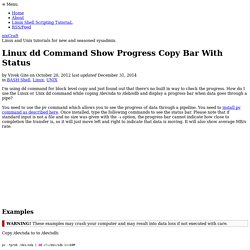 » Linuxaria – Everything about GNU/Linux and Open source Understanding Nmap Commands: In depth Tutorial with examples. Article by James Hawkins As we all know, Nmap (Network Mapper) is a stealth port scanner widely used by network security experts (including forensics & Pen-testing Experts). 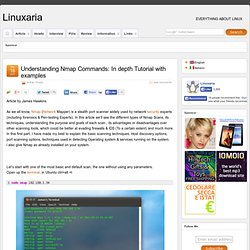 In this article we’ll see the different types of Nmap Scans, its techniques, understanding the purpose and goals of each scan , its advantages or disadvantages over other scanning tools, which could be better at evading firewalls & IDS (To a certain extent) and much more. In this first part, I have made my best to explain the basic scanning techniques, Host discovery options, port scanning options, techniques used in detecting Operating system & services running on the system. i also give Nmap as already installed on your system. Let’s start with one of the most basic and default scan, the one without using any parameters. Open up the terminal, in Ubuntu ctrl+alt +t This is a basic scan of the local IP address 192.168.1.34, we use sudo to gain administrator privileges, and then we give the target to Nmap.

Discovery. Linux Shortcuts and Commands (Highly recommended) Next: About this document ... 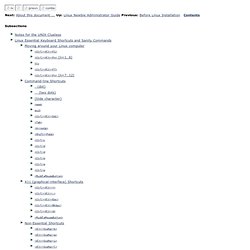 Up: Linux Newbie Administrator Guide Previous: Before Linux Installation Contents. How To Look Like A UNIX Guru. Terence Parr Last updated: August 30, 2006 Translations: UNIX is an extremely popular platform for deploying server software partly because of its security and stability, but also because it has a rich set of command line and scripting tools. 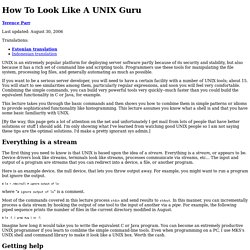 Programmers use these tools for manipulating the file system, processing log files, and generally automating as much as possible. If you want to be a serious server developer, you will need to have a certain facility with a number of UNIX tools; about 15. This lecture takes you through the basic commands and then shows you how to combine them in simple patterns or idioms to provide sophisticated functionality like histogramming.

[By the way, this page gets a lot of attention on the net and unfortunately I get mail from lots of people that have better solutions or stuff I should add. cURL - Tutorial. cURL Docs Tutorial HTTP Scripting 1.1 Background1.2 The HTTP Protocol1.3 See the Protocol1.4 See the Timing1.5 See the Response 2.1 Spec2.2 Host2.3 Port number2.4 User name and password2.5 Path part. 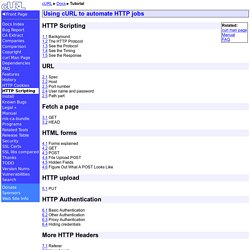 Become a Command Line Ninja With These Time-Saving Shortcuts.

SSH. Tips, astuces, cas concrets. Seders's grab bag - Tutorials. If you have written anything about sed - whether an introduction, how sed got you out of a real-life situation, or perhaps an advanced technique you've discovered - you may like have your work published here. Your contribution will be very welcome. Intros sed one-liners (18kb) The essential, official compendium of useful sed one-liners. Organised into sections by usage, such as file spacing, line numbering, selective line removal/deletion and optimisation. Linux / UNIX: Run Command a Number of Times In a Row. All commands sorted by votes. LinuxCommand.org: Learn the Linux command line. Write shell scripts.