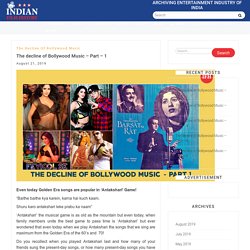 “Baithe baithe kya karein, karna hai kuch kaam. Shuru karo antakshari leke prabu ka naam” ‘Antakshari’ the musical game is as old as the mountain but even today, when family members unite the best game to pass time is ‘Antakshari’ but ever wondered that even today when we play Antakshari the songs that we sing are maximum from the Golden Era of the 60’s and 70! Do you recollect when you played Antakshari last and how many of your friends sung the present-day songs, or how many present-day songs you have sung? Well, the truth is the movement the musical game of Anatakshari starts you are blank to remember modern-day songs and mostly recall super hit songs of Lata Mangeshkar, Mohd Rafi, Mukesh, Asha Bhosle, and Kishore Kumar. 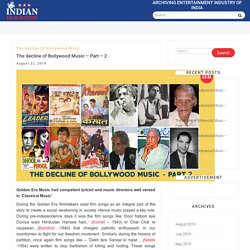 Hence music played a key role. During pre-independence days it was the film songs like ‘Door hatoon aye Duniya walo Hindustan Hamara hain..’ (Kismet – 1943) or Chal Chal re naujawan…(Bandhan -1940) that charged patriotic enthusiasm in our countrymen to fight for our freedom movement. The decline of Bollywood Music - Part - 3. The decline of Bollywood Music - Part - 4.

Golden Era music convened sensual effect through flowery poetry It is not that sensual and arousing numbers were not used in films of the Golden Era but the fact is poets had command over language hence they used such flowery language that it beautifully and aesthetically conveyed the meaning without being crude and vulgar. 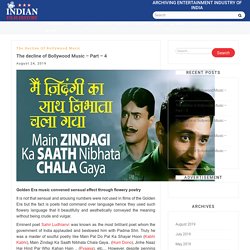 Eminent poet Sahir Ludhianvi was known as the most brilliant poet whom the government of India applauded and bestowed him with Padma Shri. Truly he was a master of soulful poetry like Main Pal Do Pal Ka Shayar Hoon (Kabhi Kabhi), Main Zindagi Ka Saath Nibhata Chala Gaya.. (Hum Dono), Jinhe Naaz Hai Hind Par Who Kahan Hain .. (Pyaasa), etc… However, despite penning such heart-rendering songs Sahir also wrote seductive and sensual songs. The decline of Bollywood Music - Part - 5. Today Even Old Classic Hit Songs are being crucified by Re-Mix While some feel the degradation in the music began with lewd lyrics like Choli Ke Peeche Kya Hai (Khalnayak 1993) while some argue that the song Sarkai Lo Khatiya Jada Lage (Raja Babu -1994) gave movement to such vulgar songs. 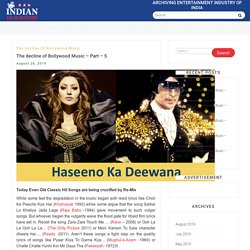 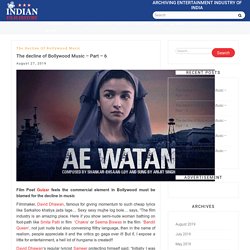 Here if you show semi-nude woman bathing on foot-path like Smita Patil in film ‘Chakra‘ or Seema Biswas in the film ‘Bandit Queen‘, not just nude but also conversing filthy language, then in the name of realism, people appreciate it and the critics go gaga over it! But if, I expose a little for entertainment, a hell lot of hungama is created!! David Dhawan‘s regular lyricist Sameer protecting himself said, “Initially I was very uncomfortable while penning Sarkailo khatiya jaada laage… but David sahab convinced me that cinema is fun and entertainment. Since the songs become a hit I think David Sahab was not wrong”. Patriotic Songs played a key role in the success of films – Part – 3. Since the 1940s’ history-based films have been a favourite of the masses. 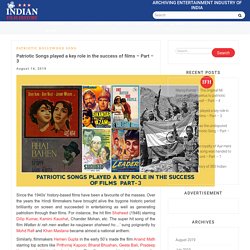 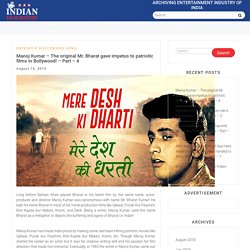 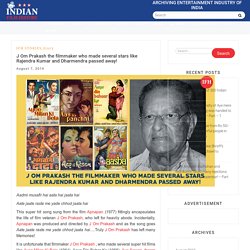 Incidentally, Apnapan was produced and directed by J Om Prakash and as the song goes Aate jaate raste me yade chhod jaata hai….Truly J Om Prakash has left many Memories! It is unfortunate that filmmaker J Om Prakash , who made several super hit films like Ayee Milan Ki Bela (1964), Aaye Din Bahar Ke (1966), Aya Sawan Jhoom Ke (1969), Aap Ki Kasam (1974), Aasha (1980) on his tragic death is being remembered as the ‘Grandfather of Hrithik Roshan‘! The media must be shamed that the name of Hrithik Roshan that they are using to generate TRP and gain maximum Google search must know that it was filmmaker J Om Prakash who gave Hrithik Roshan‘s father, Rakesh Roshan, his career’s first hit film as a solo hero in Aankhon Aankhon Mein (1972). Bhuj- A heroic story of 300 Indian women. J Om Prakash the filmmaker who made several stars like Rajendra Kumar and Dharmendra passed away! Vicky Kaushal kicked his lucrative Electronic Engineering Job to become a film star! – Part – 4. 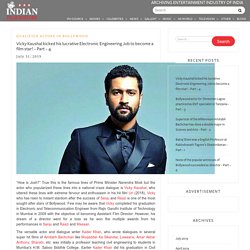 True this is the famous lines of Prime Minister Narendra Modi but the actor who popularized these lines into a national craze dialogue is Vicky Kaushal, who uttered these lines with extreme fervour and enthusiasm in his hit film Uri (2018). Vicky who has risen to instant stardom after the success of Sanju and Raazi is one of the most sought after stars of Bollywood. Few may be aware that Vicky completed his graduation in Electronic and Telecommunication Engineer from Rajiv Gandhi Institute of Technology in Mumbai in 2009 with the objective of becoming Assistant Film Director. However, his dream of a director went for a toss as he won the multiple awards from his performances in Sanju and Raazi and Masaan. Sushant Singh Rajput, who made headline with his award-winning performance in Raabta and MS Dhoni was also a bright engineering student and 7th rank holder at the All India Engineering Entrance Exams (AIEEE). 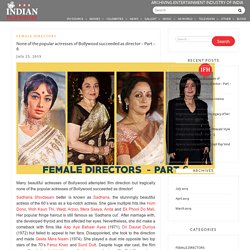 Sadhana Shivdasani better is known as Sadhana, the stunningly beautiful actress of the 60’s was as a top-notch actress. She gave multiple hits like Hum Dono, Woh Kaun Thi, Waqt, Arzoo, Mera Saaya, Anita and Ek Phool Do Mali. Her popular fringe haircut is still famous as ‘Sadhana cut’. After marriage with, she developed thyroid and this affected her eyes.