Biggest MMO In The Name Of Ragnarok VR Is Trending In The World That You Haven’t Heard It Yet. MOBILE DEVICES. Mobile devices in learning. Get Ready For Virtual Reality Trip. So what if someone says to you that I’ll make you visit the Mars? 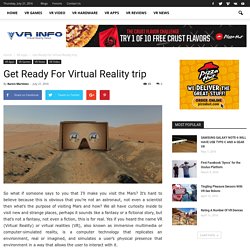 It’s hard to believe because this is obvious that you’re not an astronaut, not even a scientist then what’s the purpose of visiting Mars and how? We all have curiosity inside to visit new and strange places, perhaps it sounds like a fantasy or a fictional story, but that’s not a fantasy, not even a fiction, this is for real. Yes if you heard the name VR (Virtual Reality) or virtual realities (VR), also known as immersive multimedia or computer-simulated reality, is a computer technology that replicates an environment, real or imagined, and simulates a user’s physical presence that environment in a way that allows the user to interact with it. So here we have latest VR News that Google is opening up the VR experience to everyone. In case you’re not familiar. Welcome to Derren Brown’s “Ghost Ride” through Virtual Reality - Virtual Reality App Reviews. Videos. Useful Resources. The changing significance of Gallipoli. Teaching.

Virtual Reality Ghost Train is waiting for you – allvrinfoblog. So are you fond of creepy things or visiting haunted places? 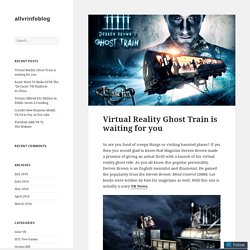 If yes then you would glad to know that Magician Derren Brown made a promise of giving an actual thrill with a launch of his virtual reality ghost ride. As you all know this popular personality, Derren Brown is an English mentalist and illusionist. He gained the popularity from the Derren Brown: Mind Control (2000). Lot books were written by him for magicians as well. Well this one is actually a scary VR News. The opening of this Ghost Train is taking place at Thorpe Park Resort (England) tomorrow, was designed by Derren Brown and integrates virtual reality, live actors and his trademark illusions.

Brown said “This is a million miles away from the creepy old things you find at funfairs and hugely exciting, it made perfect sense to reinvent the idea for a new generation. “The writing, what we’ve designed and what the theme is will without doubt set pulses racing. 2,000sq ft. Australians are Enormous Consumers of Virtual Reality Explicit Videos. New Retro Arcade Game Has Rift CV1 and HTC Vive Support On Steam – VIRTUAL REALITY APPS – NEWS & REVIEWS ABOUT GAMES, VIDEOS AND HARDWARE. HTC Vive is going to have a new Retro Arcade Demo, which has been launched by Developer Digital Cybercherries. 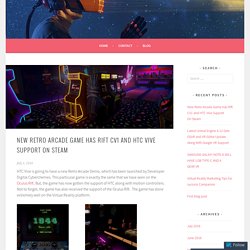 This particular game is exactly the same that we have seen on the Oculus Rift. But, the game has now gotten the support of HTC along with motion controllers. Not to forget, the game has also received the support of the Oculus Rift. Latest Virtual Reality Industry News. Proto Award Entries From July 10 To 24. Proto Award Entries From July 10 To 24 The foundation called virtual reality foundation announced the 2016 Proto awards in VR will accept entries from July 10 to 24. 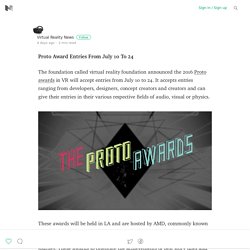 It accepts entries ranging from developers, designers, concept creators and creators and can give their entries in their various respective fields of audio, visual or physics. These awards will be held in LA and are hosted by AMD, commonly known as proto awards. Roy Taylor, senior VP of AMD said how VR will be a great and blooming future for gaming and it is going to be a long but successful journey.

These awards to celebrate the achievements of best story lines and creators. Proto awards are giving the behind the scenes creators of VR a chance to create new content and be awarded for the content they created previous year. There will be following awards in Proto awards this year and nominations are open for them. . · Best Live Action Experience · Best Mobile Experience · Best Sound Design · Best Original Score · Best Gameplay.

VR devices are being used to cure Paranoia. How The Future Of Immersive Sports Live-Streaming Is Connected To Nextvr? Virtual Reality is possessed with a power to transport you to anywhere in the universe. 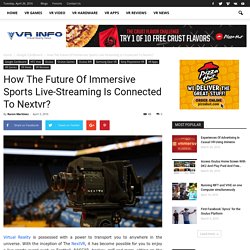 With the inception of The NextVR, it has become possible for you to enjoy a live sports event such as Football, NASCAR, hockey, golf and more, sitting on the front seat. NextVR has recently signed a big fat deal of 5 years with Fox Sports to showcase all the major events on VR. NextVR will have the right to broadcast US Open Golf, NFL and Baseball. We were able to get in touch with Helen Situ, who is an important member of the evangelist at NextVR. Oculus vr Help Center: All VR INFO : Loading Human: First person VR game 2016. With small games like The gallery and Technolust showcasing first person and VR, big games too like Thunderbird and abduction along with many non VR games like Firewatch, it is apparent how first person narrative story driven VR games are gaining popularity this year. 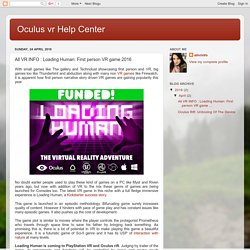 No doubt earlier people used to play these kind of games on a PC like Myst and Riven years ago, but now with addition of VR to the mix these genre of games are being launched for Consoles too. The latest VR game in this niche with a full fledge immersive experience is Loading Human, a Kickstarter success story. This game is launched in an episodic methodology. Bifurcating game surely increases quality of content. However it hinders with pace of game play and has constant issues like many episodic games.

Oculus Rift: Unboxing Of The Device: allvrinfo. It has been three long years since the Oculus Rift Developer Kit that was funded by the popular brand ‘Kickstarter’ has been shipped. 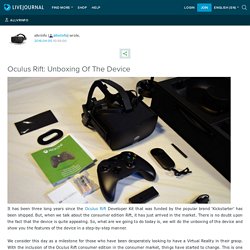 But, when we talk about the consumer edition Rift, it has just arrived in the market. Latest Virtual Reality Industry News. It has been three long years since the Oculus Rift Developer Kit that was funded by the popular brand ‘Kickstarter’ has been shipped. 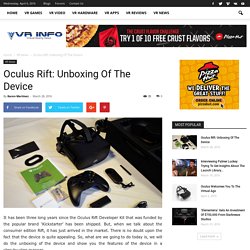 But, when we talk about the consumer edition Rift, it has just arrived in the market. There is no doubt upon the fact that the device is quite appealing. So, what are we going to do today is, we will do the unboxing of the device and show you the features of the device in a step-by-step manner. Virtual Reality Support And Setup Help.