Doubts Linger as HP Poises for a Split. HP's Big Deal: Tech Giant Buys Aruba Networks for $2.7B. SAN FRANCISCO — Hewlett-Packard is buying wireless networking company Aruba Networks for about $2.7 billion, in what amounts to HP's first major acquisition since its disastrous purchase of a British software company in 2011. 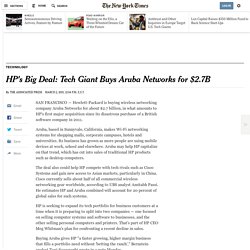 Aruba, based in Sunnyvale, California, makes Wi-Fi networking systems for shopping malls, corporate campuses, hotels and universities. Its business has grown as more people are using mobile devices at work, school and elsewhere. Aruba may help HP capitalize on that trend, which has cut into sales of traditional HP products such as desktop computers. The deal also could help HP compete with tech rivals such as Cisco Systems and gain new access to Asian markets, particularly in China. Cisco currently sells about half of all commercial wireless networking gear worldwide, according to UBS analyst Amitabh Passi. Business Technology Solution Sales content from The VAR Guy. Hewlett-Packard (HPQ) has unwrapped two new Apollo supercomputers, one of which is the first liquid-cooled supercomputer at the high end of the market, signaling the vendor’s intention to extend its lead over IBM (IBM) in the high-performance segment. 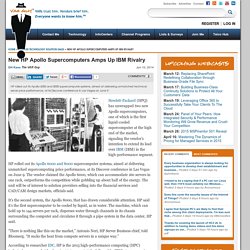 HP rolled out its Apollo 6000 and 8000 supercomputer systems, aimed at delivering unmatched supercomputing price performance, at its Discover conference in Las Vegas on June 9. The vendor claimed the Apollo 6000, which can accommodate 160 servers in one rack, outperforms the competition while gobbling up about half of the energy. The unit will be of interest to solution providers selling into the financial services and CAD/CAM design markets, officials said. It’s the second system, the Apollo 8000, that has drawn considerable attention. HP said it’s the first supercomputer to be cooled by liquid, as in water. “There is nothing like this on the market,” Antonio Neri, HP Server Business chief, told Bloomerg. 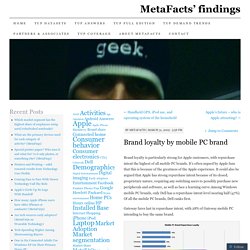 It’s often argued by Apple fans that this is because of the greatness of the Apple experience. It could also be argued that Apple has strong repurchase intent because of its closed, proprietary nature, requiring any switching users to possibly purchase new peripherals and software, as well as face a learning curve.Among Windows mobile PC brands, only Dell has a repurchase intent level nearing half (47%).

PC sales decrease as tablets rise in popularity. PC sales decrease dramatically The consumer desire for tablets and smartphones has resulted in shipments of laptops, netbooks and desktops computers dropping significantly in the last quarter. 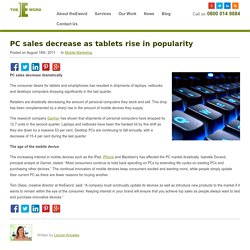 Retailers are drastically decreasing the amount of personal computers they stock and sell. This drop has been complemented by a sharp rise in the amount of mobile devices they supply. The research company Gartner has shown that shipments of personal computers have dropped by 12.7 units in the second quarter. Laptops and netbooks have been the hardest hit by this shift as they are down by a massive 53 per cent. 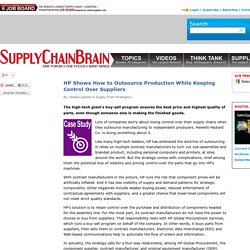 Hewlett-Packard Co. is doing something about it. Like many high-tech leaders, HP has embraced the doctrine of outsourcing. It relies on multiple contract manufacturers to turn out sub-assemblies and branded product, including personal computers and printers, at sites around the world. With contract manufacturers in the picture, HP runs the risk that component prices will be artificially inflated. HP's solution is to retain control over the purchase and distribution of components headed for the assembly line. Hewlett-Packard shows how to fatten shareholders while firing workers.

Shareholders of the big high-tech company Hewlett-Packard have done pretty nicely over the last year. 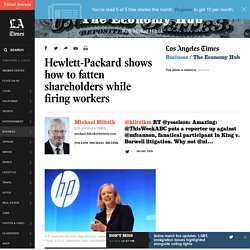 Their stock gains have outpaced the Standard & Poor's 500 Index by about 14 percentage points, and in 2014 they pocketed a handsome $2.7 billion through share repurchases and $1.2 billion in dividends. Other stakeholders and the rest of H-P's business, not so much. The company has cut about 44,000 jobs since 2012 and plans to bring the total toll to 55,000 by the end of this fiscal year. 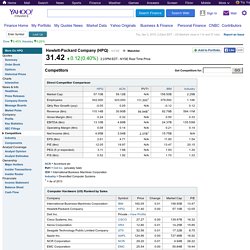 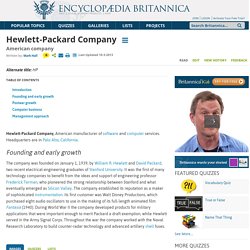 Headquarters are in Palo Alto, California. Founding and early growth The company was founded on January 1, 1939, by William R. Hewlett and David Packard, two recent electrical-engineering graduates of Stanford University. It was the first of many technology companies to benefit from the ideas and support of engineering professor Frederick Terman, who pioneered the strong relationship between Stanford and what eventually emerged as Silicon Valley.