Since 1992, Allied Components International has been the first choice of top tier OEMs and contract manufacturers worldwide for inductors, LAN magnetics, ferrite beads, custom transformers, toroids, common mode chokes, and RJ45 connectors. We specialize in state of the art, cost effective magnetic component solutions. We look forward to working with you on your next application requiring magnetics.

What are Photosensitive Integrated Circuits? When you need to convert light into a current or voltage in an electronic circuit, you can typically use a photodiode. 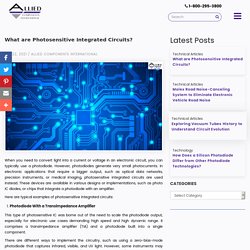 However, photodiodes generate very small photocurrents. In electronic applications that require a bigger output, such as optical data networks, precision instruments, or medical imaging, photosensitive integrated circuits are used instead. Molex Road Noise-Canceling System to Eliminate Electronic Vehicle Road Noise. While electronic vehicle (EV) engines are quiet and offer a pleasant driving experience, they do not drown out any road noises. 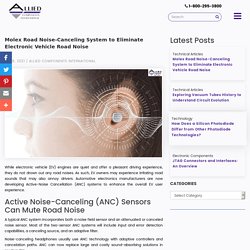 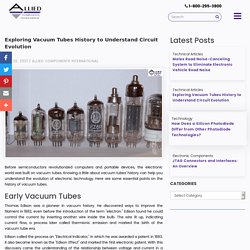 Knowing a little about vacuum tubes' history can help you understand the evolution of electronic technology. Here are some essential points on the history of vacuum tubes. Early Vacuum Tubes Thomas Edison was a pioneer in vacuum history. He discovered ways to improve the filament in 1882, even before the introduction of the term "electron.

" How Does a Silicon Photodiode Differ from Other Photodiode Technologies? Silicon is the primary material used in making semiconductors, which are the basis for different photodiode technologies. 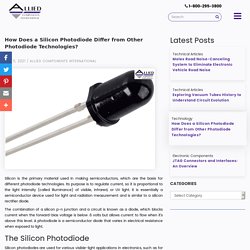 Its purpose is to regulate current, so it is proportional to the light intensity (called illuminance) of visible, infrared, or UV light. It is essentially a semiconductor device used for light and radiation measurement and is similar to a silicon rectifier diode. JTAG Connectors and Interfaces: An Overview. The standard hardware tool for testing, programming, and debugging embedded systems is known as JTAG. 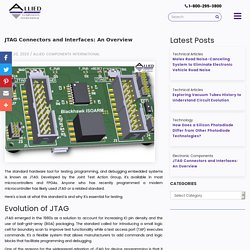 Developed by the Joint Test Action Group, it's available in most microcontrollers and FPGAs. How Capacitive Sensors Make Cars Smarter. Modern cars use capacitive sensors that enhance the human-machine interface (HMI) experience. 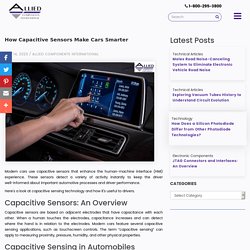 These sensors detect a variety of activity instantly to keep the driver well-informed about important automotive processes and driver performance. Here's a look at capacitive sensing technology and how it's useful to drivers. Capacitive Sensors: An Overview Capacitive sensors are based on adjacent electrodes that have capacitance with each other. When a human touches the electrodes, capacitance increases and can detect where the hand is in relation to the electrodes. The Role of Power Density in Power Management Systems. Modern power management systems are steadily improving with new technology and must be supervised by someone who understands how power density is related to size and efficiency in a power system as well as how it is measured and how it can overcome limitations. 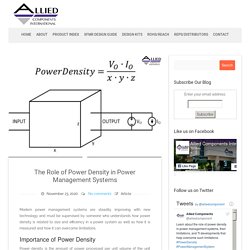 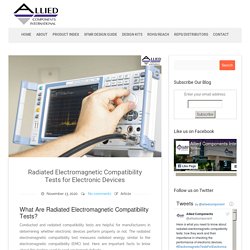 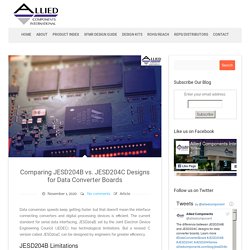 The current standard for serial data interfacing, JESD204B, set by the Joint Electron Device Engineering Council (JEDEC), has technological limitations. But a revised C version called JESD204C can be designed by engineers for greater efficiency. JESD204B Limitations While the JESD204B standard does improve upon earlier converter interface versions, its main limitations are lane speed and inadequate coding. Another missing piece of the puzzle is a simplified guide that explains how the interface for data conversion works and how to troubleshoot problems. A Generator That Converts Waste Heat Energy into Electricity. As sustainability becomes a growing concern among today’s global manufacturers, interest is growing in the science community to develop electric generators that use waste heat to power small electronic devices. 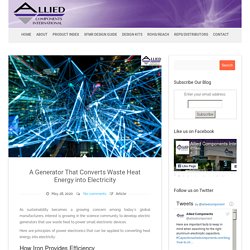 Here are principles of power electronics that can be applied to converting heat energy into electricity: How Iron Provides Efficiency An efficient material for electric generators is iron due to its abundance and affordability, according to a recent study at the University of Tokyo, published in the journal Nature. Easy Circuit-Analysis Techniques for Forward-Conducting Diode Circuits. Diodes function as semiconductor gates that allow or restrict current flow in one direction or the other. Currents and voltages in circuits with multiple diodes can be analyzed with schematic diagrams. Here are two different methods to analyze forward-conducting diode circuits. Switch Method The simplest but less accurate method for circuit-analysis is to view a diode as a voltage-controlled switch that controls the electric current in one direction. A diode has a nonlinear current-voltage relationship, which complicates circuit analysis. When the voltage through the switch exceeds zero, current flows without resistance or voltage drop.

A Generator That Converts Waste Heat Energy into Electricity. Active Rectifier Circuits: What You Need to Know About It. The purpose of an active rectifier circuit is to straighten out alternating current while converting it to direct current. Easy Circuit-Analysis Techniques for Forward-Conducting Diode Circuits. Google’s Coral AI Ecosystem Incorporates New PMIC's of Renesas Electronics. Developers of low-power electronic peripheral projects such as sensors or remote control devices can now consider using an RN487x Bluetooth Module made by Microchip for convenience.

Here’s a brief look at this programmable PMIC (Power Management Integrated Circuit) and why it’s favored for building small devices. Short Distance Connectivity Bluetooth, developed by IBM and Ericsson, is a wireless standard for transmitting data between fixed and low-powered mobile devices over short distances. It’s a reliable choice for short-range connectivity usually up to 330 feet, while some versions work up even to 1,000 feet. It’s commonly used for connecting personal computers, smartphones, and various peripherals with Wi-Fi networks.

Core Selection Since 1999, Bluetooth has been embedded in countless electronic products, including medical devices. Also Read – 14 Essential Electronic Components and their Functions RN487x Benefits 1. Everything You Need to Know About Flyback Transformer. A flyback converter is a simple switch-mode power supply for AC or DC applications. This low to the mid-power device that supports multiple outputs is designed to transfer power from the input to the output during off-time. It’s found in a television set, plasma lamp, and many other electronic devices that require high voltage. Contact Allied Components Intl. – California Headquarters. Careers. We have immediate openings for a high-energy, full-time Inside Sales Account Managers. We are searching for friendly and professional individuals. You will be part of a one-of-a-kind sales team in supporting our customers.

You will be responsible for servicing existing customers, cultivating new customer relationships, meeting goals, and growing sales opportunities. If you are someone who likes to create solutions for customers and be an integral part of a solutions-driven team, then we want you to join our winning company. Since 1992, Allied Components International has been the first choice of top tier OEMs and contract manufacturers worldwide for inductors, LAN magnetics, ferrite beads, custom transformers, toroids, common mode chokes, and RJ45 connectors. With our lean management and manufacturing style we are very price competitive, high quality component manufacturer with shorter lead times and local inventory. Competencies: Allied Components International – Distributor Coverage. World Micro, Inc. - US Headquarters.