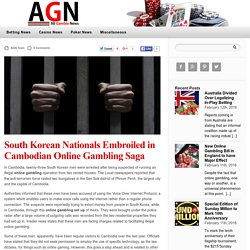 The Local newspapers reported that the anti-terrorism force raided two bungalows in the Sen Sok district of Phnom Penh, the largest city and the capital of Cambodia. Authorities informed that these men have been accused of using the Voice Over Internet Protocol, a system which enables users to make voice calls using the internet rather than a regular phone connection. The suspects were reportedly trying to extort money from people in South Korea, while in Cambodia, through this online gambling set up of theirs. They were brought under the police radar after a large volume of outgoing calls was recorded from the two residential properties they had set up in. Insider news states that these men are facing charges related to facilitating illegal online gambling. New Online Gambling Bill in England to have Major Effect — Gambling News.

Despite the fact that online gambling, one way or another, is a universal phenomenon at this point, there is yet to be any sort of uniformity in the way it is regulated across countries. 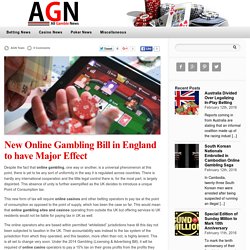 There is hardly any international cooperation and the little legal control there is, for the most part, is largely disjointed. Special Edition of Sunday Million to Mark 10th Anniversary — Gambling News. Joe ‘Black’ Reddick: Crack Dealer to Poker Winner — Gambling News. It’s not a normal thing when the Main Event of the World (WPT) Borgata Winter Poker Open Championship gets pushed to the side and a side event becomes the centre of all attention. 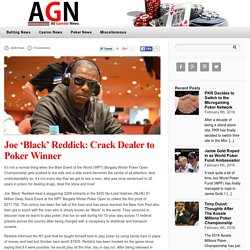 And understandably so, it’s not every day that we get to see a man, who was once sentenced to 20 years in prison for dealing drugs, steal the show and how! Joe ‘Black’ Reddick beat a staggering 3268 entrants in the $450 No-Limit Hold’em (NLHE) $1 Million Deep Stack Event at the WPT Borgata Winter Poker Open to collect the first prize of $217,792. PKR Decides to Switch to the Microgaming Poker Network — Gambling News. After a decade of being a stand-alone site, PKR has finally decided to switch their site to the Microgaming Poker Network. 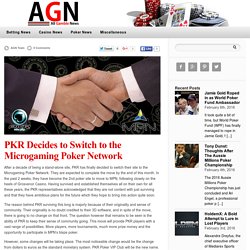 They are expected to complete the move by the end of this month. In the past 2 weeks, they have become the 2nd poker site to move to MPN, following closely on the heels of Grosvenor Casino. Having survived and established themselves all on their own for all these years, the PKR representatives acknowledged that they are not content with just surviving and that they have ambitious plans for the future which they hope to bring into action quite soon.

The reason behind PKR surviving this long is majorly because of their originality and sense of community. Their originality is no doubt credited to their 3D software, and in spite of the move, there is going to no change on that front. However, some changes will be taking place. Tony Dunst: Thoughts After The Aussie Millions Poker Championship — Gambling News. The 2016 Aussie Millions Poker Championship has just concluded and Ari Engel, a professional poker player has taken home the Main Event title with a whooping prize money of AU$1.6 million. 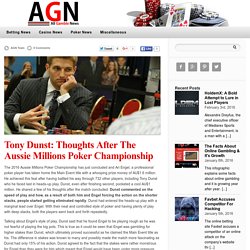 He achieved this feat after having battled his way through 732 other players, including Tony Dunst who he faced last in heads-up play. Dunst, even after finishing second, pocketed a cool AU$1 million. HoldemX: A Bold Attempt to Lure in Lost Players — Gambling News. Alexandre Dreyfus, the chief executive officer of Mediarex Sports and Entertainment, is a man with a mission. 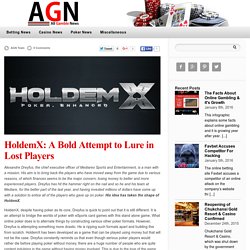 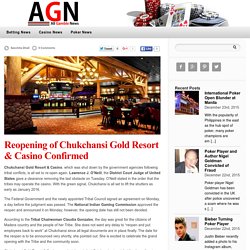 Lawrence J. O’Neill, the District Court Judge of United States gave a clearance removing the last obstacle on Tuesday. International Poker Open Blunder at Manila — Gambling News. With the popularity of Philippines in the east as the hub spot of poker, many poker champions are emerging from the country, with a lot of tournaments being organised there in recent times. 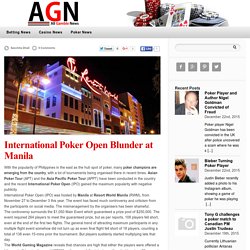 Asian Poker Tour (APT) and the Asia Pacific Poker Tour (APPT) have been conducted in the country and the recent International Poker Open (IPO) gained the maximum popularity with negative publicity. International Poker Open (IPO) was hosted by Manila at Resort World Manila (RWM), from November 27 to December 3 this year. Nigel Goldman Convicted of Fraud. Poker player Nigel Goldman has been convicted in the UK after police uncovered a scam where he was swindling the eBay customers more than £2.5 million ($2.7 million). 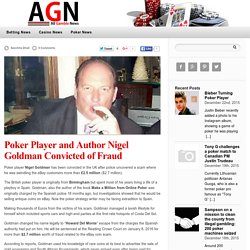 The British poker player is originally from Birmingham but spent most of his years living a life of a playboy in Spain. Goldman, also the author of the book Make a Million from Online Poker was originally charged by the Spanish police 18 months ago, but investigations showed that he would be selling antique coins on eBay. Now the poker strategy writer may be facing extradition to Spain. Making thousands of Euros from the victims of his scam, Goldman managed a lavish lifestyle for himself which included sports cars and high-end parties at the first-rate hotspots of Costa Del Sol. Bieber Turning Poker Player. Tony G challenges a poker match to Canadian PM Justin Trudeau. Currently Lithuanian politician Antanas Guoga, who is also a former poker pro famous as “Tony G” challenged Canadian Prime Minister Justin Trudeau to a game of poker, promising to “take everything you have”. 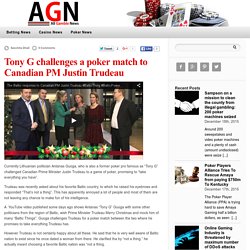 Trudeau was recently asked about his favorite Baltic country, to which he raised his eyebrows and responded “That’s not a thing”. This has apparently annoyed a lot of people and most of them are not leaving any chance to make fun of his intelligence. A YouTube video published some days ago shows Antanas “Tony G” Guoga with some other politicians from the region of Baltic, wish Prime Minister Trudeau Merry Christmas and mock him of many “Baltic Things”.

Guoga challenges Trudeau for a poker match between the two where he promises to take everything Trudeau has. However Trudeau is not certainly happy about all these. Sampson on a mission to clean the county from illegal gambling: 200 poker machines seized. Around 200 sweepstakes and video poker machines and a plenty of cash (amount undisclosed) were seized at five locations throughout Sampson County, North Carolina, on Thursday. 8 individuals are charged of operating illegal gambling establishments. 22 members of the Sampson County Sheriff’s Office along with 21 agents of the state’s Alcohol Law Enforcement made this possible. Sheriff Jimmy Thorton received multiple complains on various occasions by residents about the operation of illegal gambling being conducted in his county, and hence he requested the ALE’s assistance earlier this year.

According to Sheriff Thorton, illegal gambling is an addiction and hence he asked ALE to help his team and him. The ALE agents ran an undercover investigation for some days to locate the multiple locations where illegal sweepstakes and online poker were operating in the area. Poker Players Alliance Tries To Rescue Amaya from paying $750m To Kentucky — All Gamble News. The Poker Player Alliance (PPA) is trying hard to save Amaya Gaming half a billion dollars, as seen in the Kentucky court on Wednesday.

Amaya and its PokerStars subsidiary were previously ordered to pay $290 million to the state, by the Franklin Circuit Court. Amaya Gaming was charged for serving the online poker players of Kentucky without the permission of the state, even before PokerStars became popular in the US market. The state wants Amaya to pay for their deeds, by asking them to pay over $750 million. Online Gaming Industry is threatened by maximum number of DDoS attacks — All Gamble News. According to a new report released by content delivery network Akamai, the online gaming industry is threatened by DistributedDenial of Service (DDoS) attacks to a great extent.

Recent studies reveal that the online gaming industry is the most attacked industry by the DDoS. The recent report by the largest content delivery network, Akamai, on Q3 and entitled State of the Internet Security Report, suggests that the DDoS attacks are increasing with 1,150 taking place in Q3, which is an increase of 180% when compared to Q2, and 23% year-on-year increase. Pennsylvania might legalise online poker soon — All Gamble News. Betcade introduces android app store for real-money gambling apps — All Gamble News. Real money gambling apps are not available on Google Play Store, since it is not approved by Google. But Betcade has launched an early access program today, for its own Android-based app store that will be launched for real-money gambling. Betcade, the California based company has created a dedicated app store for the real time money gambling apps, unlike Google Play Store. This app store by Betcade will act as a one stop destination for all casino operators and gambling lovers.