Siblings May Not Share the Same Food Allergies - Allergy News. The Eureka Alert website has recently published an article explaining that siblings may not necessarily share the same food allergies. 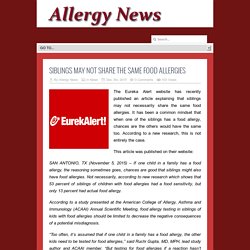 It has been a common mindset that when one of the siblings has a food allergy, chances are the others would have the same too. According to a new research, this is not entirely the case. This article was published on their website: SAN ANTONIO, TX (November 5, 2015) – If one child in a family has a food allergy, the reasoning sometimes goes, chances are good that siblings might also have food allergies. Not necessarily, according to new research which shows that 53 percent of siblings of children with food allergies had a food sensitivity, but only 13 percent had actual food allergy. According to a study presented at the American College of Allergy, Asthma and Immunology (ACAAI) Annual Scientific Meeting, food allergy testing in siblings of kids with food allergies should be limited to decrease the negative consequences of a potential misdiagnosis.

Some US Cities Plagued with Double Whammy of Allergens - Allergy News. Live Science reporter Rachael Rettner has recently reported that Some US cities are riddled both with high ozone levels and ragweed pollen. 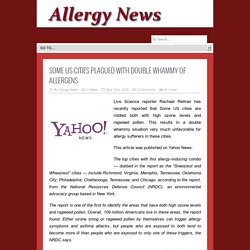 This results in a double whammy situation very much unfavorable for allergy sufferers in these cities. This article was published on Yahoo News: The top cities with this allergy-inducing combo — dubbed in the report as the “Sneeziest and Wheeziest” cities — include Richmond, Virginia; Memphis, Tennessee; Oklahoma City; Philadelphia; Chattanooga, Tennessee; and Chicago, according to the report, from the National Resources Defense Council (NRDC), an environmental advocacy group based in New York.

The report is one of the first to identify the areas that have both high ozone levels and ragweed pollen. Overall, 109 million Americans live in these areas, the report found. What’s more, the rising temperatures expected to come with climate change could increase both ozone production and pollen levels, worsening people’s allergies, the NRDC says. Probiotics May Help Hay fever Sufferers. Peter Russel has recently reported that probiotics or “good bacteria” may help ease the suffering of people with hay fever or even seasonal allergies. 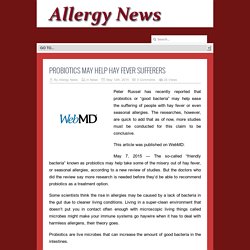 The researches, however, are quick to add that as of now, more studies must be conducted for this claim to be conclusive. This article was published on WebMD: May 7, 2015 — The so-called “friendly bacteria” known as probiotics may help take some of the misery out of hay fever, or seasonal allergies, according to a new review of studies.

But the doctors who did the review say more research is needed before they’d be able to recommend probiotics as a treatment option. Some scientists think the rise in allergies may be caused by a lack of bacteria in the gut due to cleaner living conditions. Probiotics are live microbes that can increase the amount of good bacteria in the intestines. Easy Allergy Relief Home Remedies. It’s a nice day and everyone wants to hit the beach, play in the park, or simply stroll along somewhere. 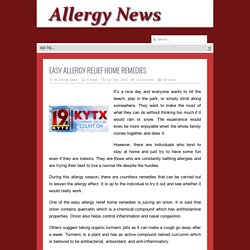 Marijuana Can Cause Allergies. Lecia Bushak has recently reported about the potential of cannabis as an allergen. 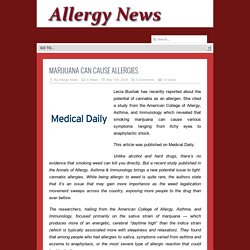 She cited a study from the American College of Allergy, Asthma, and Immunology which revealed that smoking marijuana can cause various symptoms ranging from itchy eyes to anaphylactic shock. This article was published on Medical Daily: Unlike alcohol and hard drugs, there’s no evidence that smoking weed can kill you directly. But a recent study published in the Annals of Allergy, Asthma & Immunology brings a new potential issue to light: cannabis allergies.

While being allergic to weed is quite rare, the authors state that it’s an issue that may gain more importance as the weed legalization movement sweeps across the country, exposing more people to the drug than ever before. In the study, the researchers examined several cases in which people either handling or smoking marijuana showed allergy symptoms. Carbon Emissions may be a Bane to Allergy Sufferers. Elizabeth Dunbar has recently reported that allergy sufferers may be getting worse symptoms due to carbon emissions. 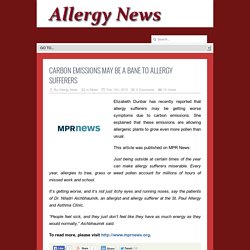 She explained that these emissions are allowing allergenic plants to grow even more pollen than usual. This article was published on MPR News: Just being outside at certain times of the year can make allergy sufferers miserable. Every year, allergies to tree, grass or weed pollen account for millions of hours of missed work and school. It’s getting worse, and it’s not just itchy eyes and running noses, say the patients of Dr. “People feel sick, and they just don’t feel like they have as much energy as they would normally,” Aichbhaumik said. Inmate Suffers Cardiac Arrest, Miscarriage Due to Banana Allergy. William Vallely has recently reported that a woman who was allergic to bananas suffered cardiac arrest and miscarriage in prison after inmates filled her cell with the fruit. 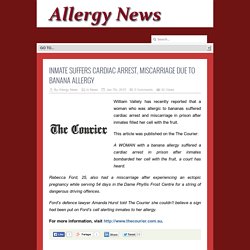 This article was published on the The Courier: A WOMAN with a banana allergy suffered a cardiac arrest in prison after inmates bombarded her cell with the fruit, a court has heard. Rebecca Ford, 25, also had a miscarriage after experiencing an ectopic pregnancy while serving 54 days in the Dame Phyllis Frost Centre for a string of dangerous driving offences. Ford’s defence lawyer Amanda Hurst told The Courier she couldn’t believe a sign had been put on Ford’s cell alerting inmates to her allergy.

For more information, visit. Reducing Allergens Within the Home. Individuals have been dealing with allergens for the longest time. 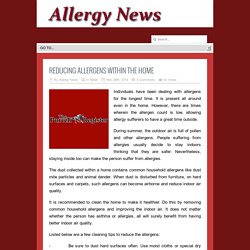 It is present all around even in the home. However, there are times wherein the allergen count is low, allowing allergy sufferers to have a great time outside. During summer, the outdoor air is full of pollen and other allergens. People suffering from allergies usually decide to stay indoors thinking that they are safer. Nevertheless, staying inside too can make the person suffer from allergies. The dust collected within a home contains common household allergens like dust mite particles and animal dander. Gut Bacteria Can Protect Against Food Allergies. Food allergies have affected so many individuals all around the world. 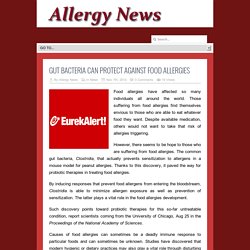 Those suffering from food allergies find themselves envious to those who are able to eat whatever food they want. Despite available medication, others would not want to take that risk of allergies triggering. However, there seems to be hope to those who are suffering from food allergies. The common gut bacteria, Clostridia, that actually prevents sensitization to allergens in a mouse model for peanut allergies. Thanks to this discovery, it paved the way for probiotic therapies in treating food allergies. By inducing responses that prevent food allergens from entering the bloodstream, Clostridia is able to minimize allergen exposure as well as prevention of sensitization. Such discovery points toward probiotic therapies for this so-far untreatable condition, report scientists coming from the University of Chicago, Aug 25 in the Proceedings of the National Academy of Sciences.

A Few Spring Allergy Remedies. Everybody wants to enjoy a day outside their home together with their families or by going out alone. 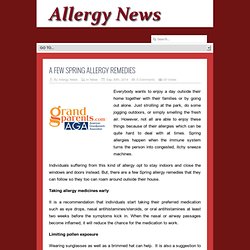 Just strolling at the park, do some jogging outdoors, or simply smelling the fresh air. However, not all are able to enjoy these things because of their allergies which can be quite hard to deal with at times. How to Prevent Allergies from Attacking. People suffering from allergies find it hard to go outside particularly when the pollen count is high. Even though they want to stay in, there are some instances that they have to go out for some personal reasons. Needing to do an errand or just want to stay outside and smell the fresh air are a few things people enjoy doing.

With the help of some tips, individuals can now worry a little less on how their allergies trigger. More so, it allows them to be more active and cautious on how they go about with their daily lives. There is nothing wrong in following some of the tips especially if it will benefit allergy sufferers. Below are some prevention tips that individuals may keep in mind. Avoiding known triggers It is best to treat allergy symptoms by simple avoiding triggers.