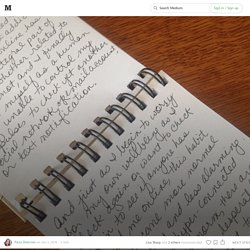 Stream of conscious musings. Headspace Is Enlightenment on Your iPhone. Last April, in New York City, three thousand people gathered for THRIVE, yet another TED-style ideas conference offering mental and spiritual rejuvenation to the business world. 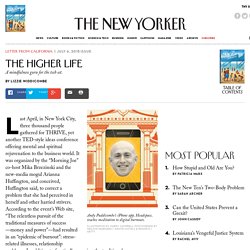 It was organized by the “Morning Joe” co-host Mika Brzezinski and the new-media mogul Arianna Huffington, and conceived, Huffington said, to correct a problem that she had perceived in herself and other harried strivers. According to the event’s Web site, “The relentless pursuit of the traditional measures of success—money and power”—had resulted in an “epidemic of burnout”: stress-related illnesses, relationship problems. Businessinsider. A year or two ago, the Gotham Gal and I were at dinner and were seated next to a young couple. 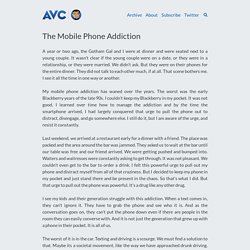 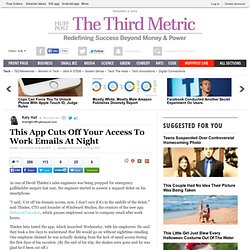 “I said, ‘Cut off his domain access, now. I don’t care if it’s in the middle of the ticket,’” said Thielen, CTO and founder of Windward Studios, the creators of the new app Enforced Vacation, which pauses employees’ access to company email after work hours. Thielen beta tested the app, which launched Wednesday, with his employees. Aliza Sherman sur Twitter : "We can make positive adjustments in our daily information consumption habits #unplug. Untether Your Life: 4 Easy Steps to Digital Zen. We interrupt this program to glance down at our smartphone to see if we have an email message or notification. 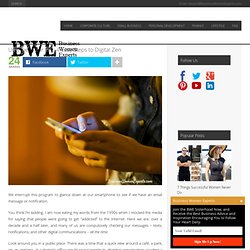 You think I’m kidding. I am now eating my words from the 1990s when I mocked the media for saying that people were going to get “addicted” to the Internet. Here we are, over a decade and a half later, and many of us are compulsively checking our messages – texts, notifications, and other digital communications – all the time. A Q&A With Neema Moraveji Of Stanford University’s Calming Technology Lab. As part of my Ph.D. research at Stanford, I surveyed a number of different physiological indicators that would help provide feedback about one's state of mind as well as provide actionable feedback to do something about it. 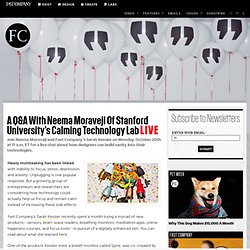 Of the ones I studied (heart rate variability, skin conductance, pupil dilation, eeg, etc.), the respiration signal was the most actionable and understandable. It was transparent as opposed to being a black box that needed abstraction to understand it. (From a product perspective, it always helps to give feedback about something that the user can control immediately. In this case the breath. If I tell you that your heart rate is too high, you can't control it directly, you have to actually use your breath to bring it down.)

NO INTERNET WEEK: FULL DOCUMENTARY. The Best Places on the Planet to Disconnect. The the best places in the world to get away from it all…. 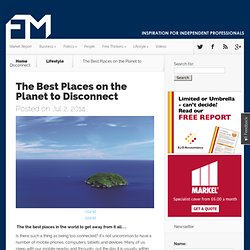 Is there such a thing as being too connected? It’s not uncommon to have a number of mobile phones, computers, tablets and devices. Many of us sleep with our mobile nearby and through- out the day it is usually within reach. Lessons Learned from a Stolen iPhone. Not only did I grow up without any type of a cell phone, I actually made it through college. 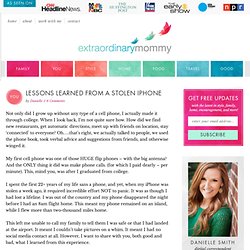 This Addiction Is As Dangerous As Cigarettes And Most Of Us Have It. The Power of Unplugging: For Your Business, Your Life, Your Sanity. DrLoisFrankel : How to improve your iPhone... Disconnect to Reconnect. January 1, 2014. 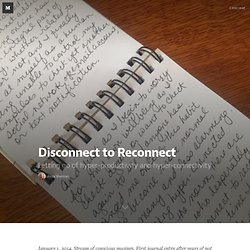 Stream of conscious musings. How Do You Unplug When You Live and Work Online? Click image for the full series.Graphic by hyoin min and used here with Creative Commons license. Taking a break from liking, friending, following, pinning, surfing, posting and all those other online pursuits is daunting enough for regular users. Imagine being a technology pioneer who, by definition, has to stay wedded to the web. This past year, a number of big names in the digital world took on this exact challenge. Paul Miller, senior editor at The Verge, did without the web for an entire year, documenting his experiment as it happened — and then after the fact — for his technology-focused media site. At roughly the same time, Baratunde Thurston took three weeks off of the Internet, an eternity for someone who is the CEO of his own comedic digital agency and product development company and who friends refer to as “the most connected man in the world.” Mobile users can't leave their phone alone for six minutes and check it up to 150 times a day.

People make, receive or avoid 22 phone calls every day and send or receive messages 23 times a daySetting the alarm, playing games, changing songs, taking pictures and plugging and unplugging phone all added to phone views By Ben Spencer Published: 00:07 GMT, 11 February 2013 | Updated: 07:49 GMT, 11 February 2013 Dependent: Research suggests that we check our phones every six-and-a-half minutes It’s the gadget that many of us would feel lost without. 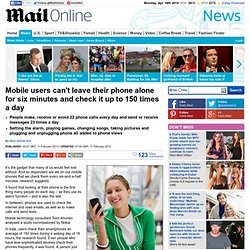 And so dependent are we on our mobile phones that we check them every six-and-a-half minutes, research suggests. Are you a phubber? Campaign launched to stop smartphone addicts snubbing others by checking their mobiles. A third of Britons polled by YouGov have admitted to being phubbersThe Stop Phubbing movement started in Australia and is gathering support By Claire Ellicott Published: 15:21 GMT, 4 August 2013 | Updated: 16:07 GMT, 4 August 2013 There are few things in life that are more irritating.

You are mid-conversation with a friend and they check their phone and begin replying to a text or checking their emails. Short Film About Smartphone Overuse Is Smart, Poignant, Depressing. The Truth About Women's Complicated Relationship With Technology. A poll released today by the Huffington Post and Real Simple finds that technology plays an essential -- though complicated -- role in women's lives. Women are so reliant on their devices that 69 percent of those polled sleep with their smartphones in their bedrooms, 68 percent keep them close by during dinner, 76 percent look at them at least once an hour, and of those women, almost half peek every 15 minutes or more.

(Given those numbers, perhaps it's not surprising that almost half say they would rather go a month without sex than a month without their phones.) And yet 80 percent of respondents are conflicted enough about social media that they have considered leaving Facebook, Twitter, or another platform at some point. Alarmingly, the poll found that women are so tied to their phones that three out of four admit they have texted while driving.

Despite all of the evidence to the contrary, only 27 percent of respondents say they are addicted to smartphones and social media. Afraid of Losing Your Phone? You May Have Nomophobia Like Half the Population. If you know the panicked and disconnected feeling of leaving your mobile phone at home, you might be one of the many suffering from nomophobia. A recent survey by U.K. -based mobile security service provider SecurEnvoy conducted among 1,000 people found that two thirds (66%) of respondents fear losing or being without their mobile phone — a fear called nomophobia. The phobia also includes the anxiety someone feels when not in the range of a cell tower to receive optimal reception. Not surprisingly, nomophonia is on the rise — up 13% from just four years ago — as more consumers become strapped to their smartphones.

However, women (70%) worry more about losing their phones than men (61%). 11 Things I Gained When I Lost My Smartphone. Like 56 percent of the American adult population, I used to be a dependent smartphone user who never went anywhere without Yelp-ing it first. Our Technology Obsession - Google Moderator.

The Future Starts Here. 10 Easy Steps Toward Unplugging. Moderator. Books - #Unplug: How to Work Hard and Still Have a Life by Chuck Salter. Disconnect to Reconnect. My Digital Hiatus + A Script and 4 Tips for Responsible Unplugging. How to Unplug During a Vacation (Really.) Your hard-earned beach vacation is finally here. Why I'm Quitting Social Media for 30 Days. Connecting: As Easy as Turning Off Your Phone.

Cell phones. The Internet. Unplug. My Digital Hiatus + A Script and 4 Tips for Responsible Unplugging. Why I'm Quitting Social Media for 30 Days. The #unplug Movement. How To Not Be A Slave To Technology. This Is Your Brain on the Internet (Maybe) How the Internet is Changing Your Brain. Google is changing your brain, study says, and don't you forget it. How Technology Is Warping Your Memory. The Power of the UNPLUG From Social Media and Mobile.