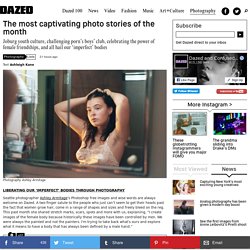 A two finger salute to the people who just can’t seem to get their heads past the fact that women grow hair, come in a range of shapes and sizes and freely bleed on the reg. This past month she shared stretch marks, scars, spots and more with us, explaining, “I create images of the female body because historically these images have been controlled by men. We were always the painted and not the painters. I'm trying to take back what's ours and explore what it means to have a body that has always been defined by a male hand.” New York-based photographer and director Nadia Bedzhanova shared a very personal project with us this month where she recorded late night texts with her long-distance lover, including shots of her shacked up all alone in a hotel room abroad due to work commitments. When it comes to porn women are often seen to exist in front of the camera, rather than behind it.

The photographer teaching women to feel beautiful naked. Photographer Mathilde Grafström struggled with body image issues and confidence for much of her life. 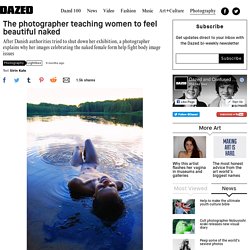 “I had a major identity crisis a few years back and I’m still working on trying to accept my own body as it is. I suffer from these beauty ideals that are put out by the media, and it affects my confidence. In the back of my head, I’m always thinking that I need to look a certain way. I know it’s not true, and I’m beautiful as I am, but for some reason I seem to have been brainwashed in this way”.

Grafström’s photo series, Female Beauty, combats the negative self-image that she and many others feel by photographing women naked, in nature. Despite her best intentions, Female Beauty came under fire from the Danish authorities. Dazed: Can you explain the message of Female Beauty? Mathilde Grafström: I’m trying to show them something they can’t see themselves, which is how beautiful they are. Guillaume Caron.

Isamaya Ffrench - Makeup Artist and Illustration. Girlzintheframe – 35mm – raw & uncut beauty – 0% retouching. Looking Back at Mary Ellen Mark's Iconic Photos of a Prostitute Named Tiny. Mary Ellen Mark is no longer with us, but her images live on.

Before her passing in 2015, the photographer was able to complete her final body of work and a new monograph for Aperture titled Tiny: Streetwise Revisited . An extension of a project Mark began in the early 80s, these photographs document pimps, prostitutes, vagrants, and drug users and pushers in the Seattle area. The project narrowed its focus, however, when she met Tiny (Erin Charles), a 13-year-old prostitute who talked of wanting diamonds and a horse farm. For Mark, Tiny became a 30-year focus of turmoil and intrigue that became integral to her artistic practice. Currently at the Norton Museum in West Palm Beach, Tiny: Streetwise Revisited is an exhibition of images that pull directly from Mark's lengthy relationship with Tiny. "Will they make it? " Tiny: Streetwise Revisited, both in show and publication, is as much a social documentation as it is fine art. 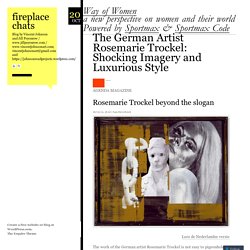 Conceptual, postmodernist, feminist: none of those terms is adequate to describe her multifaceted oeuvre. It is actually that hybrid and intangible quality that she is out to achieve. As can be seen yet again in “Flagrant Delight”, the fine exhibition that Wiels is currently devoting to her. Artists are often reduced to their best-known or most iconic work. Jenny Holzer. Cindy Sherman. American photographer. 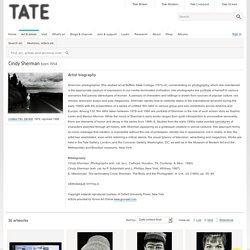 She studied art at Buffalo State College (1972–6), concentrating on photography, which she maintained is the appropriate medium of expression in our media-dominated civilisation. Her photographs are portraits of herself in various scenarios that parody stereotypes of woman. A panoply of characters and settings is drawn from sources of popular culture: old movies, television soaps and pulp magazines. Sherman rapidly rose to celebrity status in the international art world during the early 1980s with the presentation of a series of untitled ‘film stills' in various group and solo exhibitions across America and Europe. Among 130 ‘film stills' taken between 1978 and 1980 are portraits of Sherman in the role of such screen idols as Sophia Loren and Marilyn Monroe. BibliographyCindy Sherman: Photographs (exh. cat. by L. Isa Genzken’s Art Practice. It is quite unusual to see Isa Genzken naked. 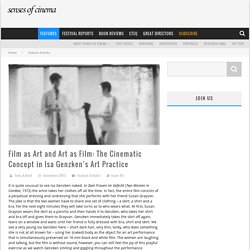 In Zwei Frauen im Gefecht (Two Women in Combat, 1972) the artist takes her clothes off all the time. In fact, the entire film consists of a perpetual dressing and undressing that she performs with her friend Susan Grayson. The joke is that the two women have to share one set of clothing – a skirt, a shirt and a bra. For the next eight minutes they will take turns as to who wears what. At first, Susan Grayson wears the skirt as a poncho and then hands it to Genzken, who takes her shirt and bra off and gives them to Grayson.